Part of the BASEBALL HISTORY series
Written by: Frank Keetz

Advancing German armies were about to occupy Paris. Mussolini and his Italian forces had just invaded southern France. Stalin’s Soviet troops occupied half of Poland and were set to overrun Estonia, Latvia and Lithuania.

Meanwhile, the United States was not yet a formal combatant in World War II, with Pearl Harbor more than 17 months away. Heavyweight champion Joe Louis was training to fight Arturo Godey. Thomas E. Dewey and Wendell Willkie were vying for the Republican presidential nomination to oppose Franklin D. Roosevelt, who was planning a historic third term. A Chevrolet Coupe cost $659, while a new Oldsmobile (“The Car That Has Everything”) was priced at $807. Depression era unemployment had decreased to a still-disturbing 14.2 percent.

It was a travel day for both the Boston Red Sox and Chicago Cubs. The teams were to play the first-ever game between two major league teams in Cooperstown, an exhibition contest approved and arranged by the major leagues while cooperating with the Cooperstown Baseball Committee.

Thus the Hall of Fame Game was born.

In 1908, the Mills Commission had determined (incorrectly, it turns out) that the first baseball game had occurred in 1839 in Cooperstown. A century later, the National Baseball Museum – now known as the National Baseball Hall of Fame and Museum – opened its doors to the public on June 12, 1939, as part of Baseball’s Centennial Celebration.

That same day, a “pick up” game between a batch of then current big leaguers was played at Doubleday Field – with Hall of Famers Eddie Collins and Honus Wagner serving as managers. A year later, the tradition of the annual exhibition game in Cooperstown began in earnest.

To get two major league teams to Cooperstown at the same time during the middle of the season was a problem – but a solvable one. The New York Central Railroad ran through Central New York, and the Cubs and Red Sox were traveling that same railroad through the Mohawk Valley on June 13: With the Cubs coming from Chicago on the heels on a series with the Giants, while the Red Sox traveled west from Boston after sweeping a two-game series from the Indians, leaving them in first place in the American League. 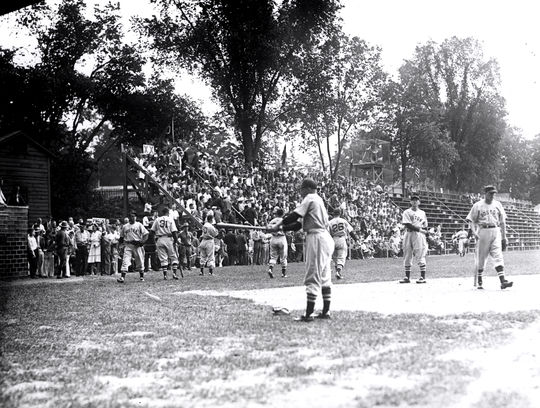 Both teams disembarked at the common stop of Fort Plain, just 30 miles away from Doubleday Field.

New York Central train No. 42 arrived in Fort Plain at 7:10 that morning. A group of sturdy, sun-tanned Red Sox players emptied into the station platform. Included in this entourage were sports reporters from six different Boston newspapers. A large number of curious locals milled about the station as the players, officials and reporters climbed into 10 private cars for the ride to Doubleday Field. A truck carrying team equipment followed.

The ride was through real “country” on a narrow, winding road over gently rolling hills. Small dairy farms dotted the rural landscape on that cloudy June morning. The caravan passed through tiny hamlets like Hallsville, Starkville, Van Hornesville and East Springfield before nearing Cooperstown and beautiful Otsego Lake. It was James Fenimore Cooper territory, land of “The Last of the Mohicans.”

Soon the Red Sox were in Cooperstown, where both teams were quartered at the historic Cooper Inn. A complete dinner, with table cloth, at the Inn was available for $1.

The hosting committee planned a luncheon and dinner for the teams before and after the 2 p.m. game. They also allocated time for the players to tour the village, the highlight of which would be a visit to the Hall of Fame – already featuring a growing collection of artifacts, photos and, of course, the plaques of the first 26 inductees. Cubs third baseman Stan Hack was the first batter in the first Hall of Fame Game on June 13, 1940 – and homered off of future Hall of Famer Lefty Grove on the second pitch of the game. (National Baseball Hall of Fame and Museum)

The village itself, described as a “place of beauty,” was a small marketing center for the rural area (as well as a moderately-sized seasonal vacation destination). Players walked half a block south from the Cooper Inn to Main Street, then strolled by a variety of small-town shops, stores and offices on their two-block walk to the Hall of Fame: A bakery, a Victory market, Smalley’s Movie Theater (advertising Dorothy Lamour in “Typhoon”), a lawyer’s office, Augur’s Corner Bookstore, a diner, the Ellsworth & Sill department store, a pharmacy, another market, a local bank (“1% return on FDIC insured deposit”) and a gas station selling 1940 Play Ball baseball cards for a few pennies (slab of gum included).

Meanwhile, the fourth-place Chicago Cubs, accompanied by three reporters, arrived from Fort Plain at the Cooper Inn shortly after noon. They ate a quick lunch, then were off to Doubleday Field on Main Street. The field was situated on a cow pasture where Abner Doubleday was thought to have laid out the original baseball diamond in 1839. Amateur and youth teams used the field for decades until a major upgrade was completed prior to the 1939 festivities – in part by the Depression-era Works Progress Administration (WPA).

Now seating 7,000 fans, Doubleday Field featured a special raised section on the third base side reserved for 50 expected reporters and connected by four Western Union wires. Grandstand seating cost $1.50, with first and third base seats for $1. The not-too-distant “bleacher” seats in the outfield could be had for 55 cents.

A large crowd was expected at the Thursday game. Most local merchants chose to close their stores while the game was in progress even though Father’s Day was just three days around the corner. A general holiday spirit was evident on Main Street as colorful flowers and 48-starred flags decorated the sidewalks.

Intermittent showers had been predicted – and some rain had fallen in the morning – but it was dry by the time game time rolled around.

The small dimensions of Doubleday Field portended a high-scoring game, and it didn’t take long for each team to dent the scoreboard. Cubs leadoff batter Stan Hack hit 40-year-old Lefty Grove’s second pitch out of the park, and Bill Nicholson followed four batters later with a two-run shot to give the Cubs a 3-0 lead. 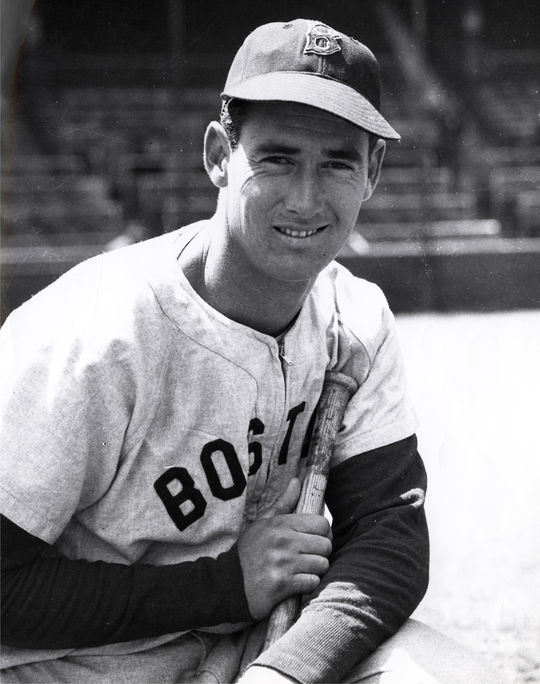 The Red Sox quickly tied the game with a three-run second inning highlighted by Ted Williams’ towering home run – with the ball landing on the porch of Mr. and Mrs. Kenneth Root. The teams traded runs during the next four innings, and entering the seventh the game was tied at 4.

With a light rain now falling, 11 total runners crossed the plate in the seventh, six from Chicago to give the Cubs a 10-4 lead and then five by the Red Sox to make it 10-9 – including a three-run shot by Williams for his second homer of the game.

As the rain became heavier, Boston’s Jim Tabor did not run out a bunt attempt – reportedly because he was under orders not to do so. Tabor’s play marked the third out of the bottom of the seventh, and the game was then called due to rain – giving the Cubs a 10-9 win. The game featured 22 hits and seven home runs and was played in a brisk one hour and 30 minutes. 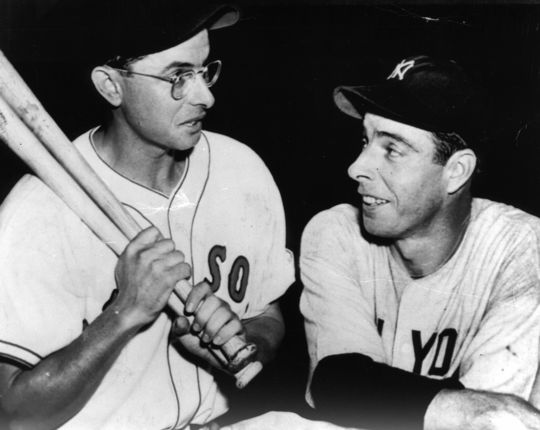 Dom DiMaggio, pictured with big brother Joe, played in the 1940 Hall of Fame Game for the Red Sox and suffered facial and leg injuries while crashing into the Doubleday Field fence while chasing a fly ball from the Cubs’ Billy Rogell. DiMaggio went to Bassett Hospital in Cooperstown for treatment and was out of the Red Sox’s lineup for eight days following the Hall of Fame Game. (National Baseball Hall of Fame and Museum)

Red Sox rookie Dom DiMaggio ended up at Mary Imogene Bassett Hospital in Cooperstown after crashing into the left-center field seating area while chasing a fly ball from the Cubs’ Billy Rogell in the sixth inning. Boston Herald writer Burt Whitman reported “great pain” for DiMaggio due to “badly bruised” facial abrasions and “severe cuts on both legs.”

Red Sox manager Joe Cronin was initially concerned about possible eye damage, but hours after the game DiMaggio left Cooperstown with his teammates on the way to Fort Plain to catch the train. The injuries, however, kept DiMaggio – then in his rookie season – out of the Red Sox’s lineup for eight days.

Both teams used most of their regular position players throughout the game, though future Hall of Famer Bobby Doerr – the Red Sox’s second baseman – was held out due to a nagging ankle injury.

The game received coverage in newspapers in Boston and Chicago, as well as short write-ups in the local papers and even a linescore in The New York Times.

Attendance figures vary, but the crowd appeared to total about 3,500 fans. Gate receipts, totaling $3,500, went to support the Museum, as did the $100 raised from the sale of programs at 5 cents apiece.

Following the game, the players were free to visit the village and Hall of Fame before dinner at the Cooper Inn. Then both teams took the ride back to Fort Plain, where the Cubs left on the 7:04 p.m. sleeper train for Boston to begin a series against the Bees the following day.

The Red Sox boarded the westbound Commodore Vanderbilt sleeper train at 8:20 p.m., heading for Chicago and a series against the White Sox.

The Cubs, forced to play a day game on June 14, lost to the Boston Bees 4-2 at Braves Field. But the Red Sox and White Sox played a night game at Comiskey Park, and the Red Sox prevailed 5-1.

Seven of those in uniform the 1940 Hall of Fame Game eventually earned Hall of Fame induction: Billy Herman and Gabby Harnett for the Cubs (though Hartnett, as the Cubs manager, did not play in the game) and Cronin, Jimmie Foxx, Doerr (who did not play), Grove and Williams from the Red Sox.

On Dec. 11, 1940, the American and National Leagues voted to make the Hall of Fame Game an annual part of the big league schedule – a tradition that remained in place for more than 60 years.

Frank Keetz is a freelance writer from Schenectady, N.Y. 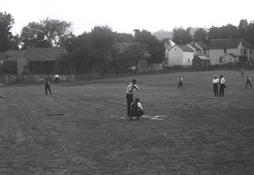 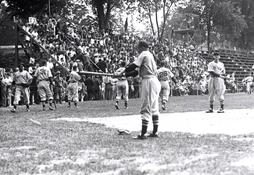 The inaugural Hall of Fame Game was played by the Boston Red Sox and the Chicago Cubs on June 13, 1940. 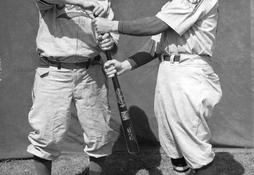