BBWAA Class of 2019 reflects on careers

Their baseball immortality assured only a day earlier, the newest members of the Hall of Fame Class of 2019 gathered together for the first time on Jan. 23 in New York City.

The first-ever unanimous Baseball Writers’ Association of America Hall of Fame selection, Mariano Rivera, was joined on a dais not far from his former home at Yankee Stadium by fellow electees Edgar Martinez and Mike Mussina. The late pitcher Roy Halladay was represented by his widow Brandy, who was in the audience along with about 200 media members for the annual day-after-the-election press conference.

Jack O’Connell, the secretary-treasurer of the BBWAA, began the day’s ceremonies by first extolling Rivera’s uniqueness in his unanimous election.

This year’s BBWAA ballot featured 35 players. Of the 425 ballots cast, 319 votes were needed for the 75 percent threshold necessary for election. And for the sixth consecutive year, the BBWAA elected at least two new members to the Hall of Fame.

Hall of Fame President Jeff Idelson, up next, gave his perspective on the long odds of ever joining the Hall of Fame lineup.

“One of the most difficult career paths in the world is to the major leagues,” Idelson said. “In the long history of professional baseball, 19,429 men thus far have been privileged to wear a major league uniform, and of them, one percent, one out of a 100, make it to Cooperstown. So that’s really how special this honor is.

“Guys, you’re now teammates forever on the greatest team ever assembled, the Hall of Fame team. I’m giving you all lifetime contracts and we’re thrilled to have you come to Cooperstown.” 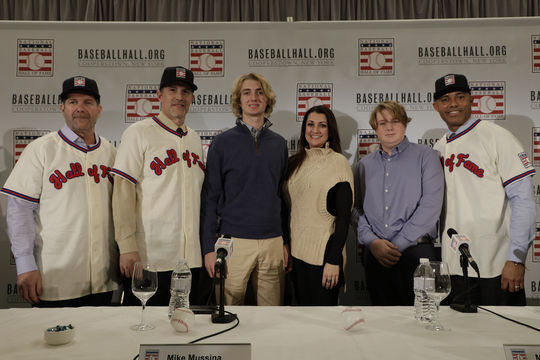 The BBWAA Class of 2019 was soon being outfitted with new white jerseys with a red-lettered “Hall of Fame” across the chest and blue caps with the Hall of Fame logo in front.

Asked to share their opening remarks to the media, the trio of Hall of Famers present talked of gratitude and thankfulness.

“I want to say thank you to the writers for giving me their support all these years, especially this year,” Martinez said. “This is a great honor, the ultimate honor as a baseball player. We play the game to win every year but at the end, after a lot of work, this is the highest honor.”

Martinez, a converted third baseman who joins Baines and Frank Thomas as the only members of the Hall of Fame to play the majority of their career games as a designated hitter, received 85.4 percent of ballots cast in his 10th-and-final year on the BBWAA ballot. A .312 hitter over 18 seasons with the Seattle Mariners, Martinez retired in 2004 with 2,247 hits, 514 doubles, 309 home runs and a .418 on-base-percentage. A native of Puerto Rico, he twice led the American League in batting, hitting .343 in 1992 and .356 in 1995.

As for Mussina, he was just surprised that he was even there this year.

“It caught me off guard quite a bit. I want say thank you to the 20 percent that voted for me that first year that kept me on the ballot so I could work my way up slowly,” Mussina said. “It’s a tremendous honor. It’s been a long time since I sat in a press conference with all these cameras flashing in New York. It’s just as exciting as it was the first time I came. I’m thrilled to be considered with the other great players in the game, with the guys I’m sitting with.” 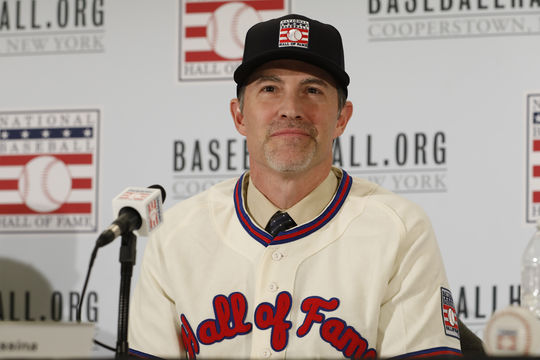 Mussina was a consistent and reliable righty starting pitcher for both the Yankees and Baltimore Orioles. Over 18 seasons, he posted a 270-153 record with 2,813 strikeouts. “Moose” was elected by the BBWAA with 76.7 percent of the vote in his sixth year on the ballot.

Rivera, the recipient of the historic unanimous BBWAA vote, surpassed Ken Griffey Jr., who held the previous mark with 99.32 percent of the vote two years ago.

“I want to thank God for this great accomplishment. It wouldn’t have been possible for me to accomplish it without His help,” Rivera said in his initial address to the crowd. “I remember coming from a small fishing village … in Panama. Just me being here speaking about the Hall of Fame is something that my mind can’t comprehend.”

Rivera used his dominating cut fastball and steely nerves as a topnotch closer during an 18-year career with the New York Yankees. The big league leader with 652 regular-season saves, Rivera’s stellar postseason numbers included 42 saves with a 0.70 ERA, including 11 saves in the World Series. Rivera was part of five Yankees World Championship teams.

Rivera, who regularly approached the Yankee Stadium pitching mound to the strains of Metallica’s “Enter Sandman,” became the last big leaguer to wear No. 42, a number he was grandfathered to him after it was retired in honor of Jackie Robinson in 1997. He will be joining fellow closers Lee Smith, Hoyt Wilhelm, Rollie Fingers, Goose Gossage, Dennis Eckersley, Bruce Sutter and Trevor Hoffman in Cooperstown’s bullpen.

But when it came to Martinez facing Rivera, the Seattle slugger had a .579 batting average, going 11-for-19, with three doubles, two homers and six RBI against the legendary Yankees relief ace. 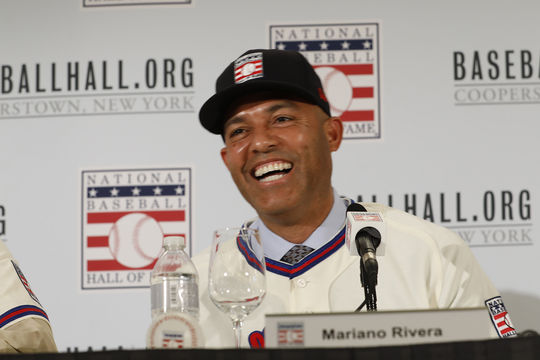 Mariano Rivera, the first player to be elected to the Hall of Fame with 100 percent of the votes, at the press conference in New York City. (Milo Stewart Jr./National Baseball Hall of Fame and Museum)

“Facing Mariano was always a challenge,” Martinez said. “I might have some numbers, good numbers, but when you’re coming late in the game to face Mariano you know that it’s going to be a challenge. Even when you get a hit it doesn’t feel like you’re getting a hit. He’s one of the best in history and his consistency through the years is the best ever. I might have got lucky a few times, but I never felt comfortable.”

Rivera answered, stating Martinez was “tough,” adding, “Especially in my first few years I didn’t want to see Edgar in a tough situation. I used to tell Joe (Yankees manager Joe Torre) to bring in Paul O’Neill from right field and put him right behind second base so we might get him out. When you face the type of hitter that Edgar was you had to really, really bring your game because he will have you for breakfast, lunch and dinner.”

“I didn’t like facing the guys that were willing to use the field from the left-field line to the right-field line, who don’t want to pull the ball all the time, who don’t want to hit the ball off the fence all the time, who take what we give them,” Mussina said. “When you’re as good a hitter as (Martinez) was, I’m going to throw it in the middle and hope he hits it really hard right to somebody because if I try really hard and he still gets a hit then it’s just going to make me mad.”

A smiling Martinez added, “Mike was the type of pitcher that never gave you the same look. That was difficult for a hitter. I just tried not to do too much. When it’s a big at bat or a big situation, that’s when he succeeds and make his pitches.”

Halladay, who passed away at the age of 40 in November 2017 in an airplane accident, was a top starting pitching with both the Toronto Blue Jays and Philadelphia Phillies. The 6-foot-6 righty workhorse ended his career after 16 big league seasons in 2013, finishing with a 203-105 record, a 3.38 ERA and 2,117 strikeouts in 2,749.1 innings pitched 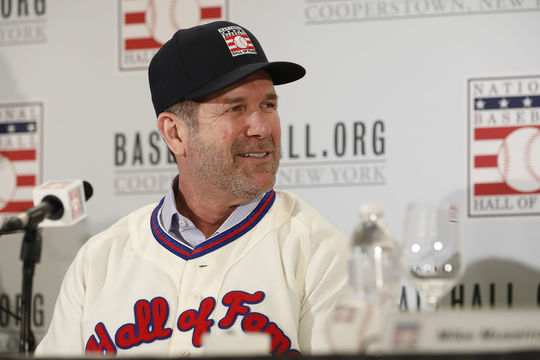 Edgar Martinez, one of the newest members of the Hall of Fame's Class of 2019, at the press conference in New York City. (Milo Stewart Jr./National Baseball Hall of Fame and Museum)

“Doc,” who won Cy Young Awards with Toronto in 2003 and Philadelphia in 2010, tossed in 2010 a regular season perfect game against the Florida Marlins in May, then delivered a no-hitter against Cincinnati in the opener of the NL Division Series.

The four BBWAA electees will be inducted into the Baseball Hall of Fame at 1:30 p.m. on Sunday, July 21, at the Clark Sports Center in Cooperstown along with a pair of Today’s Game Era Committee electees, Windy City legends Lee Smith and Harold Baines, who were chosen in December.

J.G. Taylor Spink Award winner Jayson Stark and Ford C. Frick Award winner Al Helfer, who passed away in 1975, will be honored during Induction Weekend at the Awards Presentation on Saturday, July 20, in Cooperstown.