For almost 50 years, Bill Freehan was the bedrock of baseball in Michigan. Few players were ever more associated with their home state than the brawny backstop from Detroit.

Freehan’s exploits jump off the page, even if his traditional statistics do not. A .262 lifetime hitter over 15 big league seasons, Freeman played during an era where most catchers were expected to prioritize defense and leadership.

He succeeded in those roles so well that he earned All-Star Game selections in 11 seasons, more than any catcher not named Berra (15), Bench (14), Rodríguez (14) or Piazza (12).

Born eight days before the attack on Pearl Harbor in 1941, Freehan grew up in the Detroit suburb of Royal Oak before moving with his family to St. Petersburg, Fla., when he was 14. But he would return to Detroit each summer to play sandlot ball and enrolled at the University of Michigan after graduating high school in 1959 – earning a scholarship to play both baseball and football.

By 1961, Freehan – only a sophomore – was one of the most celebrated players in the nation. He set a Big 10 record by hitting .585 for the conference champion Wolverines that year, demolishing the previous mark of .500 set by Purdue’s Bill Skowron. 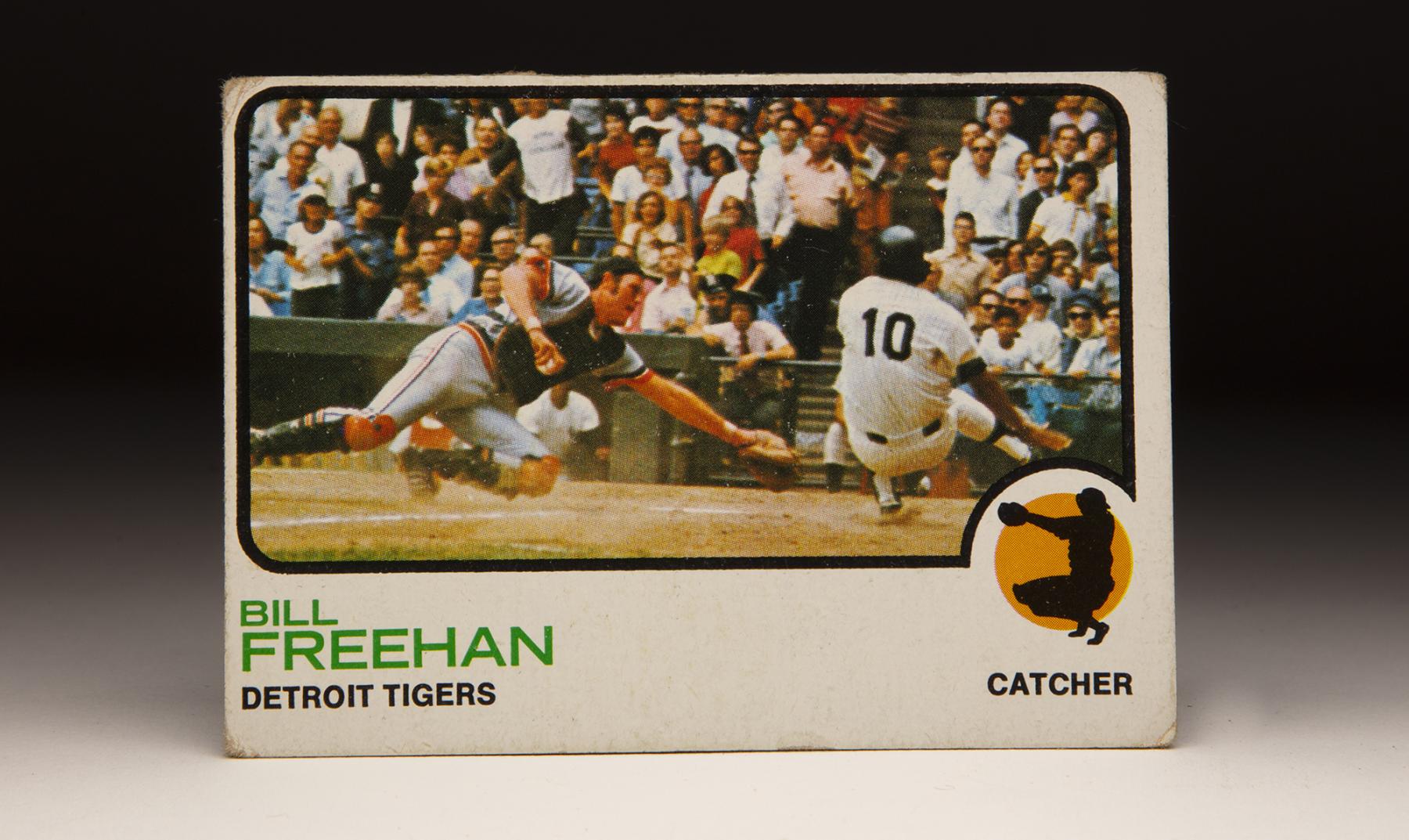 Many newspapers reported that Freehan turned down more money from other teams, but Freehan apparently didn’t see his riches for several years – promising his father that he would not touch the money until he graduated from college.

“I picked Detroit because I think the Tigers have a sound organization,” Freehan said the day he signed his contract. “I’ve wanted to for Detroit for as long as I can remember.” 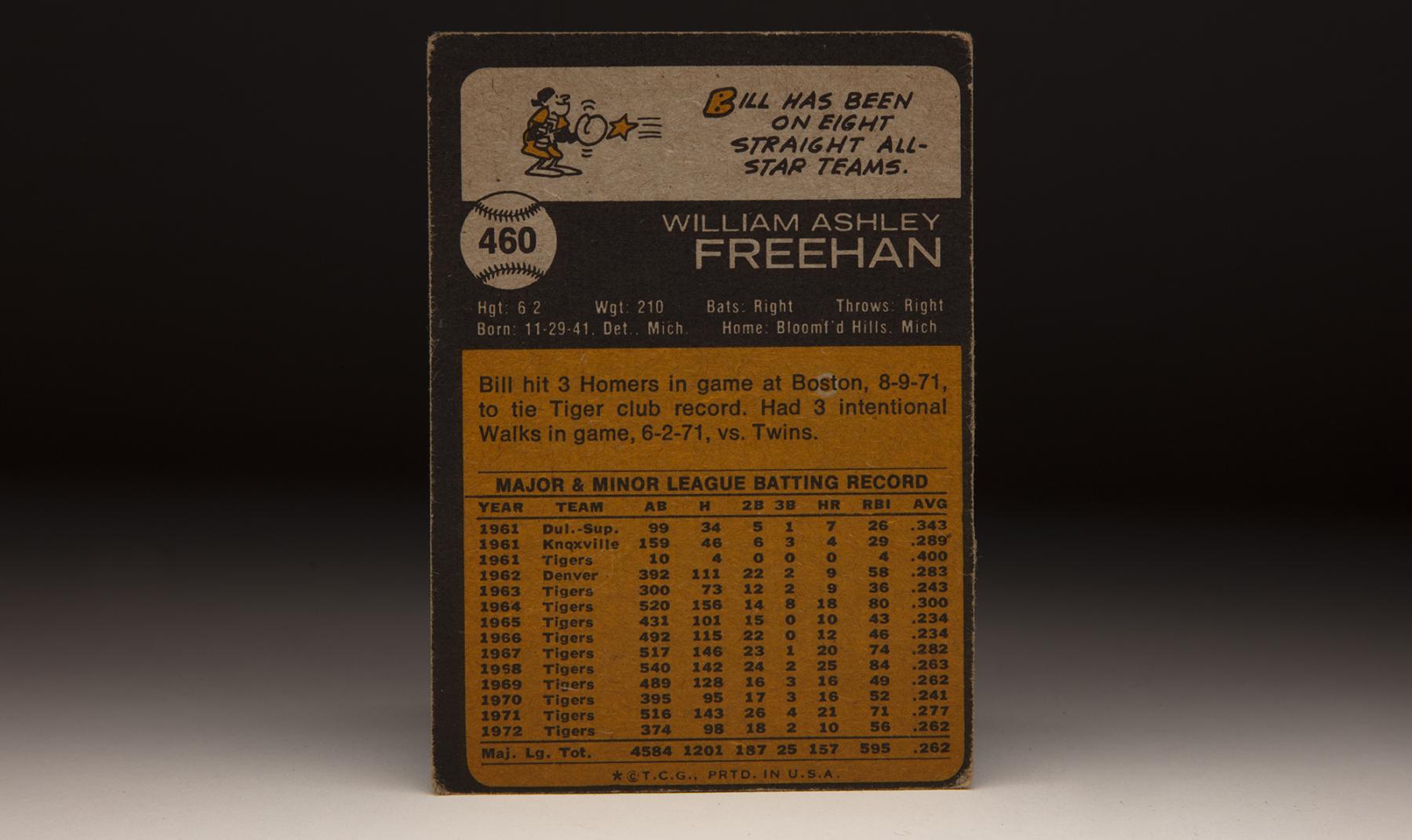 The Tigers sent Freehan to Duluth-Superior of the Class C Northern League, where he hit .343 before earning a promotion to Class A Knoxville. Under the rules of the day, Freehan – due to the size of his bonus – had to be put on the big league roster at the end of the season. He debuted in the big leagues on Sept. 26, 1961, going 2-for-4 against Kansas City before appearing in three more games before the end of the season.

Freehan spent all of the 1962 season at Triple-A Denver, hitting .283 in 113 games. He was ticketed for Triple-A again in 1963, but he made the club out of Spring Training and quickly proved he belonged, hitting in eight straight games from April 28-May 11 to take hold of the starting job.

“I’m still having a lot of trouble relaxing out there,” Freehan told United Press International in early May. “But I’m getting a lot more confidence in myself now that I’m getting a chance to play.”

Freehan finished the 1963 season with a .243 batting average, nine homers and 36 RBI in 100 games. Then in 1964, Freehan established himself as one of the top catchers in the AL by hitting .300 with 18 homers and 80 RBI in 144 games, earning his first All-Star Game selection and finishing seventh in the AL Most Valuable Player voting.

He remains one of only three AL catchers – along with Mickey Cochrane in 1925 and Bill Dickey in 1929 – to hit .300-or-better in their age-22 or younger season, among catchers who qualified for the league batting title. Freehan also finished second in the AL with a .993 fielding percentage, going 72 straight games without an error from June 14 through Aug. 28.

Freehan slumped at the plate in 1965 and 1966, hitting .234 in both seasons while he battled back and hand injuries. But he won his first two Gold Glove Awards in those seasons and garnered back-of-the-ballot AL MVP support in ’66, finishing 16th overall. That year, he made just four errors and led AL catchers with a .996 fielding percentage.

Then in 1967, Tigers batting coach Wally Moses suggested Freehan move closer to the plate to improve his power. The result was a .282 batting average with 20 home runs and 74 RBI – and a league-leading 20 times hit by a pitch. 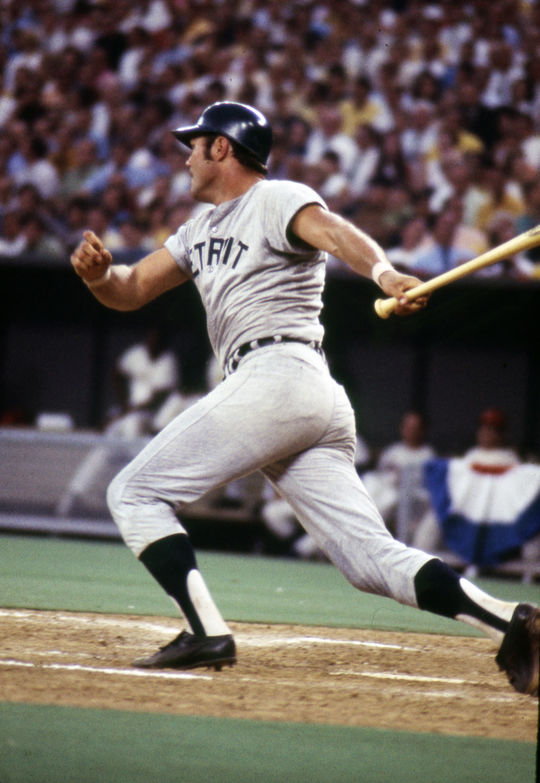 “He’s a changed hitter now,” Tigers teammate Al Kaline said of Freehan to the Windsor (Ontario) Star. “He has twice as much power as I have.”

Freehan’s defense and pitch calling remained topnotch as well, and the Tigers battled the Red Sox, Twins and White Sox throughout the summer for the AL pennant. A loss to the Angels in the final game of the season relegated the Tigers to second place, but Freehan finished third in the AL MVP voting and was issued a league-high 15 intentional walks.

In 1968, the Tigers put it all together. Freehan hit .263 with 25 home runs and 84 RBI in the Year of the Pitcher, finishing second in the AL MVP race to teammate Denny McLain, who received all 20 first place votes.

In the World Series against the Cardinals, Freehan tallied just two hits in 24 at-bats – and was hitless in 16 at-bats through five games. But his seventh-inning double in Game 7 scored Jim Northrup to push Detroit’s lead to 3-0 off St. Louis starter Bob Gibson. Northrup had tripled home Norm Cash and Willie Horton on a misplayed drive to deep center field at Busch Stadium, and Freehan’s clutch follow-up hit provided the knockout blow in what became a 4-1 victory for the Tigers.

Freehan caught Tim McCarver’s foul pop up for the final out, then rushed to the mound to embrace pitcher Mickey Lolich, who jumped into Freehan’s arms. It was Detroit’s first World Series title since 1945.

“I thought winning the pennant was something, but this is even greater,” Freehan told the Associated Press. 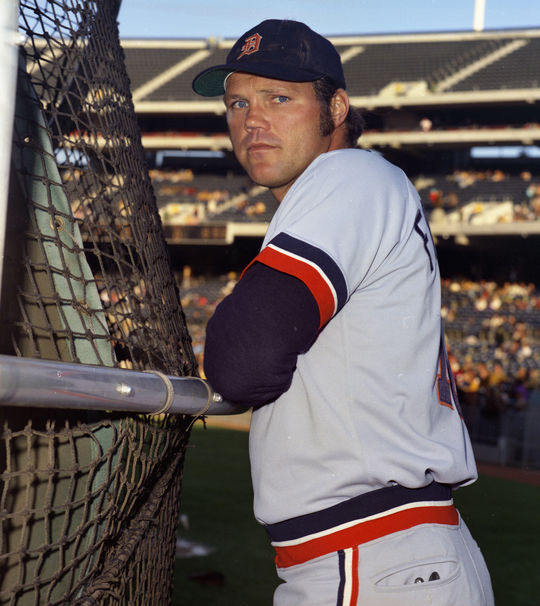 Freehan hit .262 with 16 homers and 49 RBI in 1969 as the Tigers finished in second place in the newly formed American League East. He was presented with his fifth-and-final Gold Glove Award following a season where he kept a record of his play that was published in 1970 as “Behind the Mask: An Inside Baseball Diary.” A look at the grind of the season in the mold of “The Long Season” by Jim Brosnan, Freehan’s book was published in the same year as “Ball Four” by Jim Bouton – and did not contain many of the controversial details that pushed Bouton’s book into the national spotlight.

But Freehan did single out teammate Denny McLain, whom Freehan alleged received preferential treatment from management. McLain, baseball’s last 30-game winner who won AL Cy Young Awards in 1968 and ’69, saw his career disintegrate over the next three seasons and was out of baseball by 1973. 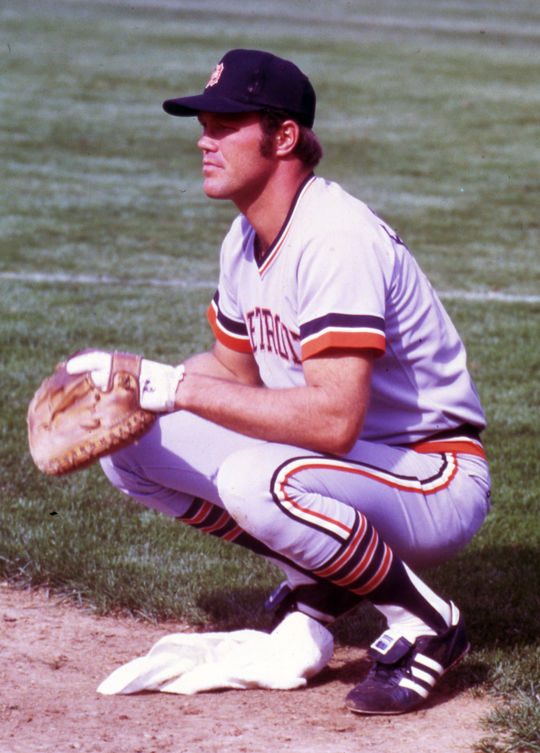 Bill Freehan retired as the all-time leader in fielding percentage among catchers with a mark of .993. (National Baseball Hall of Fame and Museum)

Then in 1972, the Tigers returned to the postseason by winning the AL East title. Freehan hit .262 with 10 home runs and 56 RBI, earning his seventh consecutive start in the All-Star Game along the way. A fractured right thumb on Sept. 21 cost him the final two weeks of the season, but Freehan returned to the lineup in Game 3 of the ALCS vs. the Athletics, doubling and scoring in the fourth inning and homering in the ninth in Detroit’s 3-0 win to cut Oakland’s series lead to 2-games-to-1. Behind the plate, Freehan helped orchestrate Joe Coleman’s 14 strikeouts on the mound for the Tigers.

“I told myself before the game I was just going to try and make contact,” Freehan told UPI. “I didn’t know what to expect.

“We’ve gotten this far, and we could go all the way.”

Game 4 would once again find Freehan at the center of the action. With the score tied at 1 in the eighth inning, Freehan missed a suicide squeeze attempt, resulting in Dick McAuliffe being thrown out at home plate. But in the bottom of the 10th, Freehan came to the plate with the bases loaded and no outs with Oakland holding a 3-1 lead. Freehan grounded to third, and A’s third baseman Sal Bando attempted to start a 5-4-3 double play. But catcher Gene Tenace was playing second base for the A’s – a result of Oakland’s ongoing tactic to pinch hit for its second basemen whenever they came to the plate – and Tenace missed the catch, allowing McAuliffe to score and reloading the bases.

A Norm Cash walk tied the game, and Jim Northrup – the hero from the 1968 World Series – followed with a single that scored Gates Brown to win the game.

“About that time,” Freehan said of his at-bat in the 10th inning, “I figured I had the chance to redeem myself.”

The next day, Freehan gave the Tigers an early lead with an RBI groundout in the first inning, but Oakland rallied for a 2-1 win to advance to the World Series. The Athletics’ first run of the game came in the second inning when Reggie Jackson stole home on the back end of a double steal, with Freehan rifling the ball to second base before Jackson slid home just ahead of the return throw.

Jackson injured his left hamstring while colliding with Freehan at the plate, ending his season. But the run proved crucial in a game the A’s won when George Hendrick – who replaced Jackson in the lineup – scored on a Tenace single in the fourth inning.

“You can’t hold the ball. That’s for Little Leaguers,” Freehan told the Associated Press. “It was early in the game and you’ve got to throw. He was safe by just inches, but that’s the way it goes.”

Tigers manager Billy Martin platooned Freehan for much of the 1973 season, and Freehan totaled career lows in homers (six) and RBI (29) in 110 games. But new manager Ralph Houk made Freehan the starter again in 1974, and Freehan hit .297 with 18 homers and 60 RBI.

The Tigers, however, were looking to get younger after their 72-90 season, and arranged to trade Freehan, Mickey Stanley and Bill Slayback to the Phillies in exchange for catcher Bob Boone. Tigers general manager Jim Campbell even called Freehan to get his permission for the deal – as a player with 10 years in the big leagues and the last five with the same team he could have vetoed the trade – but the Phillies pulled the plug on the deal at the last minute.

“As long as I’ve been in baseball, I’ve never been through anything like this,” Houk told the AP. “Let’s face it: The player we wanted was Boone and they suddenly wouldn’t give him up.”

Back as the Tigers’ starter in 1975, Freehan hit .246 with 14 homers and 47 RBI. But when Detroit traded for Milt May after the season, it became apparent that Freehan’s time in Detroit was ending. He appeared in just 71 games in 1976, then was given his release on Dec. 12, ending his career.

Freehan ran his own business in the automotive industry after retiring and later broadcast games for the Mariners and the Tigers. From 1989-95, he returned to the University of Michigan to serve as the Wolverines head baseball coach, compiling a 166-167-1 record over six years.

“It was the fulfillment of a lot of dreams,” Freehan said of the World Series title. “To experience it, to feel that honest emotion, there’ll never be anything like it again.” 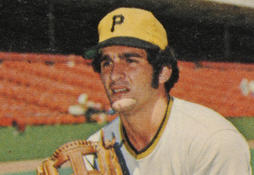 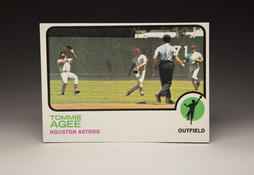 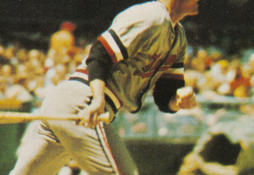 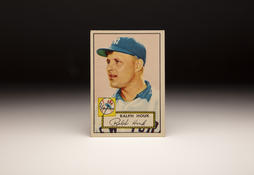 Topps' 1952 Ralph Houk card features the longtime manager during his playing years with the Yankees.