He was the luckless pitcher of his generation, toiling for an expansion team for the first half of his career and then seemingly on the wrong end of every bounce in the second.

But Dave Stieb finally found some fortune at the end of a stretch of dominance that might have been the best of his era.

Born July 22, 1957, in Santa Ana, Calif., Stieb made his mark as a hitter as an amateur. After playing two seasons for San Jose City College, Stieb transferred to Southern Illinois University. During his junior season in 1978, Stieb hit .394 as the Salukis center fielder – earning a place on the Sporting News All-American team.

“When I first started sandlot ball, I wanted to be a pitcher,” Stieb told the Canadian Press. “Actually, both my older brother Steve (who played three seasons in the Braves system as a catcher) and I wanted to pitch but my father wouldn’t let us. We were only seven or eight and he was the coach and he didn’t want us to wreck our arms trying to throw curves at that age.”

Stieb worked only 17 innings on the mound for SIU in 1978, all in relief – going 2-0 with three saves and a 2.04 ERA. It was the first time that Stieb had thrown a competitive pitch at any level. But the Blue Jays took a chance on him in the fifth round of the 1978 MLB Draft, and Stieb decided to sign for a reported bonus of $32,000 – future Hall of Famer Bobby Doerr, then with the Blue Jays organization, helped convince him to sign – despite the fact that Salukis coach Richard Jones was planning to move him to the mound the following season.

“When we first tried him as a pitcher (in 1978), he’d throw the ball at the knees,” Jones told the Southern Illinoisan in Carbondale, Ill. “He was one of the few players I’ve ever told he’d get an enormous bonus if he had waited another year.”

Stieb signed with the Blue Jays on the condition that he be allowed to both pitch and play the field, and Toronto sent him to Class A Dunedin of the Florida State League. After hitting .192 in 99 at-bats and going 2-0 with a 2.08 ERA in four starts on the mound, Stieb’s destiny was clear.

Desperate for pitching, the Blue Jays – who had debuted as an expansion team in 1977 – brought Stieb to Toronto in late June. Between college and the minor leagues, Stieb had 36 pitching appearances at any level to his credit when he debuted for the Blue Jays on June 29, 1979, against the soon-to-be American League champion Orioles. 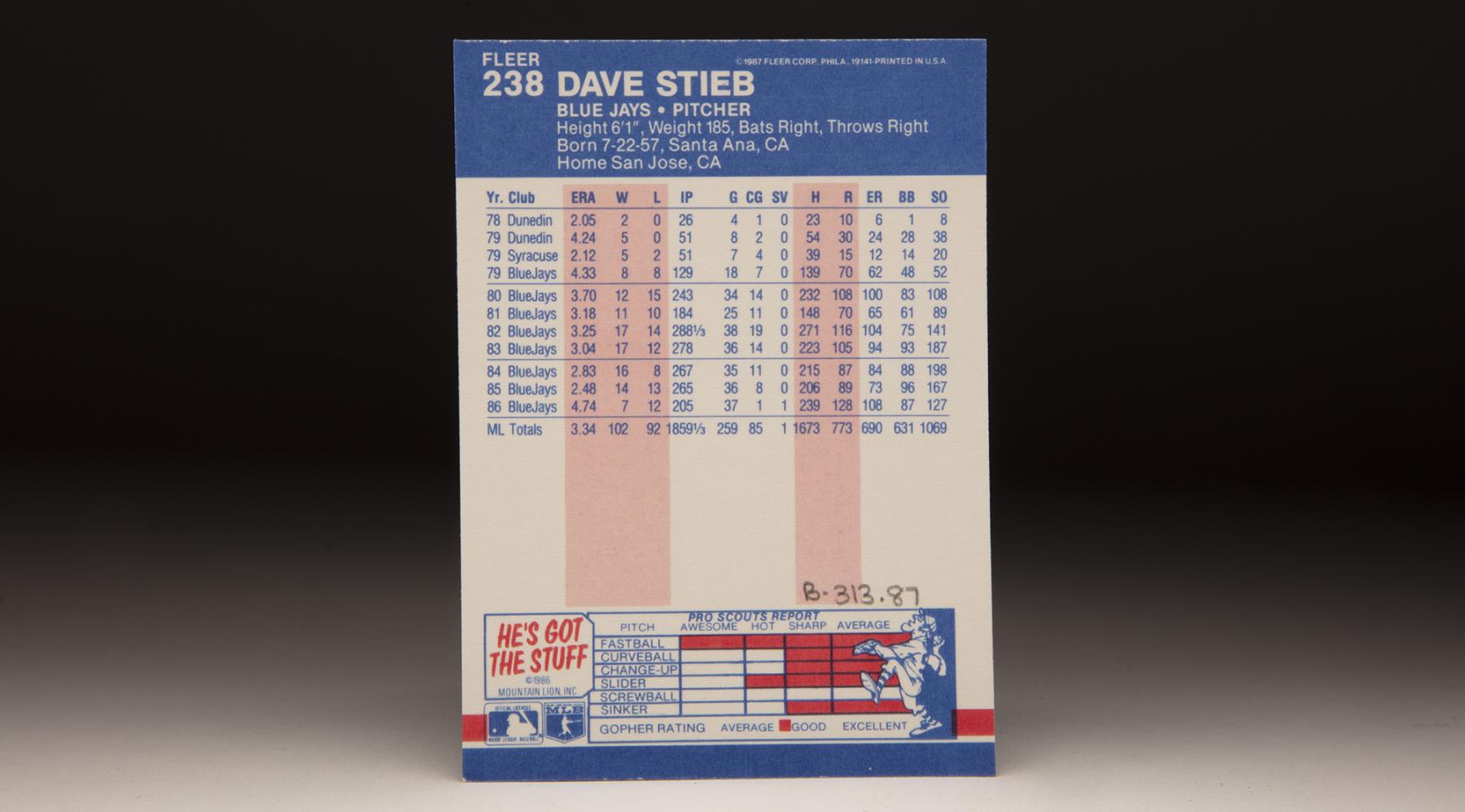 “You can’t afford to make a mistake, such as misplacing the ball,” Stieb told the Southern Illinoisan of facing big league hitters. “But I’m doing what I want to do. (It’s) just a matter of mastering what I already know.”

But Stieb, who had not yet turned 22, carried with him a weapon that would make his improbable transition much easier: A slider taught to him in his brief time in the minor leagues.
Very quickly, Stieb’s arsenal made him one of the most talked about young pitchers in the game.

“I think he’s going to be one of the outstanding pitchers in the league,” said Brewers manager Buck Rodgers early in the 1980 season. “In fact, he is right now.”

Stieb earned his second All-Star Game berth in 1981, going 11-10 with a 3.19 ERA in the strike-shortened season – and even finishing 27th in the American League Most Valuable Player voting. Stieb, however, was becoming exasperated with the Blue Jays’ slow climb toward respectability – and Toronto shopped him during offseason, nearly sending him to the Yankees in a deal that would have included reliever Ron Davis. 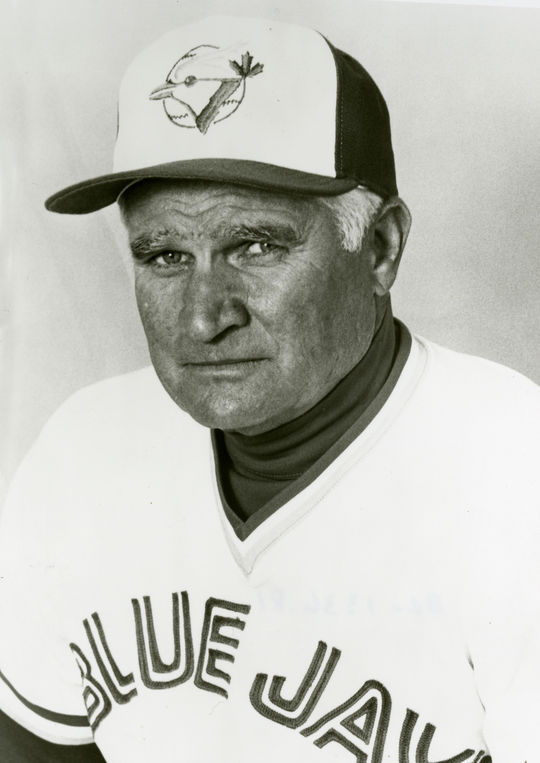 Hall of Famer Bobby Doerr helped sign Dave Stieb to a contract with the Blue Jays in 1978. (National Baseball Hall of Fame and Museum)

But Blue Jays general manager Pat Gillick – known throughout baseball as “Stand Pat” for his unwillingness to trade young talent – held on to his ace. It would prove to be one of the best deals he never made.

Stieb went 17-14 in a league-high 288.1 innings in 1982, posting a 3.25 ERA with a big league-best 19 complete games and an AL-leading five shutouts. He finishing fourth in the AL Cy Young Award voting while being voted AL Pitcher of the Year by the Sporting News.

Following the season, Stieb signed a five-year, $5 million extension with the Blue Jays.

“You won’t see us in last place anymore,” Stieb told The Tennessean in Nashville following the 1982 season. “I hope we’re only three or four more years away from the World Series.” 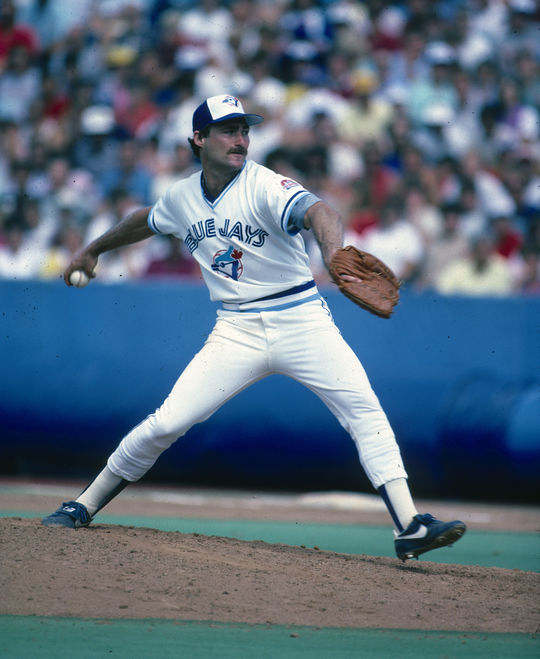 Dave Stieb was an accomplished outfielder during his collegiate days at Southern Illinois University before transitioning to the mound with the Blue Jays. (Rich Pilling/National Baseball Hall of Fame and Museum)

Stieb three-hit Kansas City over eight shutout innings, earning the win in Toronto’s 6-1 victory. Stieb allowed just one run in 6.2 innings in Game 4 – a game the Blue Jays won 3-1 after scoring all their runs in the top of the ninth inning. The victory gave Toronto a 3-1 lead in the series, but 1985 marked the first time the League Championship Series went to a best-of-7 format.

The Royals won the next three games, including a defeat of Stieb in Game 7 when a four-run sixth inning put the game out of reach.

Stieb also pitched the first of several near no-hitters that season, shutting down the White Sox through eight innings on Aug. 24 before Rudy Law and Bryan Little hit back-to-back home runs to lead off the ninth inning in a 6-3 Toronto victory.

It was a taste of things to come.

In 1986, Stieb struggled to a 7-12 record with a 4.74 ERA. His trademark slider seemed to lose some of its bite, and he suffered through the pain of bone chips in his elbow. He recovered to go 13-9 with a 4.09 ERA in 1987 – and the Blue Jays led the AL East for much of that season, siting three-and-a-half games ahead of the Tigers with eight to play before losing their final seven contests to give Detroit the title. 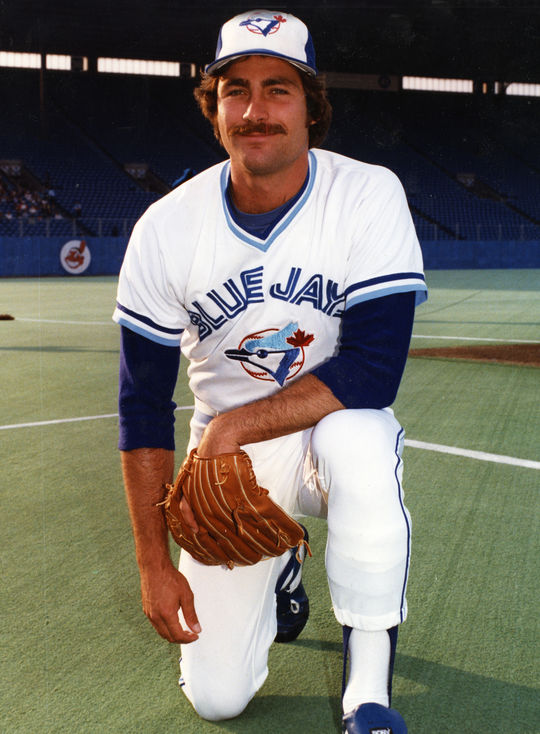 Now 30 years old, Stieb reverted to his early 1980s form – going 16-8 with a 3.04 ERA in 1988. In his final three outings of the year, Stieb was 3-0 with three shutouts, allowing only six hits over 27 innings. He completed the year with 31 straight scoreless frames and nearly pitched two no-hitters. He lost a no-hit bid on Sept. 24 against the Indians when – with two outs in the ninth – Julio Franco’s groundball to second baseman Manuel Lee took an unusual hop and bounced into center field.

In his next start on Sept. 30, Stieb again took a no-hitter through 26 outs – this time losing his place in history when Baltimore’s Jim Traber blooped a ball into short right field for a single.

“It’s a heartbreaker. It’s hard to put into words,” Stieb told the Associated Press. “It was a good pitch. I don’t know how (Traber) hit it.

A little more than 10 months later, Stieb again had a no-hitter through 8.2 innings against the Yankees on Aug. 4, 1989. This time, Roberto Kelly ended Stieb’s hopes with a clean double to left field. 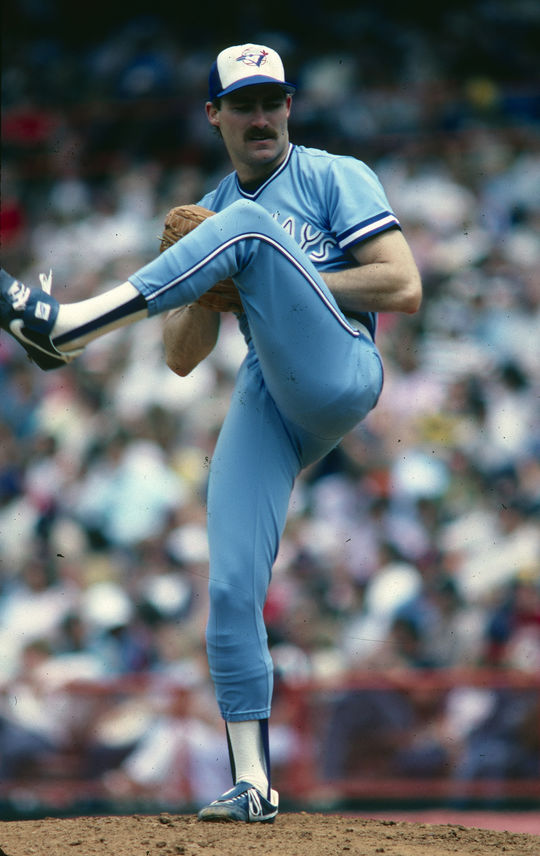 Utilizing a darting slider that limited solid contact, Dave Stieb was among the most effective and durable pitchers of his era. (Lou Sauritch/National Baseball Hall of Fame and Museum)

“It’s disappointing, but I’ve been through it before,” Stieb told the AP. “I was a little less nervous this time because of the other times.”

Softening the blow was the overall play of the Blue Jays, who rallied to win the AL East that year after Cito Gaston replaced Jimy Williams as manager in May. Stieb finished the season at 17-8 with a 3.35 ERA but was outdueled by Oakland’s Dave Stewart in two ALCS matchups as the Athletics advanced to the World Series. Stieb, however, had reestablished himself as one of the game’s top pitchers.

In 1990, Stieb posted a career-high in wins, going 18-6 with a 2.93 ERA and finishing fifth in the AL Cy Young Award voting. And on Sept. 2, Stieb finally got his no-hitter – blanking the Indians when Jerry Browne lined out to right to end the game.

“The thing that makes (Stieb) so tough is he has a hard slider that doesn’t break a whole lot, another slider that breaks a foot or more, and a curve,” Cleveland’s Tom Brookens told the Akron Beacon Journal. “Stieb’s slider probably breaks more that anybody’s I’ve ever seen.”

But despite Stieb’s excellent season, Toronto finished second in the AL East – and Gillick decided a major shakeup was in order.

On Dec. 5, 1990, Gillick traded Tony Fernández and Fred McGriff – two franchise cornerstones – to the Padres in exchange for Roberto Alomar and Joe Carter. In that moment, the Blue Jays’ championship dreams were put into motion.

Stieb, however, would play only a minor role for the team that he pulled from the bottom of the AL standings.

Stieb started the 1991 season with a 4-3 record and 3.17 ERA in nine starts. But shoulder tendinitis hampered him in late May after he landed awkwardly on his pitching shoulder after a play at first base against the Athletics on May 22. After being scratched from a June 1 start against the Yankees a few minutes before first pitch, he did not appear again that season – sidelined by the sore shoulder and later a back injury.

The Blue Jays won the AL East that season before losing to Minnesota in the ALCS. Stieb, who by this time was Toronto’s all-time leader in wins, starts, innings pitched and complete games, returned in 1992 but was largely ineffective, going 4-6 with a 5.04 ERA due in part to elbow issues. The Blue Jays finally got over the hump by beating the Athletics in the ALCS, but Stieb – who hadn’t pitched since Aug. 8 – was left off the World Series roster.

Toronto defeated Atlanta for the title, however, and Stieb – who was in uniform in the dugout despite not being eligible to play – celebrated the victory.

Stieb and Toronto parted ways after the season, with the now-35-year-old right-hander signing a one-year deal with the White Sox. But after going 1-3 with a 6.04 ERA in four starts, Stieb was released.

His career seemingly over, Stieb served as a Spring Training instructor for the Blue Jays – and in 1998, with his arm rested from four years of inactivity, Stieb convinced Toronto’s front office to give him one last shot. He appeared in 19 games that season, mostly in relief – going 1-2 with two saves and a 4.83 ERA.

“If I don’t make it,” Stieb told the AP while working his way back to Toronto in the minor leagues that spring, “it’s not the end of the world.”

In any conversation about the best pitchers of the 1980s, Dave Stieb plays a prominent part. 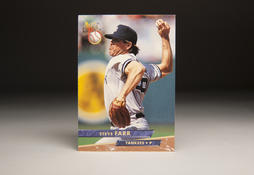 It’s long past due to put pen to paper in offering some praise for “The Burglar,” Steve Farr. 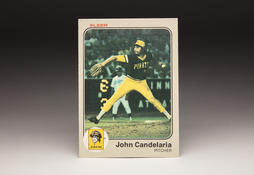 Nineteen eighty three was a very good year for baseball cards, and John Candelaria's Fleer card from that year stands out. 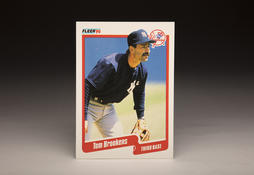 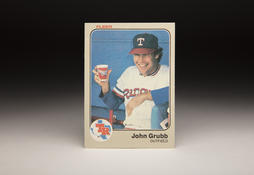 Of all the Johnny Grubb cards, the most memorable is the one that was featured in the 1983 Fleer set.