June 2010 was not a good month for Chipper Jones. He’d hit a slump, recording batting averages as low as .228, and would suffer from a torn anterior cruciate ligament in his knee a couple of weeks later. At age 38, headlines began to swirl about whether or not it was time for him to hang his glove.

“Jones Seems Close to Retiring,” read The New York Times, while the Associated Press reported that “Chipper Jones meets with Atlanta Braves about his future.”

But all speculation aside, Jones was always revered for playing baseball the “right way,” whether it was his attitude in the clubhouse or his hustle on the field. And that wasn’t about to change just because of a slump or an injury.

“I’m extremely glad that I continued,” Jones said to The New York Times. “You don’t want everybody’s last impression of you limping off the field behind third base in Houston or being carted off the field in Kansas City, not able to play the game anymore. Each player wants to leave on his own terms.” 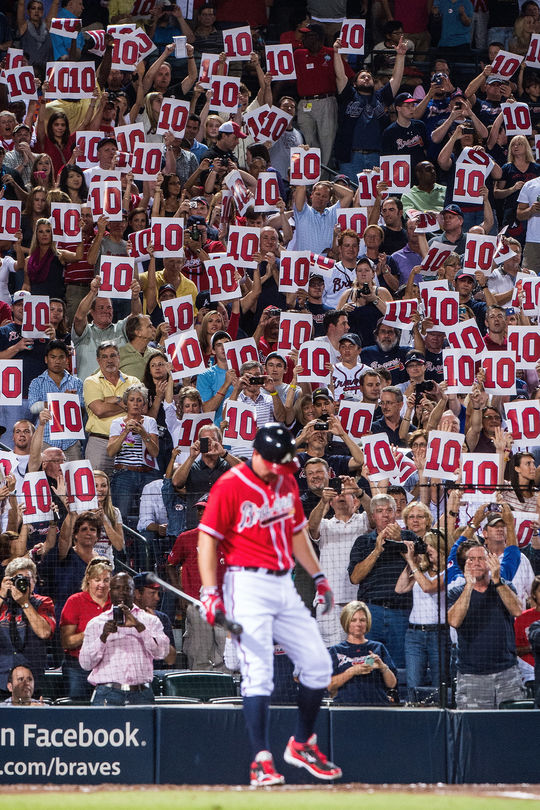 Atlanta Braves fans hold signs for Chipper Jones, No. 10 of the Atlanta Braves, as he bats against the New York Mets in his final series at Turner Field, on Sept. 28, 2012. (Pouya Dianat / Atlanta Braves)

Nearly two years later, just about a month short of his 40th birthday, Jones announced that the 2012 season would be his last. It was an emotional year for Jones. He had truly grown up with the Braves organization, as the team selected him in the first round of the 1990 June Amateur Draft, a year they finished with a winning percentage of .401. As Jones rose through their farm system, he witnessed Atlanta blossom from a team with a losing record to a serious postseason contender, and in 1995 would claim his spot in the starting lineup with the soon-to-be World Series champions.

Jones would finish second in the National League Rookie of the Year voting in 1995, and continued to post outstanding numbers over the next 18 seasons. A switch-hitter from an early age, he hit .304 left handed and .305 right handed, joining only Hall of Famer Frankie Frisch as hitters who’ve hit .300 or better from both sides of the plate.

For his career, he drove in 1,623 runs and posted a batting average of .303. The eight time All-Star also posted an OPS of .930 and a career slugging percentage of .529. He was revered not only for his consistency, but for his ability to produce runs when the Braves needed it most.

Chipper Jones at bat against the Philadelphia Phillies at Turner Field on May 2, 2012. (Pouya Dianat / Atlanta Braves)

“What he’s done this year for us is a microcosm of what he’s done since 1995,” Braves president and Hall of Famer John Schuerholz told The New York Times in 2012. “He’s gotten the big hit, in the big game, against the big pitcher, against all odds. Replaying the videotapes of the last 20 years in my head, he’s the guy that got most of them.”

Jones was versatile defensively as well, alternating between third base and left field throughout his career. He played 1,992 defensive games in the hot corner, finishing in the top 10 in the NL in fielding percentage five times and assists four times at the position. Jones was elected to the Hall of Fame in 2018. 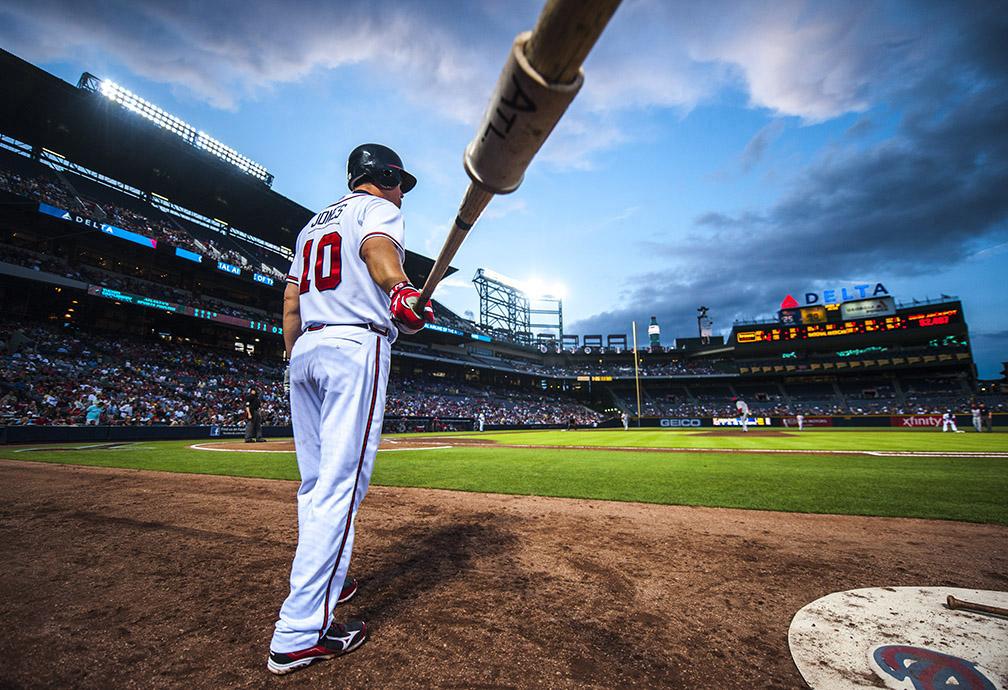 Chipper Jones stands in the on deck circle during a game against the Cincinnati Reds at Turner Field on May 15, 2012. (Pouya Dianat / Atlanta Braves)

Amidst his incredible numbers, Jones said he prided himself more on remaining with the Braves organization from the beginning to the end of his career than passing milestones.

"I often admired, when I was coming up, guys like Cal Ripken and Tony Gwynn, who were able to work with their organization so that they could stay in one place,” he told ESPN. “Do I think I could stick around for another two or three years and get 3,000 hits or 500 homers if I really wanted it? Yeah. No doubt. Because I still have the ability to be productive. But that would mean me probably having to go somewhere else. And it means more to me to spend 19 years in one organization, in one uniform.” 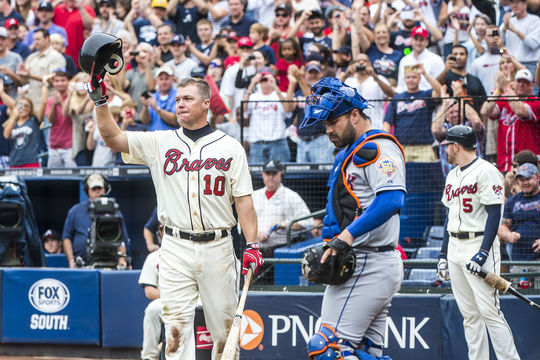 Chipper Jones waves to fans during the game against the New York Mets during his final game at Turner Field on Sept. 30, 2012. (Pouya Dianat / Atlanta Braves) 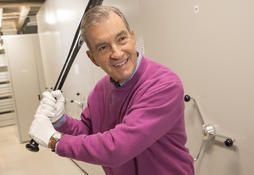 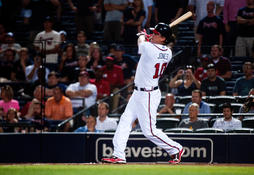 Chipper Jones made history in 2008 as the third major league switch-hitter to homer 400 or more times. 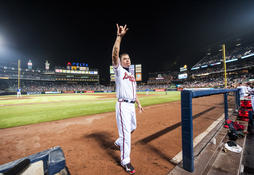