Schuerholz, who has worked in baseball front offices for more than five decades, was elected to the National Baseball Hall of Fame, along with former Commissioner Bud Selig, by the Today’s Game Era Committee on Dec. 4.

Eight weeks later, on the morning of Thursday, Jan. 26, the longtime executive, along with his wife Karen, received a tour of the Cooperstown baseball institution from Hall of Fame Vice President of Exhibitions and Collections Erik Strohl as part of an Orientation Visit all new electees are offered in order to prepare them for their Induction Weekend.

Schuerholz will be inducted into the Hall of Fame – along with fellow Class of 2017 members Jeff Bagwell, Tim Raines, Iván Rodríguez and Bud Selig – on July 30 in Cooperstown. 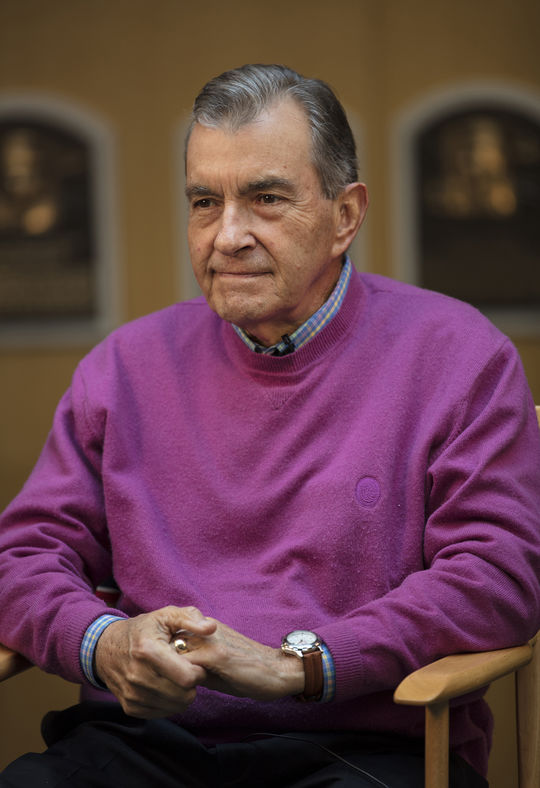 “I’m sitting in a director’s chair, I’m looking down this grand hallway in Cooperstown in the Hall of Fame having just been shown where my plaque will be installed on July 30 of this coming summer and how do I feel,?” said the 76-year-old Schuerholz, dressed casually in black slacks and magenta sweater. “I feel spectacular, I feel awed, I feel as thankful and appreciative of all the people who have helped me in my career and in my life to get to this point where a group decided that this guy qualifies for the Hall of Fame, this guy ought to be in the Hall of Fame.

“And then when I was advised by Jane Forbes Clark [Hall of Fame chairman of the board] on the phone call on December the 4th at 5:13 p.m. in the hotel in Maryland, across the Potomac from Washington, D.C., that I had been elected into the Hall of Fame, and she congratulated me and said, ‘And now, forever, you will spell your name differently,’ and I asked her what she meant by that and she said at the end of your name you will write, ‘HOF 2017.’ So that’s what I feel. I’m so proud and so honored and so thrilled – I couldn’t be any more of those three qualities than I am right now.” 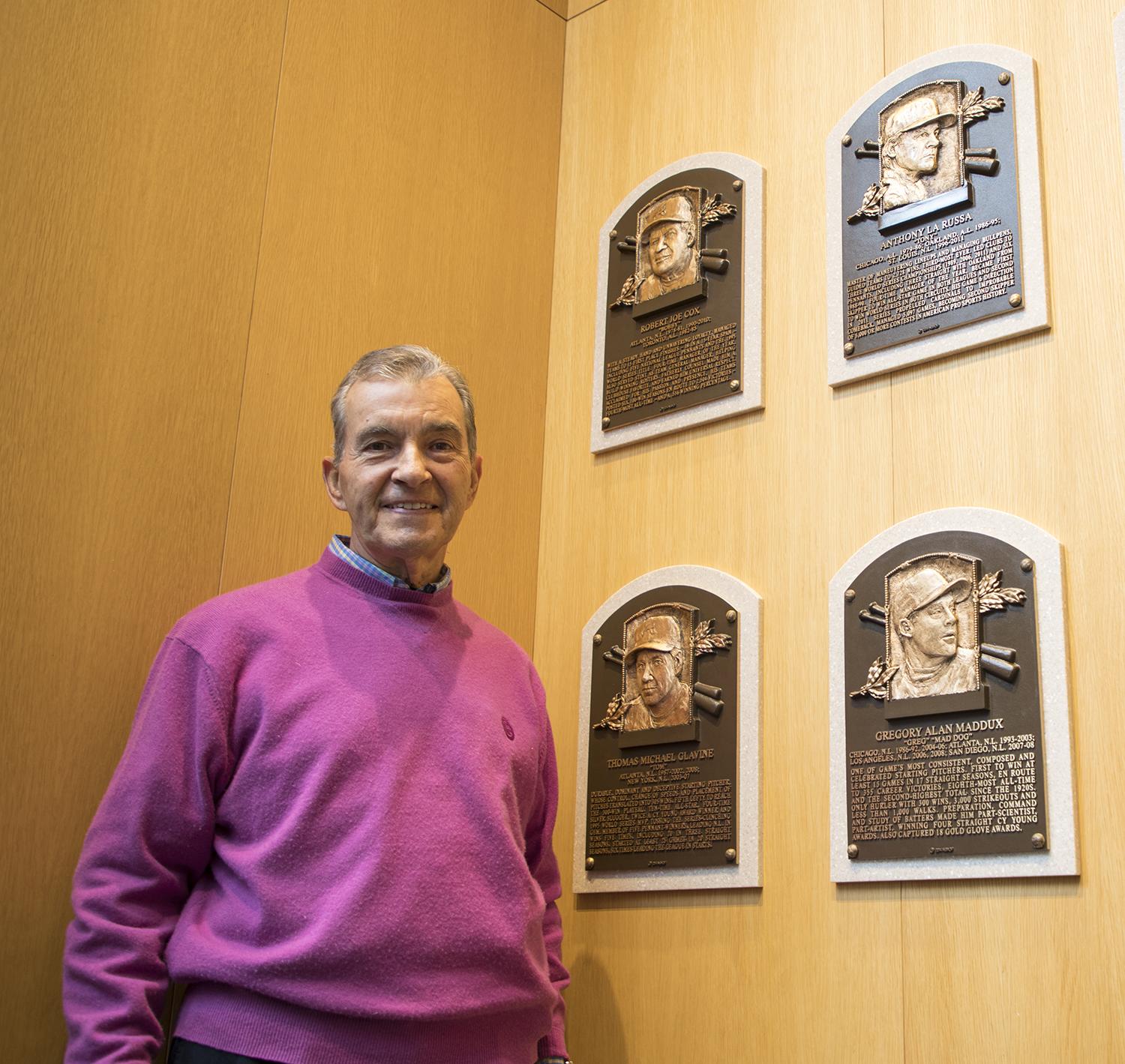 As for his induction speech, which he will be delivering in about six months, Schuerholz says he’s been writing down ideas in his free time.

“I’m now in my 52nd year as a baseball executive, 26 of those years as a general manager, and before that as an assistant general manager and player personal director, always building teams,” he added. “I have a lot of fond memories that I’m going to try and condense into a 10-minute speech presentation. I’ll do the best that I can.” 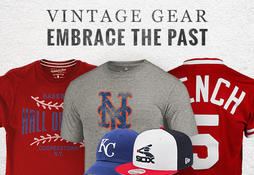 “I’ve learned by watching good people, smart people, how they work, how they prepare, how they communicate, how they lead, how they deal with people,” Schuerholz said. “And if you’re in a leadership position, which I have been in most of my life in this game, it’s about people believing in you, knowing that you trust them and you empower them and you honor them, and they’ll work harder and give you better information. Therefore, you succeed more. And that’s what happened to me.”

In 1990, Schuerholz moved to the Atlanta Braves as general manager and one year later the team won the first of 14 consecutive full-season division titles, which included a World Series crown in 1995. In his 26 years as GM of the Royals and Braves, from 1982 to 2007, his teams won 2,348 games, an average of more than 90 wins per season.

“I was fortunate to have acquired a lot players who filled the roles we needed them to fill,” Schuerholz said. “I’ve always believed, my philosophy as a general manager, that it is the strength of the total fabric of the talent of the team. Not just the accumulation of individually talented players. It’s those who would blend together best, who would work together best as a group with the manager that we had. That’s the way I tried to put teams together. The total fabric of the team is more important than an accumulation of individual players. And that’s the way I’ve always done it.

“The Fred McGriff trade (slugging first baseman acquired by the Braves in July 1993) stands out as a trade acquisition and the signing of Greg Maddux as a free agent (December 1992) stands out in my mind as one of the top free agent signings ever.” 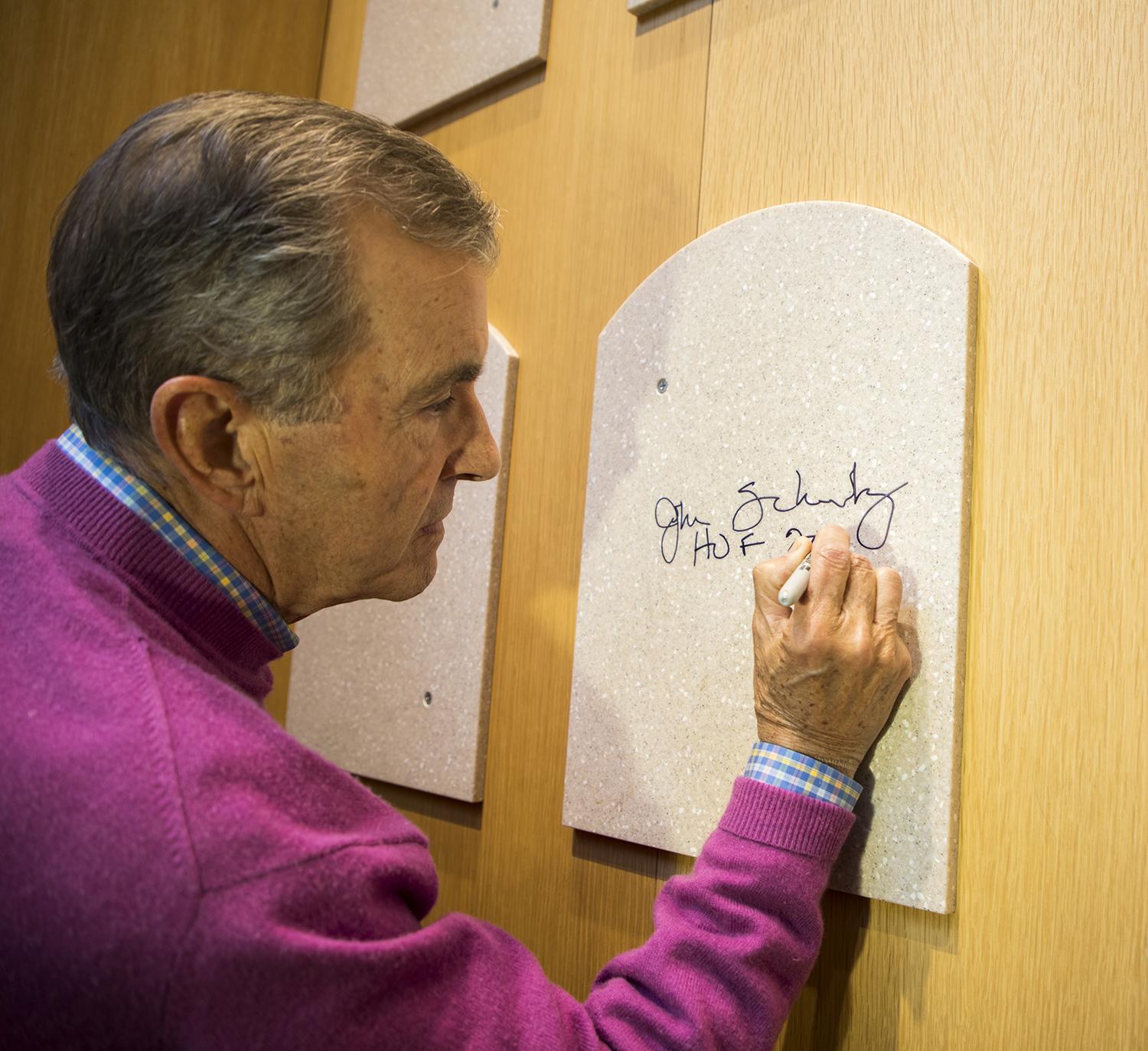 Over the last few years, a number of Braves from Schuerholz’s era have been inducted into the Hall of Fame, including manager Bobby Cox (2014) and pitchers Tom Glavine (2014), Greg Maddux (2014) and John Smoltz (2015).

“This is an organization that is filled with very, very talented people, good, capable people, who know what they’re doing,” said Schuerholz, who currently holds the title as Braves vice chairman. “So you happen to be surrounded by people of that caliber, of that ilk, of that feel, of those capacities, and who feel about the game of baseball, and who dedicate themselves to the game of baseball, who become winners and champions and Hall of Famers all. And to be able to say that I’m now joining that group of those outstanding Braves Hall of Famers, and soon we all believe. I think, that Chipper Jones (who becomes Hall of Fame eligible in 2018) might someday be considered for that kind of recognition as well, I’m honored to be a part of that group.”

During his tour of the Museum, Schuerholz often remarked on aspects of baseball history that intersected with his own long tenure in the sport, whether it be how both he and Babe Ruth were both born in Baltimore, how renowned ballpark designer Janet Marie Smith had worked on Atlanta’s Turner Field, to his relationship with Hank Aaron, a Braves legend who is a part of the team’s front office.

While looking through the Museum’s Whole New Ballgame exhibit, Schuerholz remembered the infamous 1983 Pine Tar Game in which the Royals’ George Brett was called out.

“I wrote a letter of protest to American League President Lee MacPhail,” he recalled. “George Brett was like a mad bull, a raging bull, when he was called out.”

Inside the Hank Aaron exhibit, Chasing the Dream, Schuerholz said, “Great player. Great man. My role model in life. Someone to look up to.”

A tray of World Series rings in the Autumn Glory exhibit caused Schuerholz to remark, reluctantly, “There should have been a few more after 1995.” 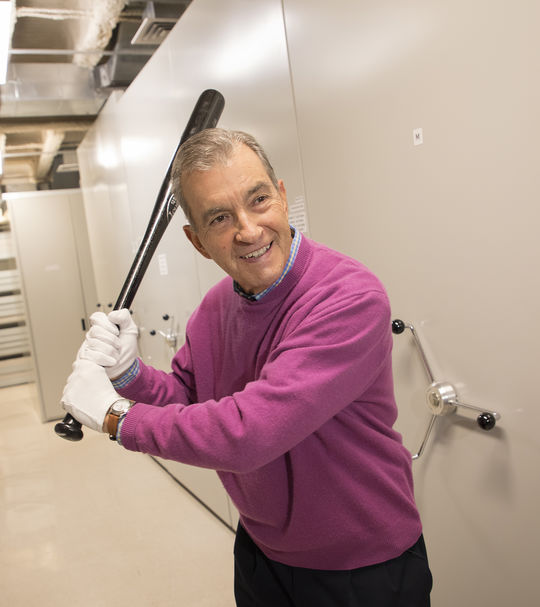 John Schuerholz practices his batting stance with the bat David Justice used to hit a go-ahead home run in Game 6 of the 1995 World Series, helping lift the Braves over the Indians. (Milo Stewart Jr. / National Baseball Hall of Fame) 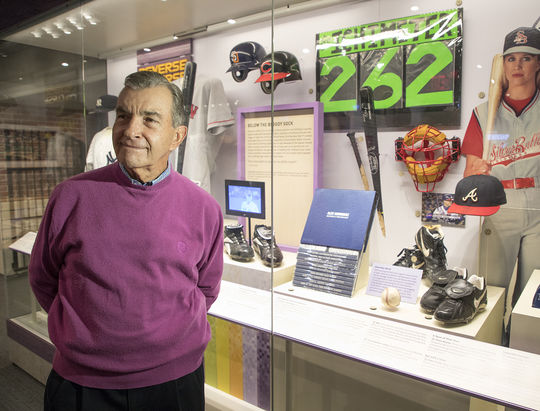 After his tour of the Museum, Schuerholz, somewhat overwhelmed, told the assembled media: “This trip here, this experience here, and going through the Hall, and going through the antiquities downstairs with the gloves on, and knowing how much I love this business and this industry and this game and this place, this great shrine that celebrates the excellence, the top level of excellence in this game, and to now know that someone believes that I belong in that grouping, I’m so honored and thrilled.” 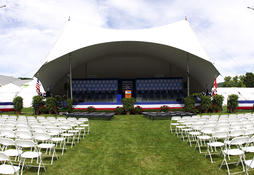 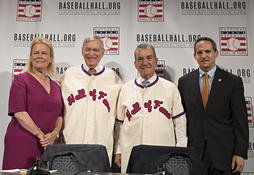 Less than 24 hours after receiving the news, Bud Selig and John Schuerholz seemed both overjoyed and overwhelmed at the prospect of having bronze likenesses of themselves in Cooperstown.