The cheers, however, resound to this day.

Danny McDevitt went the distance for the Dodgers, allowing just five hits and striking out nine to pick up his seventh win of the season.

Gil Hodges and Elmer Valo drove in runs for Brooklyn, and Gino Cimoli scored the final run on Hodges' RBI single in the third inning.

Hodges was also the final Brooklyn batter to come to the plate, striking out to end the eighth inning.

Dee Fondy grounded out to shortstop to end the game for the Pirates. 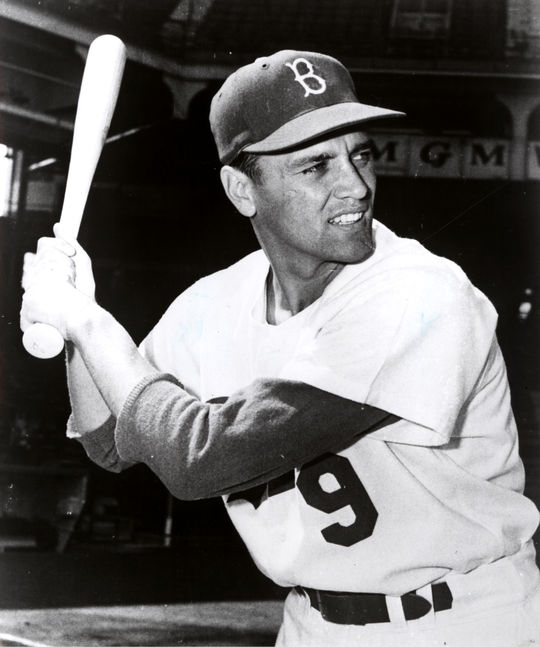 Gino Cimoli of the Dodgers scored the final run in the history of Ebbets Field on Sept. 24, 1957. (National Baseball Hall of Fame and Museum)

Within weeks of that Tuesday victory, the Dodgers had moved to Los Angeles and the New York Giants had moved to San Francisco, reducing New York's Major League tenants from three teams to one.

And though Ebbets Field is gone, its story remains at the National Baseball Hall of Fame and Museum in Cooperstown, where the ballpark's cornerstone stands as a fan favorite along the timeline of baseball history.

The Brooklyn Dodgers of the 1940s and '50s remain one of baseball's most iconic teams, having won six National League pennants and one World Series title in a 10-year stretch.

The Brooklyn side of the box score from that Sept. 24, 1957, game includes Hall of Famers Pee Wee Reese and Roy Campanella, and many of the 1957 Dodgers would go on to star for the 1959 Los Angeles Dodgers, who won the World Series that fall against the Chicago White Sox.

The Dodgers spent 45 seasons in Ebbets Field, then played from 1958-61 at the Los Angeles Coliseum before moving into Dodger Stadium in 1962. Gil Hodges (14) approaches the plate in this May 30, 1955 game between the Dodgers and the Pirates at Ebbets Field. The home of the Dodgers would host its final big league game a little more than two years later. (John C. Wagner/National Baseball Hall of Fame and Museum)