Woodrow Wilson was the president of Princeton University, governor of New Jersey, the 28th President of the United States and a big baseball fan.

A unique 1923 New York Giants season pass for the Polo Grounds once belonging to Wilson, who served as U.S. president from 1913 to 1921, was donated to the National Baseball Hall of Fame and Museum back in 1986. It will be available for viewing in Washington, D.C. as part of FanFest, a five-day celebration of the sport and local community held during the All-Star break held at the Walter E. Washington Convention Center from July 13-17.

The Baseball Hall of Fame has a major presence at the 2018 FanFest, including a micro-exhibit titled “Presidential Pastime.” Among the artifacts included, along with the Wilson pass, are a baseball signed by 10 U.S. Presidents, a presidential box seat from Washington’s Griffith Stadium, President Franklin D. Roosevelt’s 1942 “Green Light Letter” encouraging the game to continue during World War II, and the glove President Dwight D. Eisenhower wore in 1956 when he threw out the ceremonial first pitch on Opening Day at Griffith Stadium.

The distinctive sterling silver circular 1923 New York Giants season pass to the Polo Grounds given to Wilson is 1 3/8 inches in diameter with a loop on top. The convex front, with stitching to resemble a baseball, extols the Giants as reigning World Series champions of 1921 and ’22; the flat back is inscribed with former President Wilson’s name.

Wilson, who was living in Washington, D.C. in 1923 when the Giants season pass was issued, would soon pass away at the age of 67 on Feb. 3, 1924. But while in office, he continued a longstanding relationship between baseball and the U.S. presidency as a regular presence at games, including in 1915 becoming the first President to attend a World Series as well as tossing out numerous ceremonial Opening Day first pitches for the Washington Senators.

“Woodrow Wilson absorbed baseball more deeply than almost anyone in the Oval Office who preceded or succeeded him,” said Curt Smith, author of the recently released book The Presidents and the Pastime: The History of Baseball & the White House, in a recent interview. “A page from a Wilson boyhood geometry notebook, titled ‘Base Ball Ground,’ shows a hand-scribbled diagram of a baseball diamond. The future president was later Davidson College’s varsity center fielder and Princeton’s assistant manager.

“Wilson began his first term in 1913 by seeing four games in April, still the most that month for any President,” Smith added. “In his second term and afterward a series of strokes left him paralyzed, Wilson seeking refuge in a game whose inner world was never out of season.

“By arrangement with Senators owner Clark Griffith, he was driven to Griffith Stadium to see his team play, his auto entering through a special gate, then parked by the home bullpen. From there the President watched, top down; the Secret Service, helped by players, protecting him from foul balls.

“Whatever the score, he stayed to the end. Wilson’s fidelity to the sport, a pastime that returned his love, gave him something to live for. In the end, each kept the faith.” 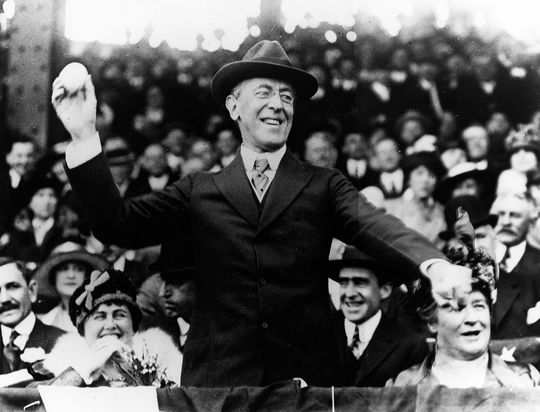 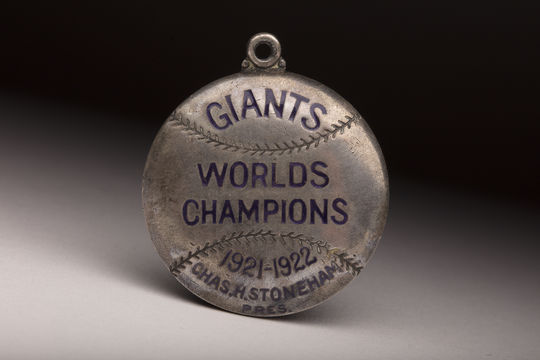 This 1923 New York Giants season pass for the Polo Grounds once belonged to Woodrow Wilson, who served as U.S. president from 1913 to 1921. (Milo Stewart Jr./National Baseball Hall of Fame and Museum)

“Presidents Harding and Wilson were real fans,” said Griffith, who at the time had witnessed Presidents attending opening games in Washington for over 25 years. “They followed baseball closely and came to the park often.”

Longtime Senators first baseman Joe Judge, who was on hand for numerous presidential first pitches during his time playing in the nation’s capital from 1915 to ’32, agreed with Griffith, stating in a 1933 interview: “Woodrow Wilson was by far the best fan. He knew a lot of us players and he used to come out to the park often. He’d run his car right on the field and we’d put a player who wasn’t in the game at each corner of the car to watch for fly balls.”

Some big leaguers even campaigned for Wilson when he was running for re-election as President in 1916, including Hans Lobert, Jake Daubert, Grover Hartley, George Burns, John McGraw and the Georgia Peach.

“Next to Hughie Jennings, manager of the Detroit team, I consider Woodrow Wilson the greatest American,” said Ty Cobb in a September 1916 interview. “My first ambition, of course, is to have the Tigers win the pennant, but next to that my most earnest desire is to see President Wilson re-elected. 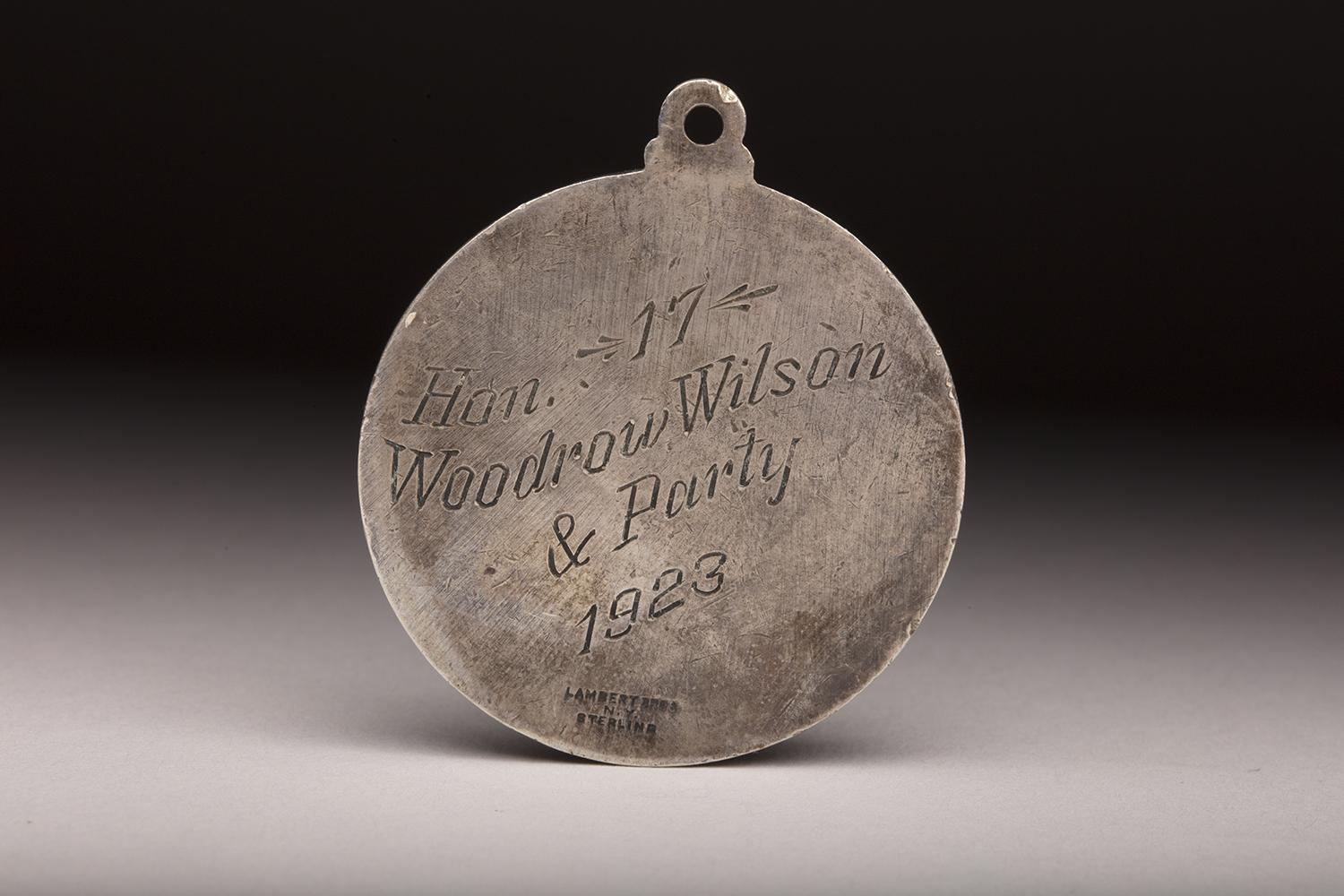 During his first run for President in 1912, a former teammate came out with a scouting report on Wilson the ballplayer.

“Woodrow Wilson was a fine baseball player, but too darn wrapped up in reading to come out for practice,” said North Carolina Gov. Robert Broadnax Glenn in June 1912. “Governor Wilson and I were college mates. We played together against rival colleges on the diamond for two years. That was at Davidson College, North Carolina. After that Wilson went to Princeton and I went back to the plow.

“Wilson was a good ballplayer, but he was too confounded lazy to make a star. When the team would be called out for practice, we’d have to go to his room and drag him away from a book. But when Wilson wanted to play he was a star. He played left field and while he had an awkward way of running, he covered a lot of ground and was the best pinch-hitter on the team. His only trouble was that he cared more for history than for Spalding’s rules.”

In addition to its place at FanFest, Wilson’s 1923 New York Giants season pass is available digitally through the Hall of Fame’s PASTIME (Public Archive System To Interact with the Museum Electronically) online collection. 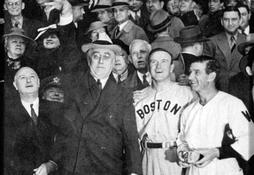 On Jan. 15, 1942, President Franklin Roosevelt wrote to MLB commissioner Kenesaw Mountain Landis to give the go-ahead for baseball to remain active during World War II. 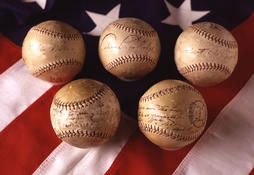 Whenever a new President enters the White House, the Hall of Fame has documented this through artifacts from the National Pastime.