What exactly makes an autograph, an autograph? Well, success is one ingredient, for sure. Name recognition helps. Other times, it is just enough to be associated with a group that someone is a fan of to make that person’s signature an autograph.

This is just such the case of the 1948 Brooklyn Dodgers signed letterhead held in the National Baseball Hall of Fame and Museum’s Library collection. This unassuming 7.25 x 10 inch piece of paper features the autographs of 27 men who played or worked for the 1948 Brooklyn Dodgers. While there are plenty of recognizable names, such as Hall of Famers Jackie Robinson, Pee Wee Reese (signed “Pee Wee” Reese), and Leo Durocher, there are some lesser-known names, including Jake Pitler (former player-turned first base coach), Harry Taylor and Don Lund.

How did this particular document come to be a part of the Hall of Fame’s collection? The donor, who was a 10-year-old boy at the time, wrote a letter to the Brooklyn Dodgers, requesting autographs from members of the team. The team delivered and the signed letterhead is what the donor received in return. 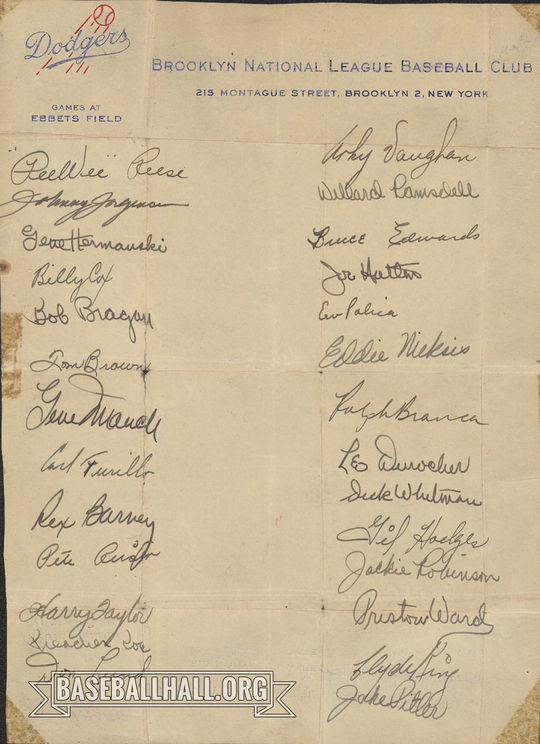 Twenty-seven members of the 1948 Brooklyn Dodgers signed this letter for a young fan who had requested autographs from the team. PASTIME (National Baseball Hall of Fame and Museum)

Years later, when the donor had grown up and started a family of his own, he came home one night to discover that the sheet of autographs was missing. He kept the sheet in a picture frame on a high shelf, most likely so that it wouldn’t be damaged. Later that evening, while eating supper with his family, the donor began his investigation into where the document had gone.

Soon enough, one of his sons confessed. He had taken it to school with him for his class’s show-and-tell day. The document was returned, unharmed, but who can really blame him for wanting to show off this sheet of autographs?

The donor ultimately decided that the document was not particularly safe in a house full of children. In 1975, after some thought and consideration, in which one of his sons believes was “to preserve the historical documents of baseball and allow this document to be available for future research, as well as fan appreciation,” he drove to Cooperstown and came to the Hall of Fame, where he offered to donate the document to the Library. It was accepted and has been preserved and cared for ever since.