Part of the SHORT STOPS series
Written by: Trevor Hayes

In October of 2010, the University of Connecticut grad and Massachusetts-based pharmacist had her photo added to the Diamond Dreams exhibit on the second floor of the National Baseball Hall of Fame and Museum. She joins visionary Camden Yards architect Janet Marie Smith, President of Business Operations for the Houston Astros Pam Gardner and others in the “In the Office” section of the exhibit. 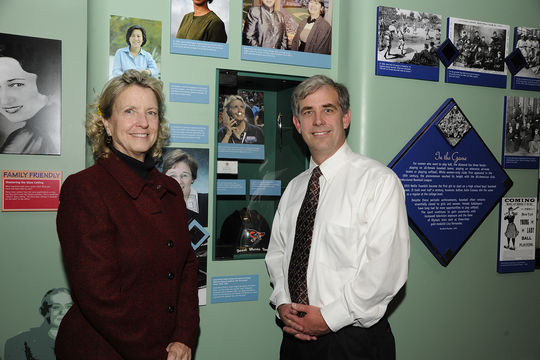 Judy Scarafile (left) poses alongside her photo in the Diamond Dreams exhibit of the Museum, with Hall of Fame curator of history & research John Odell. (Milo Stewart Jr./National Baseball Hall of Fame and Museum)

Beginning her relationship with the Cape League as an official scorer, Scarafile held the positions of publicity assistant, league publicist, secretary, deputy commissioner and VP before becoming the only female president in the league’s 127-year history.

Under her tenure as president, the league continued to grow and prosper as the nation’s top collegiate summer league. Scarafile oversaw seemingly every aspect of the Cape League’s administration, from finances to public relations. She organized the league’s Strategic Planning Committee and she became the first director of corporate development until 2014, procuring more than 50 corporate sponsors and $7 million which allowed the league to produce an annual budget of $550,000.

Drawing top-tier college prospects, using the wood bats they’d use at the next level, play is often considered to be around Single A Minor League Baseball. As evidence of the Cape League’s success, in 2006, over 1,000 alumni were playing professional baseball; in 2008, the MLB-backed league had 205 alumni either playing in the majors or on big league disabled lists.