Mickey Owen was an All-Star catcher and regarded as one of the game’s best backstops. But an unfortunate event on the game’s biggest stage 75 years ago has long overshadowed his career.

In a season that saw Ted Williams bat .406 and Joe DiMaggio hit safely in 56 straight games, Owen will be remembered by many as the “goat” of the 1941 World Series.

In his first year as the starting catcher for the Brooklyn Dodgers, Owen helped his team to its first National League pennant since 1920. Owen and his teammates would be facing the formidable New York Yankees, a squad which won their pennant by 17 games, led by the powerful lineup that included DiMaggio, Bill Dickey, Charlie Keller, Joe Gordon and Tommy Henrich.

Appearing in the Fall Classic was a familiar spot for the Yankees of this era, having won four consecutive world championships from 1936 to 1939, while the Dodgers franchise had yet to capture its first World Series crown. But Brooklyn’s prospects looked promising in this title matchup that ultimately foreshadowed a longtime postseason rivalry with the Bronx Bombers. 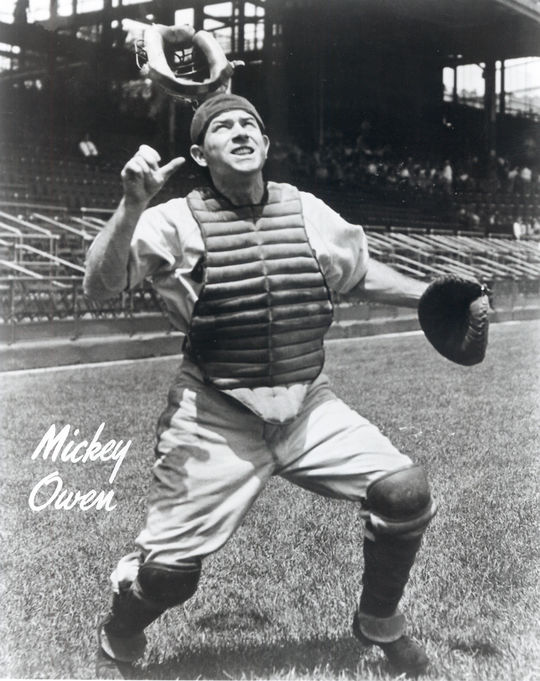 In his first year as the starting catcher for the Brooklyn Dodgers, Owen helped his team to its first National League pennant since 1920. (National Baseball Hall of Fame)

The first three games of the 1941 World Series were all low-scoring, one-run affairs, the Yankees winning the first and third games, 3-2 and 2-1, respectively, while Brooklyn was the victor in Game 2 by a 3-2 count.

The Series’ fourth game took place at in front of 33,813 excited fans at Brooklyn’s Ebbets Field on the afternoon of Sunday, Oct. 5. Owen’s mistake, though certainly not career-defining, took place in the ninth inning.

Brooklyn, only one strike away from evening the World Series at two games apiece, had veteran righty relief pitcher Hugh Casey on the mound facing Henrich, the Yankees’ left-handed hitting right fielder. In this top of the ninth dramatic faceoff, the Dodgers led 4-3 with no Yankees runners on base and a full count on the batter. 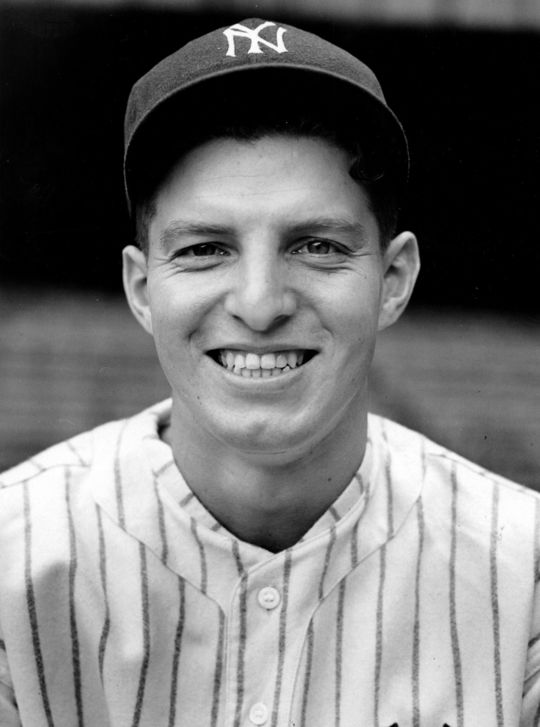 After Mickey Owen's error behind the plate, Tommy Henrich later said of the incident: “That was a tough break for Mickey to get. I bet he feels like a nickel’s worth of dog meat.” (National Baseball Hall of Fame)

Then Casey delivered what was described as a “jaw-dropping curveball” that Henrich took a swing at but missed by a foot. Home plate umpire Larry Goetz raised his arm to signal that it was a strikeout, but the game was not over. As policeman came onto the field in order to protect it from fans, thinking the game was over in Brooklyn’s favor, the baseball thrown by Casey was heading to the backstop, having kicked off Owen’s mitt. Henrich, realizing what had happened, ran safely to first base without Owen making a throw.

Still only one out away from being victorious, the wheels came off for Casey and the Dodgers in quick succession as DiMaggio followed up with a single; Keller’s fourth hit of the game, a double off the right-field wall, knocked in two runs; and a Dickey walk and a two-run double by Gordon over the left-fielder’s head made for an agonizing four-run inning for Brooklyn’s home fans to witness. 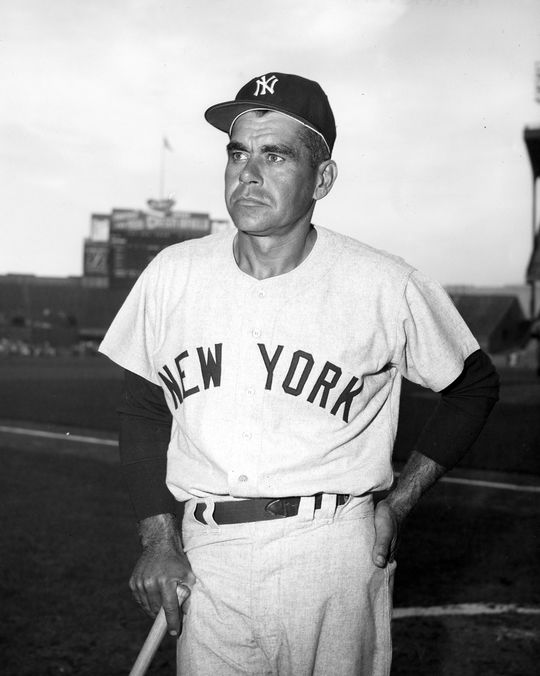 Charlie Keller's bat, which he used to hit his game-winning double in Game 4 of the 1941 World Series, is currently on display in the Museum's Autumn Glory exhibit. (National Baseball Hall of Fame)

In the bottom of the ninth, now behind 7-4, the demoralized Dodgers offered little resistance and went down in order before the stunned Ebbets Field onlookers.

The National Baseball Hall of Fame and Museum currently has in its Autumn Glory exhibit the catcher’s mask Owen was wearing and the bat used by Keller to hit his game-winning double in Game 4 of the 1941 World Series.

“I think I got my glove on that ball and I ought to be charged with an error,” said an emotionally distraught Owen – who was given an error on the play by the official scorer – minutes after the game was over. “It isn’t being the ‘goat’ that bothers me, though. That doesn’t worry me in the least. What I’m really broken up about is the other boys on our club who did so well and certainly deserved to win.

“It was all my fault. It wasn’t a strike. It was a great breaking curve that I should have had. But I guess the ball hit the side of my glove. It got away from me and by the time I got hold of it, near the corner of the Brooklyn dugout, I couldn’t have thrown anybody out at first.”

Henrich had sympathy for the catcher afterward: “That was a tough break for Mickey to get. I bet he feels like a nickel’s worth of dog meat.”

Writer John Lardner told of the game in more poetic flourishes: “I tell you, comrades, Flatbush at 4:45 Eastern Standard Time was like the layer of Dante’s Hell where the shades of the damned move mutely through a gray mist. 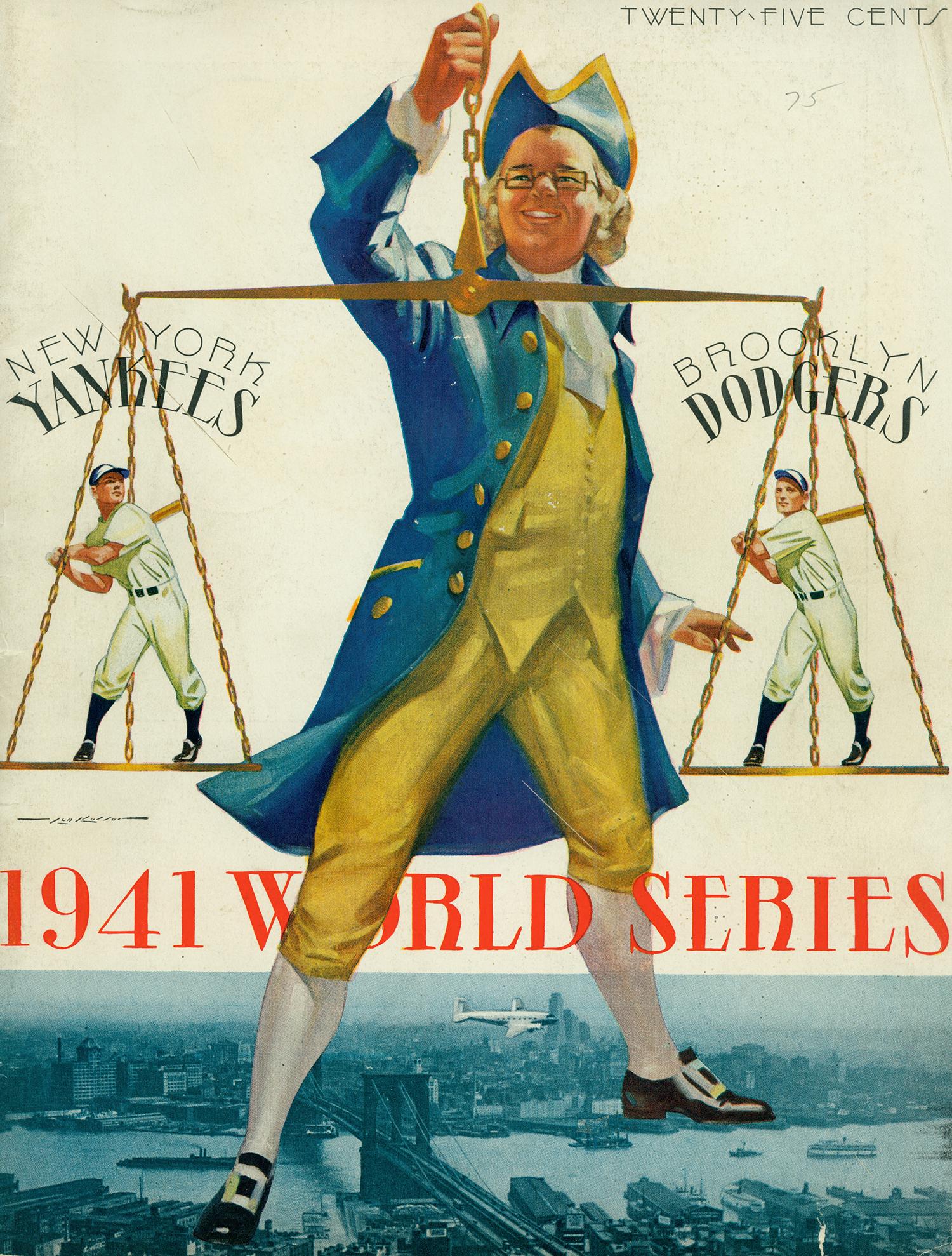 “Owen’s crime, of course, did not end the ballgame. But every Yankee blow thereafter was like the blow of a club on the head of an unconscious man. I doubt if more than a quarter of the fans could tell you exactly how those four runs in the ninth inning were scored. They were just rolling drunkenly with the punches.”

Henrich, batting third in the Yankees’ lineup this game, came into the at-bat having gone 0-for-4 on the day.

“I just took my cut and when I looked around and saw the ball heading for the backstop, I set sail for first,” Henrich said. “I’ll admit I was as surprised as anybody in the park, and for a flash I thought I was back playing on the sandlots where so often a pitcher strikes out 19 or 20 and still loses because several third strikes get away from the catcher.

“Shucks, I don’t know why I swung at it. I surely would have gotten a base on balls if I hadn’t because the count then was 3-and-2. But once I swung I started to run like hell. I ain’t left-handed for nothing, you know, and it was the only thing for me to do.”

Dodgers manager Leo Durocher was only 36 years old, a veteran player who even saw action in 18 games for the team that year.

“Mickey will catch 8,000 balls just like that one before he is through as a big league catcher, so what else can you say except that (Whit) Wyatt will go for us tomorrow,” Durocher said. “Today was just one of those things. You can’t blame anyone for it. It just happened.”

The game’s tough luck loser was Casey, who was charged with his second defeat in as many days. He had come on in relief with two outs in the top of the fifth inning in Game 4.

“I had Henrich 3-and-2 on the count, so I figured I’d r’ar back and give him the curve. It broke too much. Then when Keller came up I gave him the same pitch and he caught hold of it for two bases.”

Keller’s double knocked in two runs, the second of which proved to be the winning run. Dodgers right fielder Dixie Walker wasn’t convinced the best team had won.
“I tell you, those fellows have got all the luck on their side. Never saw a team get so many breaks as they have,” Walker said. “That ball Charlie Keller hit, for instance, instead of coming down off the screen, as such balls usually do, hit the top of the concrete shelf and bounced away up again.” The crowd at Ebbets Field looked on in dismay as Mickey Owen missed Hugh Casey's pitch, and their beloved Dodgers went down, 7-4, to the Yankees. (National Baseball Hall of Fame)

Yankees manager Joe McCarthy chalked about the heart-breaking Dodgers loss to the vagaries of the game.

“That just goes to prove what has been said for a long time, the game isn’t over until the last man is out,” McCarthy said. “It was the break of the game. They get ‘em and we get ‘em. They may come in the first inning or the third. Or they may come as this one did, right at the finish. But at that, it’s not the break itself that counts, but what follows. We just followed that one through. That’s all. It was a bad pitch, that 3-and-2 pitch to Henrich, and it might have been the fourth ball anyway. It wasn’t a ball when Tommy went around with his swing. But that’s baseball.”

When Owen, a four-time All-Star with the Dodgers who would have a 13-year big league career, passed away at the age of 89 in July 2005, obituaries linked him with Bill Buckner, Fred Merkle and Ralph Branca as great ballplayers whose outstanding careers were tarnished by one incident on the ballfield.

Decades after the notorious error, Owen lent more perspective to the event: ''I would've been completely forgotten if I hadn't missed that pitch.”