Babe Ruth, who ended his career with a then-record 15 World Series home runs, connected for his first Fall Classic round-tripper 100 years ago. That historic moment is preserved forever in Cooperstown thanks to a filled out scorecard from that 1921 Yankees vs. Giants game.

In 1921, the famous New York Yankees slugger was in the midst of arguably the greatest offensive season any ballplayer has ever enjoyed. The 26-year-old left-fielder, in only his second season with the Bronx Bombers, walloped 59 home runs – setting a new major league single-season record for the third consecutive year.

Calling the Polo Grounds home – the American League team from New York was a tenant at the New York Giants’ ballpark, with Yankee Stadium not opening until 1923 – the lefty swinging Ruth also led big league baseball with 168 RBI, 177 runs scored, 145 walks, a .512 OBP, and a .846 slugging percentage.

While Ruth’s impressive .378 batting average placed him third in the Junior Circuit, his 457 total bases and 119 extra base hits in 1921 are still MLB records.

By the time autumn came around, the Miller Huggins-led Yankees (98-55) were set to meet the Giants (94-59) in the World Series – the first of three consecutive Fall Classic matchups between the Big Apple rivals. Ultimately, the Giants, led by Hall of Fame skipper John McGraw, would prevail, five games to three, in the finale of the best-of-nine World Series format.

In “The Babe Ruth Story,” Ruth’s 1948 autobiography written with Bob Considine, the Babe recalled the disappointment and his self-perceived culpability in the Yankees ultimate defeat.

“After our grand start in the 1921 World Series, winning two shutout games by 3-0 scores – pitched by Carl Mays and Waite Hoyt – we thought we were in. We even scored four runs in the third game before the Giants scored their first run of the Series. But after getting away to a start like that we finally finished on the wrong end, losing five games out of eight.

“It still burns me up, for I accidentally played a part in the loss. I developed an abscess on my left elbow a few days before the Series. I played in the first five games under difficulties, and even though I hit .313, knocked out my first World Series home run, and batted in four runs, I should have done more. I had to sit on the bench for the sixth, seventh and eighth games, though I made one pinch-hitting appearance in the last contest.” 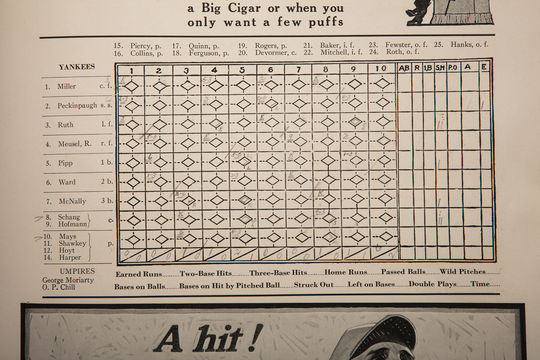 In Game 4 of the 1921 World Series, Babe Ruth went 2-for-4 with a solo homer in the bottom of the ninth, though the Yankees fell to the Giants 4-2. (Milo Stewart Jr./National Baseball Hall of Fame and Museum)

After appearing – mainly as a pitcher – in the 1915, 1916 and 1918 World Series as a member of the Boston Red Sox, Ruth finally connected for his first circuit clout in the fourth game of the 1921 Fall Classic. Taking place on Oct. 9 – following a rainout the previous day – the Sunday affair, set for a 2 p.m. start, attracted a crowd of 36,372 to the Polo Grounds.

In what was technically a home game for the Yankees, Ruth, batting third and starting in left field, went 2-for-4 with a fourth-inning single and his first World Series homer off Giants starter Phil Douglas – as well as the first Series homer hit up to that point – in the bottom of the ninth in the 4-2 loss.

“One strike had been called on the slugger when he finally connected,” wrote The New York Times. “The ball shot on a fairly high arch toward right field, leaped through the opening between the grandstand and bleachers and disappeared on a long trip to distant regions. The demonstration that followed was tremendous. The crowd stood on its feet and strained vocal chords to the very limit. Yankee rooters found a chance to cheer over something. Bits of white paper and programs were flung in a shower to the field, and out in the bleachers Ruth’s particular buddies seemed to be having trouble restraining themselves from jumping down to the field in joy.” 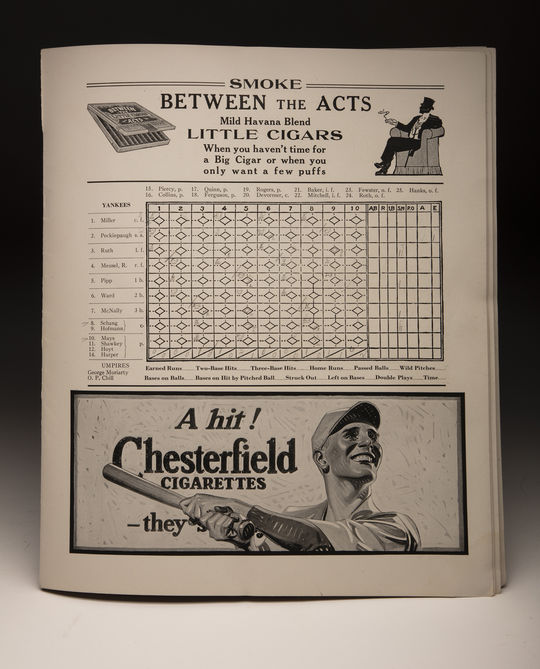 The Giants won Game 4 of the 1921 Fall Classic to even the nine-game series with the Yankees at two wins each. (Milo Stewart Jr./National Baseball Hall of Fame and Museum)

Despite the Yankees’ loss, newspaper headlines the next day relished in the Sultan of Swat’s otherworldly power: “Ruth’s Homer No Help to Hugmen”; “Ruth Cracks Out Home Run But Giants Win Game”; “Ruth Makes a Homer but Giants Win Fourth of Series.”

After the game, Ruth told reporters in the clubhouse: “I have realized one of my great ambitions – to make a home run in the world’s series, but I’m sorry it didn’t come with men on the bases. It might have meant the winning of the game.”

According to reports before Game 4, Ruth, due to his infected left elbow, had his heavily bandaged and painful arm in a sling and was not scheduled to play. Word around the press box had it that Chick Fewster would be in left field. Thirty minutes before game time the lineup was given out with Ruth missing, but 20 minutes later Ruth trotted out onto the field.

“But infected elbows mean nothing in the career of this ballplayer. The king was not yet dead, and very dramatically did he stage his entrance on the field of action,” reported The New York Times. “After the Yankees had practiced their fielding for several minutes and the fans had given up hope, Ruth hopped out of the Yankee bench, put on his glove and strolled magnificently to his post in left field while the multitude gave him great applause.”

The previous day, Dr. George D. Stewart, lanced Ruth’s infected left arm with a four-inch incision. After Game 4, Dr. King, team physician for the Yankees, said there were no ill effects from playing. Babe Ruth played in 10 World Series throughout his career, batting .326 with 33 RBI and 15 homers. (National Baseball Hall of Fame and Museum)

“The arm improved wonderfully over Saturday night,” said Dr. King, “and that was the reason we permitted the Babe to play today. I advised him to rest a bit, but he was so anxious to be in the lineup that there was no use trying to stop him.”

Ruth, in his syndicated column after Game 4, wrote: “When I got to the clubhouse the boys were on the field, and I took one look at the monster crowd, perhaps the only Sunday game of the series. They wanted to see the Yankees lineup at its maximum strength and I suppose many hoped to see me hit a home run. 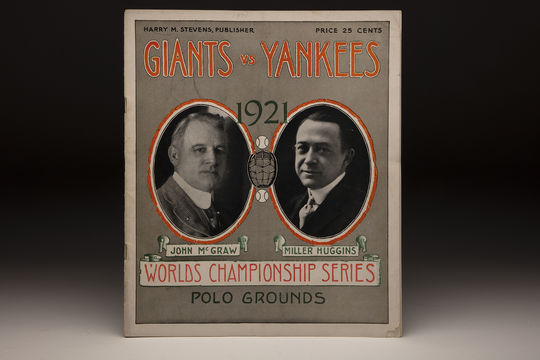 This scorecard was used during Game 4 of the 1921 World Series, when Babe Ruth slugged his first World Series home run. (Milo Stewart Jr./National Baseball Hall of Fame and Museum)

“Listening to my arguments not to disappoint one of the biggest crowds of the week, the doctor did not sanction, but did not forbid my playing. So I played, and expect to play to the finish. Throwing bothers me a lot more than swinging the bat, but a couple of more homers will even up for any wild ones I may heave from deep left field.”

Shortstop Roger Peckinpaugh, the captain of the Yankees, had only praise for Ruth after his Game 4 performance in a self-penned newspaper piece.

“What a remarkable fellow he is. In defeat a home run is just a hit to him and nothing more. In victory he thrills over his great drives,” Peckinpaugh wrote. “I’m sorry for him, and I’m hoping his next homer wins a game for us for the pleasure it will give to him, to us and to our rooters. He entered today’s game in worse shape than any player who ever took part in a world’s series, and he went in because he wouldn’t stay out – because he couldn’t be kept out.

“The big fellow has a heart as large as his great body, and they don’t come any gamer. His spirit is contagious and tomorrow we are going to do our darndest to express that spirit in terms of base hits and victory.”

Even “Mugsy” McGraw was impressed with the Colossus of Clout’s performance under trying conditions.

“I would like to take this occasion to express my respect for Babe Ruth. He certainly has proven his gameness,” McGraw said. “I know that his arm must have been very painful, but he stuck it out. He did not want to weaken his team and refused to sit on the bench. I am glad that he was able to play, for, as I said yesterday, I would rather the Giants beat the Yankees when (Yankees manager Miller) Huggins has his full strength in the field than to win from them when they are weakened in any way.”

In 1967, William McCabe of Dayton, Ohio, donated to the National Baseball Hall of Fame and Museum a 1921 World Series program. While the cover is dominated by oval images of McGraw and Huggins and a sale price of 25 cents, the interior features scorecard pages filled out in pencil from Game 4.

Ruth – one of five in the Baseball Hall of Fame’s inaugural Class of 1936 – would end his 22-season big league career in 1935 with 15 World Series home runs, a record that remained until fellow Yankees legend Mickey Mantle swatted his final three – numbers 16, 17 and 18 – in the 1964 Fall Classic.