After 65 Years, A Joltin' Discovery at the Hall of Fame

Part of the POP UPS series
Written by: Tom Shieber

April 18th marks the anniversary of a special event in the history of the New York Yankees and the National Baseball Hall of Fame and Museum. On that day in 1952, the Yankees retired Joe DiMaggio’s famed No. 5 jersey in an on-field ceremony prior to the club’s home opener. The event marked just the third time the Yankees had retired a player’s uniform number, as Lou Gehrig and Babe Ruth had been similarly honored in 1940 and 1948, respectively.

As part of the festivities, DiMaggio donated the jersey, a pinstriped model from the previous season, to Rowan Spraker, Vice President of the Baseball Hall of Fame. Thrilled with the donation, Spraker returned to Cooperstown with the historic artifact and soon DiMaggio’s jersey hung in the Museum, just feet away from those of Lou Gehrig (number 4) and Babe Ruth (number 3). Joltin’ Joe’s jersey is currently a featured artifact in the “We Are Baseball” nationwide traveling exhibit.

Recent research has revealed a surprising story about the jersey that once belonged to the Yankee Clipper. In 1951, DiMaggio had a cameo role in the movie “Angels in the Outfield.” In short, the film tells the tale of the remarkable turnaround of the Pittsburgh Pirates and their gruff manager, Aloysius “Guffy” McGovern, thanks to the prayers of a young girl and the help of angels at the ballpark. About 50 minutes into the film, DiMaggio is seen with his back to the camera, tossing a baseball with his teammates on the field at Yankee Stadium. In response to a question from an off-screen narrator, Joe turns around and quips, “If McGovern needs any extra angels, we'd be glad to give him a couple of ours.”

By meticulously comparing the retired number jersey with that worn by DiMaggio in the movie, we have been able to determine that the shirts are one and the same. The positions of various features of the Yankees jersey in relation to the background pinstripes shows an exact match between the jersey in the movie and that in the Hall of Fame’s collection. DiMaggio’s famed No. 5 on the back, the Yankees celebrated interlocking “NY” logo on the front, and the special patch commemorating the American League’s 50th anniversary on the left sleeve: Each is placed in the same location. Additionally, the pattern of pinstripes that forms at the shoulder seams on the retired number jersey is identical to that seen in the movie. 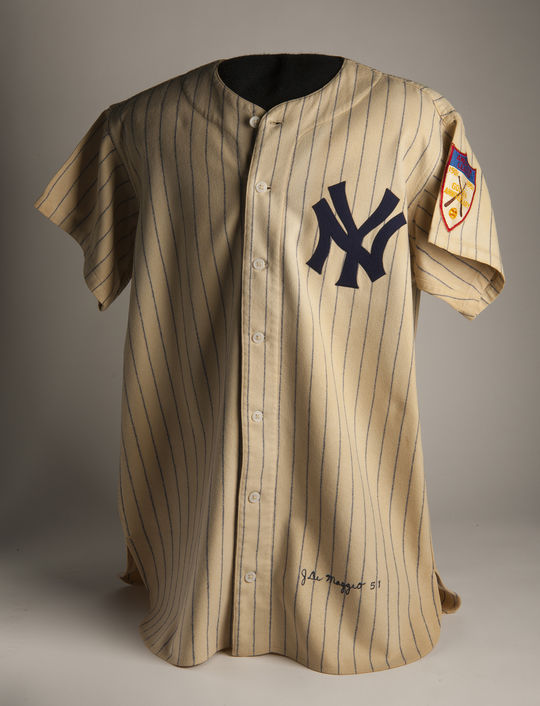 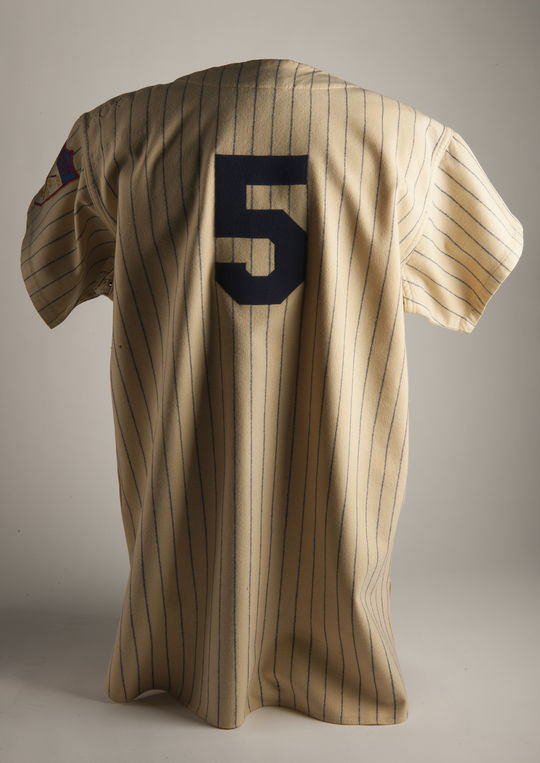 After comparing this Joe DiMaggio jersey with the jersey he wore during his cameo in the movie Angels In The Outfield, Hall of Fame researchers determined that they were one and the same. (Milo Stewart Jr. / National Baseball Hall of Fame and Museum)

Coincidentally, research conducted in Cooperstown in 2012 resulted in a similar discovery with a different Yankees jersey. In that instance, stills from the 1942 movie “The Pride of the Yankees” showing Babe Ruth in uniform were compared to Ruth’s physical retired No. 3 jersey, donated to the Hall of Fame in 1948 and made famous in Nat Fein’s Pulitzer Prize-winning photograph. Using the same technique of pinstripe matching and positioning, it was determined that Ruth’s retired number jersey was the very one that the Bambino wore during his acting stint in the movie. 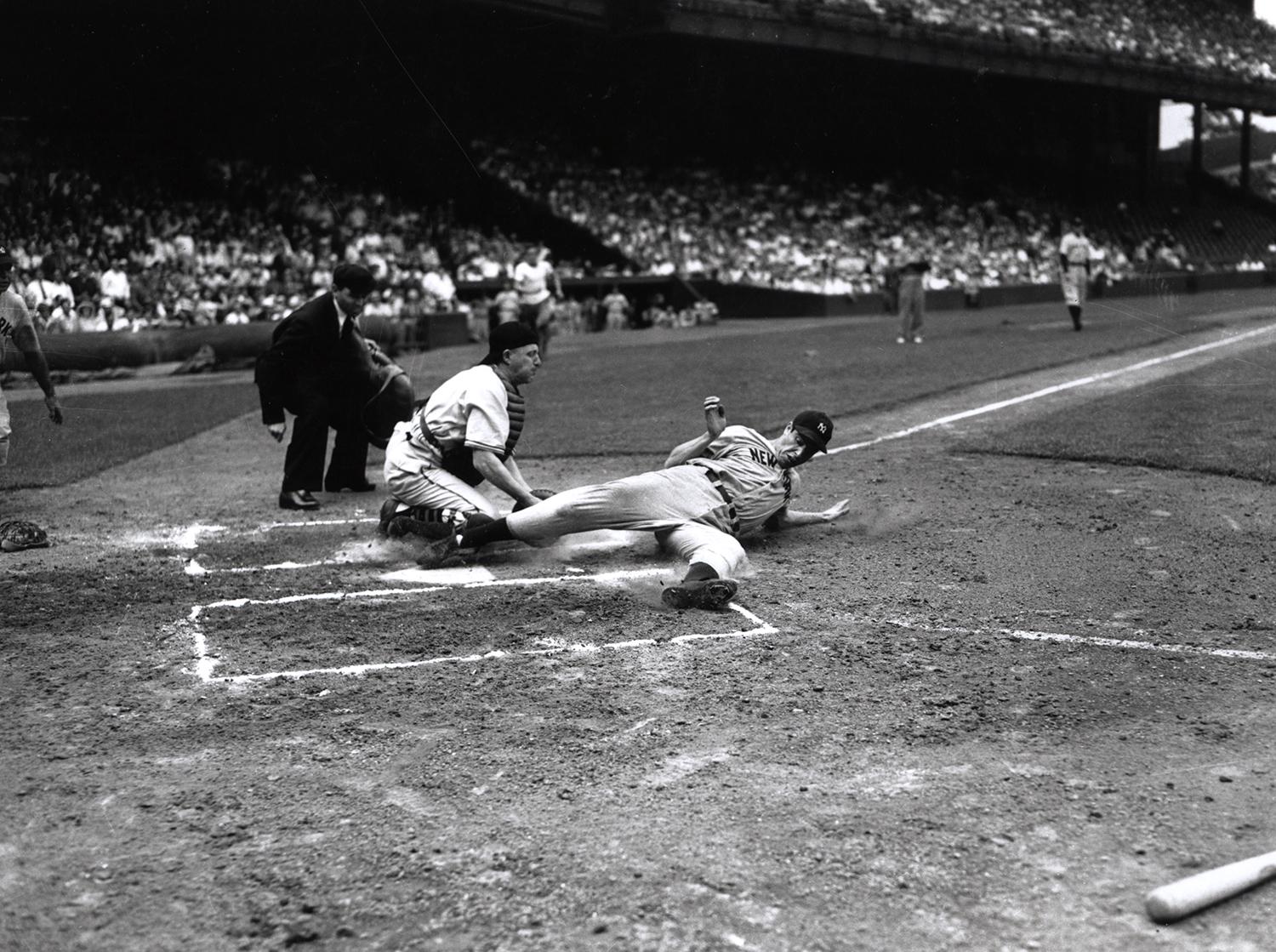 Joe DiMaggio played his entire baseball career with the New York Yankees, playing from 1936-42 and then 1946-51, serving three years in the military from 1943-45 during World War II. (National Baseball Hall of Fame and Museum)

The Hall of Fame has an ongoing commitment to researching the artifacts in its vast holdings, even items that have been in the Museum’s collections for decades. So, while the events of history may not change, the stories behind these historic artifacts are alive and well ... and are being unearthed every day in Cooperstown. 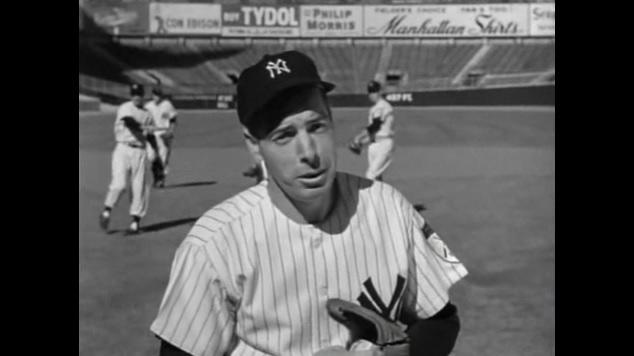 Joe DiMaggio - Angels in the Outfield 1:8