When Major League Baseball came west in 1958, Lon Simmons became the voice of the first generation of San Francisco Giants’ fans, and later bridged the gap to another.

Simmons’ voice has been silenced, but his legacy remains forever with the Giants’ faithful who grew to love their team through Simmons’ call of the game.

“Lon (was) the tie-in to what a younger fan’s mom and dad listened to, maybe even their grandparents,” said former broadcaster partner Duane Kuiper at the time of Simmons’ retirement. “Those guys don’t come along all the time.”

Both July 19, 1923, Simmons began his radio career in Elko, Nev., after an injury-shortened career as a right-handed pitcher in the minor leagues. He later worked in Marysville, Calif.

After a short time with the Fresno Sun Sox of the California League, Simmons moved to San Francisco in 1957 to broadcast National Football League games for the San Francisco 49ers.

When the Giants moved from New York to San Francisco in 1958, the only broadcaster who came along with the team was Russ Hodges. Simmons was quickly hired to team with Hodges – a partnership that lasted until 1973 when Simmons retired following the death of his first wife.

“Lon is San Francisco to the core,” once wrote Leonard Koppett, who won the Baseball Writers’ Association of America’s J.G. Taylor Spink Award for meritorious contributions to baseball writing in 1992. “He was always completely in tune with the community he was serving.”

Simmons broadcast the pennant-winning Giants team of 1962 and A's teams which reached the World Series from 1988 to 1990. He recalled his biggest baseball thrills as calling the 600th home run of Willie Mays and the dramatic home run that marked the return of Willie McCovey to San Francisco in 1977.

For those and many other home runs, Simmons gave his trademark call of “Tell it goodbye!”

“Sitting next to him,” said Kuiper, “was a treat.” 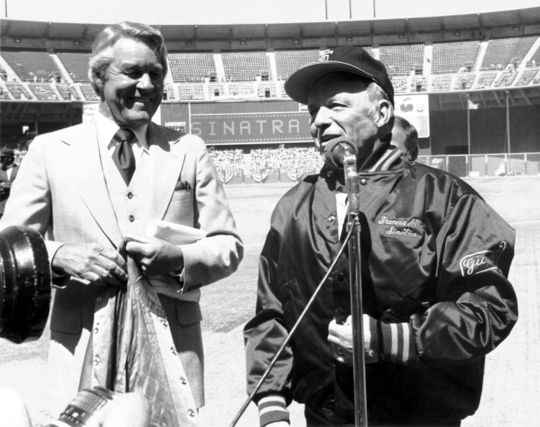