Alex Rodriguez Donates Bat Used for His 2,000th RBI to Hall of Fame

(COOPERSTOWN, NY) – The National Baseball Hall of Fame and Museum has received a donation from New York Yankees designated hitter Alex Rodriguez of the bat he used to record his 2,000th career RBI on Saturday, June 13.

The bat will soon arrive in Cooperstown and will be accessioned into the Museum’s collection. Within a few weeks, the bat will be on display in the Museum’s Today’s Game exhibit.

“The Baseball Hall of Fame is the definitive repository for the game’s history,” said Jeff Idelson, President of the National Baseball Hall of Fame and Museum. “As records, achievements and compelling stories unfold on the field, we recount them in Cooperstown through the generosity of players, teams and fans who generously donate artifacts associated with those milestones to the Museum. We extend our gratitude to Alex for donating the bat he used to record his 2,000th RBI to the Museum.”

Rodriguez’s 2,000th and 2,001st career RBI came on the same swing when he homered against the Orioles’ Bud Norris in the sixth inning on Saturday at Oriole Park at Camden Yards, driving in teammate Chase Headley ahead of him. Rodriguez became just the fourth player to reach the 2,000-RBI plateau, joining Henry Aaron (2,297), Babe Ruth (2,214) and Cap Anson (2,075; statistics courtesy of baseball-reference.com).

- A bat from his 2002 season with the Texas Rangers 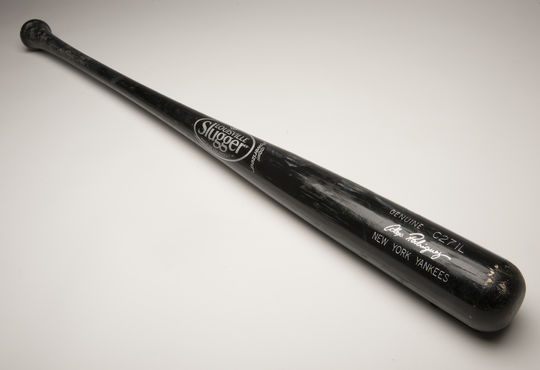 Alex Rodriguez used this bat to collect the 2,000th and 2,001st runs batted in of his career in a game against the Baltimore Orioles on June 13, 2015. (Milo Stewart, Jr. / National Baseball Hall of Fame)