In 2014, the Kansas City Royals finished one game short of their ultimate goal. This fall, the Royals made sure the crown came back to Kansas City.

The Royals captured their second-ever World Series title and first in 30 seasons after a pulse-pounding five-game World Series. Today, artifacts telling the story of the Royals’ remarkable run will arrive in Cooperstown to take a permanent place at the National Baseball Hall of Fame and Museum.

Artifacts donated by the Royals following their 7-2 win over the Mets on Sunday night at Citi Field in New York City include:

• Jersey worn by Royals first baseman Eric Hosmer in Game 5, which featured his daring dash home with the tying run in the ninth inning

• Road cap worn by Royals closer Wade Davis, who struck out eight batters in four innings of work and notched the Series’ only save

• Bat used by Royals third baseman Mike Moustakas, who hit .304 in the Series and drove in three runs

• Bat used by Royals shortstop Alcides Escobar, who scored four runs and drove in four more in the Series

These and other artifacts, which will be announced in the coming weeks, from the 2015 Postseason will be featured in the Autumn Glory exhibit, which will be on exhibit through the 2016 Postseason and is scheduled to open in late November. 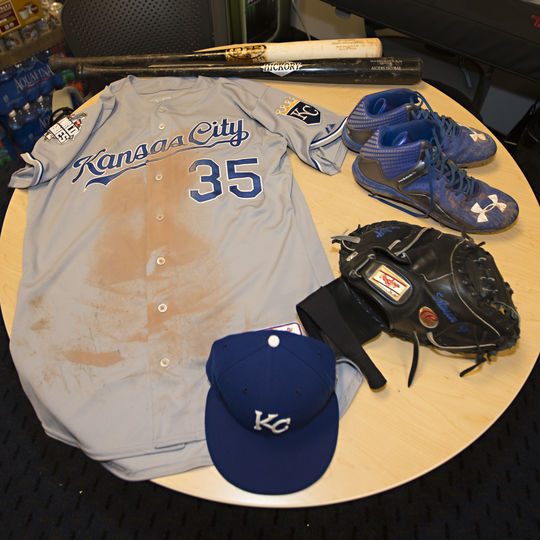 Game-used artifacts from the 2015 World Series champion Kansas City Royals will be on display in the Autumn Glory exhibit on the Museum's third floor. The new exhibit is scheduled to open in late November. (Jean Fruth / National Baseball Hall of Fame)