Part of the BASEBALL HISTORY series
Written by: Neil Lanctot

It was a word Roy Campanella often heard as he walked the streets of his Nicetown neighborhood in North Philadelphia as a boy in the 1930s. At times, the taunt goaded him into fistfights, where the chubby yet powerfully built Campy usually succeeded in silencing his loudmouthed tormentor, at least temporarily.

But fighting did not answer the question that increasingly gnawed at him. If he was, as the kids teased, a "half-breed," why was that such a bad thing? One day, he finally mustered up the courage to ask his mother.

"Yes, your daddy's white and I'm colored, and it's nothing to be ashamed of," Ida Campanella explained. "You're just as good as anybody else, and don't you ever forget it."

Campy never forgot his mother's words. If his biracial background made others uncomfortable, so be it. As he grew older, he never hid his joint Italian and African-American heritage and often boasted of his parents’ long and happy marriage. But the difficulties he faced as a mixed-race child in a less tolerant Depression-era America permanently soured him on the desirability of interracial relationships.

"Not a very good idea," he once told a reporter. "Too many problems."

The "problems" Campanella faced were innumerable. The racial arithmetic of his time dictated that one Black parent made Roy "colored" and subject to the cruel realities of Jim Crow, depressingly prevalent even in a northern city like Philadelphia. As a youngster, he was openly barred from local boys clubs, swimming pools and even some movie theaters.

Although some might look back bitterly on such degradation, Campy never dwelled on the racism he encountered as a youth. "Grin and bear it" was his philosophy.

"It is practically impossible," a reporter once remarked, "to get Campy to admit that any phase of his life was especially difficult or unpleasant." 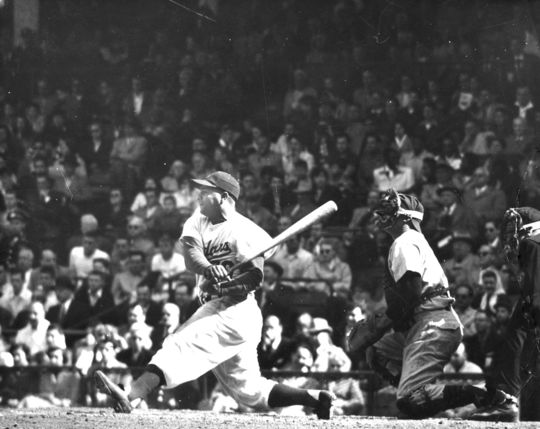 Baseball allowed Campy to escape the realities of his second-class citizenship. From an early age, he not only fell in love with the game but proved to be almost freakishly gifted. At 13, he was already catching for the Nicetown Giants, a local Black sandlot team featuring boys several years his senior. Two years later, the semipro Bacharach Giants came calling, offering Roy $25 to make a couple of upcoming weekend trips.

At 15, Campy was already a professional, but his stint with the Bacharach Giants would last less than two weeks. Plagued by injuries to their catching corps, the Washington Elite Giants of the Negro National League needed a backstop immediately. Their manager and regular catcher, future Hall of Famer Biz Mackey, had heard raves about Campanella and invited him to join the Elite Giants in June 1937.

Life in the Negro leagues, Campy soon discovered, bore little resemblance to the major leagues. Brutal travel by a beat-up old bus was the norm, the pay was pathetic in most years, and the lodging in southern locales segregated or nonexistent. On the field, Roy became accustomed to a steady diet of beanballs ("They'd fire at you like a duck," he once recalled), vicious collisions at home plate, and racial epithets hurled by fans at white venues. Still, he never once complained about the less-than-sterling conditions or the racism that forced him into Black baseball in the first place.

As a Black man with a ninth-grade education, he considered himself extremely fortunate to be making a decent living playing the game he loved so much.

After eight seasons of hard knocks in the Negro leagues, Campy knew he could play major league baseball, if only given the chance. The Pittsburgh Pirates had already toyed with the notion of offering him a tryout in 1942 before owner Bill Benswanger backed out, an experience which left Campy understandably cynical. When Branch Rickey approached him about joining the Brooklyn Dodger organization in the fall of 1945, Campy was dubious until the subsequent signing of Jackie Robinson confirmed that the offer was for real. 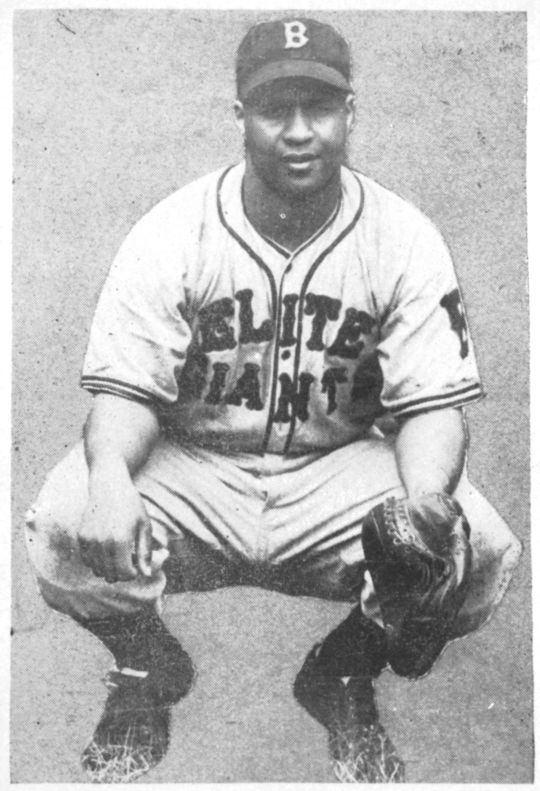 "It was just as bad as [Jackie] Robinson. He took all that 'n' stuff... It was hard to sit on the bench and hear the crap coming out of those guys."

The challenges ahead were considerable, far greater than those he faced as a 15-year-old trying to break into the Negro Leagues. In his two seasons in the minor leagues in 1946 and 1947, he contended with dirt tossed in his face, a bigoted opposing manager who promised to run Campy and Don Newcombe "out of the league in a week’s time," and hostile players who peppered him with a nonstop volley of venomous racial insults. "It was just as bad as Robinson," recalled his teammate Butch Woyt. "He took all that 'n' stuff... It was hard to sit on the bench and hear the crap coming out of those guys."

Although some Black players in the early years of the "Great Experiment" proved unable to adapt to such an environment, Campy's game continued to improve. In 1948, one year after Robinson's Brooklyn debut, the Dodgers promoted Roy to the majors and eventually made him their starting catcher. Not surprisingly, the transition was anything but smooth.

He was beaned, probably intentionally, on his first major league pitch; and some Dodgers still openly recoiled at the presence of Black players.

But Campy’s determination to succeed never flagged. And with each season, his roly-poly build, lively personality, ready wit and considerable personal charm won over almost everyone. What also won them over was his undeniable ability.

In his ten seasons with the Dodgers, he racked up three Most Valuable Player awards and nailed a phenomenal 57.7 percent of runners attempting to steal. Perhaps most remarkable was his uncanny durability and resilience in the face of ongoing hand injuries, beanings, racial insults and Jim Crow treatment during the Dodgers' excursions down south.

Campanella, one admiring sportswriter once observed, seemed almost "indestructible." But on Jan. 28, 1958, the sheer force of will he had summoned so many times finally failed him. Driving to his home in Glen Cove, N.Y. after a long day spent at his liquor store and a nightclub, Campy apparently fell asleep at the wheel. His rental car slammed into a telephone pole and turned over on its right side. The accident left him a quadriplegic, and he would never walk again.

The finality of the diagnosis hit Campanella hard in the years ahead. Baseball, the thing he loved most, had been taken from him.

His marriage soon fell apart, and he even began drinking heavily. But somehow he pulled himself out of a profound depression. "I wanted to live more than I wanted to die," he later admitted.

His life was far from over. As one of America's first "celebrity" quadriplegics, Campy became a symbol of what was then called the "handicapped" or "crippled" community. And Campy embraced his position wholeheartedly, making frequent public appearances in a wheelchair and raising awareness of the difficulties faced by the disabled. He seldom turned down their requests, whether it was merely showing up at the National Wheelchair Games, helping out a Bronx paraplegic trying to get a job as a cabbie, or simply giving a pep talk to a recently diagnosed quad. 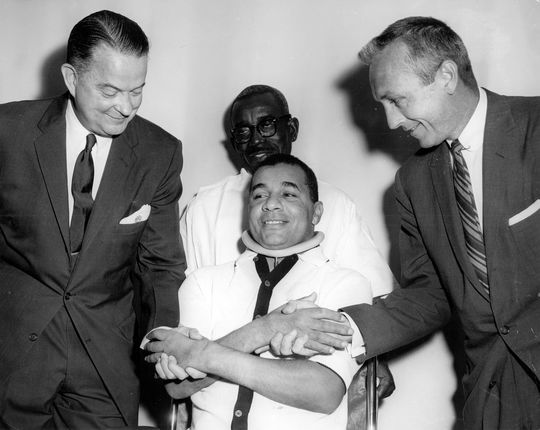 Roy Campanella poses for a picture with Dr. Rush (L) and Dr. Lauman(R) during his recovery. BL-1766-68n (National Baseball Hall of Fame Library)

Through it all, a smile never seemed to leave his lips, though his "second" life as a quad was a never-ending ordeal. Each morning began with a two hour routine of being lifted out of bed, bathed, shaved, and dressed by an attendant. Infections and ulcers constantly posed threats, as did an America then lacking even the most basic of accommodations for the wheelchair-bound.

But somehow Campy, just as he had on the ballfield, refused to give up. "He never, never complained," observed his friend Raymond Ormand. "It was unbelievable."

In the 35 years he spent in a wheelchair, baseball was never far from his mind, and he still believed he had something to contribute. "The only thing affected by that crash was my body, not my brain," he once remarked. Eventually, he found his calling coaching the Dodgers' young catchers at Vero Beach each spring training.

In the last years of his life, baseball seemed to be the only thing keeping him going. Despite mounting health problems, he somehow managed to attend most of the Dodger home games and insisted on making the annual summer trek to Cooperstown for the new crop of Hall of Fame inductees following his own election in 1969. 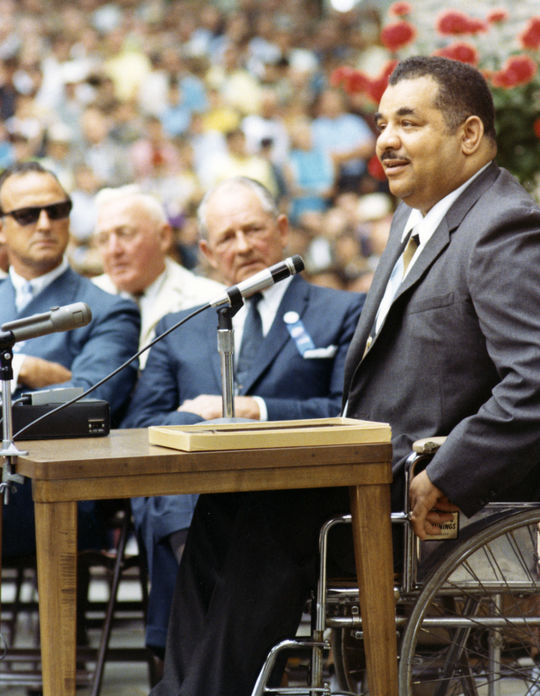 In February 1993, he showed up at Dodgertown to work with his latest protégé, a youngster named Mike Piazza, who won the starter's job after a sensational spring.

Campanella did not live to see Piazza achieve stardom. That summer, he suffered a heart attack and was gone by the time paramedics arrived. But his legacy, both as a ballplayer and as a symbol of hope to the disabled, was more than assured.

"No one had more courage than Roy Campanella," Dodger owner Peter O'Malley said. "To me, he was the greatest Dodger of them all."

Neil Lanctot is the author of Campy: The Two Lives of Roy Campanella. 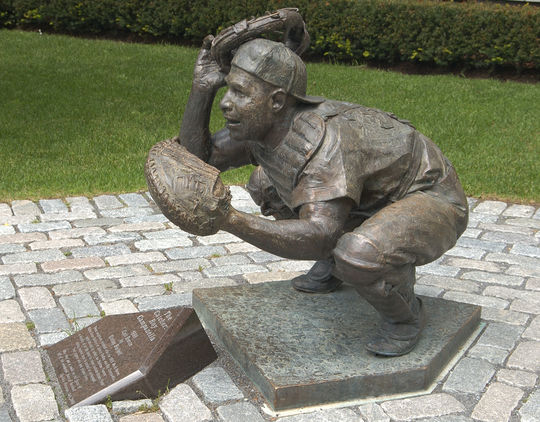