The Arizona Diamondbacks defeated the Cleveland Indians 12-7 at the 54th Hall of Fame Game on July 24, 2000, at Doubleday Field.

Four home runs were hit over the course of the first three-and-a-half innings of play to leave the score tied at three heading into the bottom of the fourth.

Down 1-0 in the bottom of the first, Arizona first baseman Greg Colbrunn hit a three-run shot to give the Diamondbacks their first lead of the game.

The Indians responded with back-to-back solo shots from Travis Fryman and Álex Ramírez to tie the game at three.

In the top of the fourth, Ricky Ledee hit another solo shot to give Cleveland a 4-3 advantage, but the Diamondbacks responded with two runs in the bottom of the fourth to retake the lead.

Both teams tacked on a run in the sixth inning, and the Indians added another in the top of the seventh, but the Diamondbacks stormed back with a six-run bottom of the eighth to put the game out of reach. 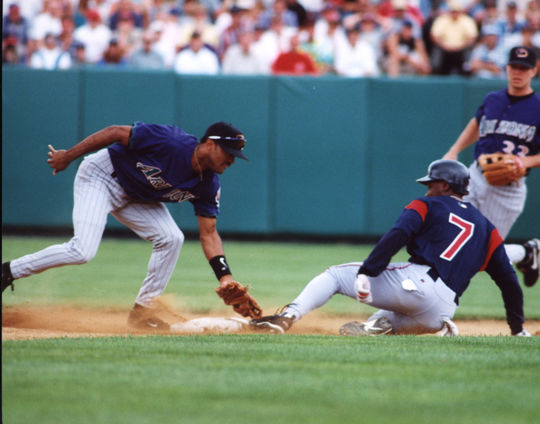 Kenny Lofton of the Indians slides into second base ahead of the tag of Diamondbacks shortstop Tony Womack as Jay Bell backs up the play during the 2000 Hall of Fame Game. (Tom Ryder/National Baseball Hall of Fame and Museum)

Luis Terrero led off the inning with a single and scored on Hanley Frías’ double to begin the rally. Five runs later, the Diamondbacks' rally was finally extinguished.

Cleveland got one back in the top of the ninth on a sacrifice fly that scored Zach Sorenson, but that was as close as it could get.

Six different Cleveland players had multi-hit games, and Ramírez led the way with two RBI. The Indians had 17 hits on the day while the Diamondbacks totaled 15.

For Arizona, Colbrunn’s three RBI were a game-high, though three other Diamondbacks had two RBI.

C.C. Sabathia, who had turned 20 years old just three days earlier, started and pitched three innings for the Indians, giving up three runs on three hits and striking out four. None of the 10 pitchers used in the game pitched more than four innings.

Terrero won the game’s Most Valuable Player Award after a 2-for-4 performance that included two runs scored and several run-saving defensive plays in center field. 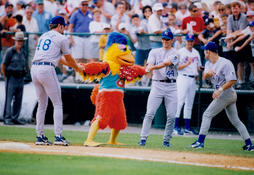 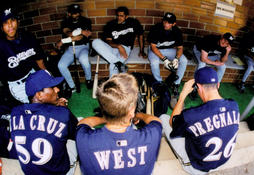 The Brewers defeated the Marlins 6-2 at the 2001 Hall of Fame Game.