A five-run ninth inning spurred the Brooklyn Dodgers past the Philadelphia Athletics 9-4 in the 10th Hall of Fame Game in Cooperstown on July 23, 1951.

The victory gave the National League a 6-4 overall edge over the American League while breaking a three year drought for National League teams, which had not won a Hall of Fame Game since 1947.

The contest featured five home runs, three from the Dodgers and two from the Athletics.

Joe Coleman started the game for the Athletics and pitched a scoreless first inning before issuing six walks in the second inning, allowing the Dodgers a quick 3-0 lead.

Philadelphia responded in the bottom half of the inning with a Pete Suder solo shot over the left-center field fence, then took the lead in the third inning with a three-run home run from Gus Zernial. 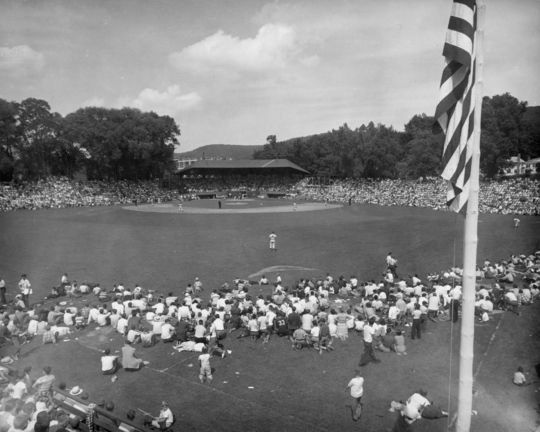 Fans were photographed sitting in the outfield of Doubleday Field during the 1951 Hall of Fame Game. (National Baseball Hall of Fame and Museum)

Leading off the top of the fifth inning, Duke Snider crushed a home run over the right field wall to tie the score.

The game remained knotted until the top of the ninth inning when, with a runner on first, Carl Furillo homered to center field to give the Dodgers the lead for good. Brooklyn would tack on an additional three insurance runs in the inning when Cal Abrams lifted another two-run home run and Gil Hodges hit an RBI double.

Four different Dodgers had multi-hit games, while center fielder Dave Philley was the only Philadelphia player to record more than one hit.

Coleman pitched a complete game for the Athletics, allowing nine runs on 11 hits while walking six and striking out just one. Erv Palica started for Brooklyn and threw six innings of five-hit ball. Phil Haugsted replaced him in the seventh inning and earned the win. 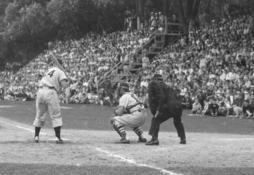 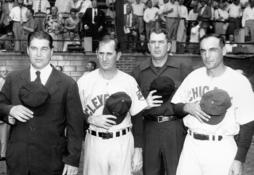 The Cleveland Indians defeated the Chicago Cubs 4-2 in the Hall of Fame Game of 1952.