Six innings of four-hit baseball from starter Sam Jones and three home runs were enough for the Cleveland Indians to down the Chicago Cubs 4-2 in the 11th Hall of Fame Game on July 21, 1952, at Doubleday Field in Cooperstown.

In front of a crowd of 7,765, Jones surrendered a two-run home run to Chicago left fielder Tommy Brown in the bottom of the fifth inning, but did not allow any other runs in his six innings pitched. He walked one and struck out three.

The Indians loaded the bases in the top of the second inning with a hit batter, a walk, and an infield single, but Chicago left fielder Hank Sauer backed into the crowd and robbed first baseman Bill Glynn of a hit by making a spectacular catch, and Cubs’ starter Dick Manville escaped the inning without allowing a run.

After a scoreless third inning, Cleveland established a two-run lead in the top of the fourth when right fielder Harry Simpson and catcher Joe Tipton hit back-to-back solo home runs off of Manville. 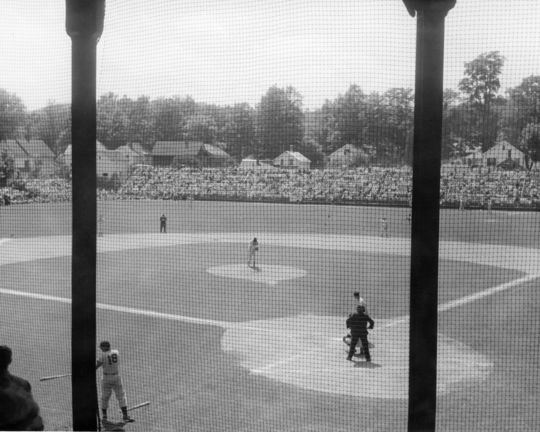 Game action between the Indians and Cubs on Doubleday Field.

Caps removed in honor of the National Anthem by a group on the field. (Hollis)

Brown’s home run an inning later tied the game at two, but the Indians responded with a home run from Johnny Berardino in the seventh inning to take the lead. Cleveland tacked on another insurance run in the top of the ninth inning when Glynn scored on a Hank Majeski infield single.

The Cubs threatened in the bottom of the ninth when catcher Johnny Pramesa reached on an error by Berardino at second base with one out, but Cleveland reliever Dick Rozek retired the next two Chicago batters on a pop out and a line out to end the game.

Berardino was the only player to record more than one hit in the contest, going 2-for-2 at the plate with a run scored for the Indians. Chicago’s four hits were scattered among four different players, with Brown’s home run the only hit that yielded any runs.

On the mound, four pitchers combined for 15 strikeouts, led by a game-high six from Rozek, who pitched a scoreless final three innings to secure the win for the Indians. 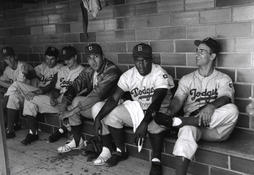 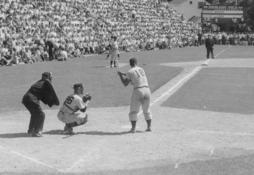