Part of the PRE-INTEGRATION series
Written by: Erik Strohl

If I were asked what my favorite trophy was out of the hundreds in the vast collection of the Baseball Hall of Fame, I would not have to hesitate for a second.

This may seem like a surprising statement to make, but it is true. We certainly have dozens of trophies which could qualify for this honor. MVP trophies. Cy Young awards. Silver bats. Gold Gloves. World Series trophies. Nineteenth century trophies signifying various accomplishments. Even the trophy received by Lou Gehrig from his teammates the day he made his famous “Luckiest man on the face of the Earth” speech. But none of these would be my choice.

I would in fact choose not one, but a special set of unique trophies donated by two Hall of Famers more than a half century ago. Individually they are beautiful and exceptional pieces of art, signifying the pinnacle of hitting excellence. Together they are a testament to one famous fan’s love of the game. They display a marriage between the celebrity of sport and the celebrity of theater. They celebrate the place of baseball at the forefront of American popular culture. And, oh yeah, they also celebrate two of the greatest ballplayers who ever lived.

The trophies to which I refer are the George “Honey Boy” Evans trophies, individually designed, executed and given to the “World’s Championship Batsman,” or that player with the highest batting average in all of major league baseball. Awarded from 1908 through 1912, they were presented by George Evans, one of the most famous vaudeville actors and overall entertainers of his time, and a tremendous fan of the game. 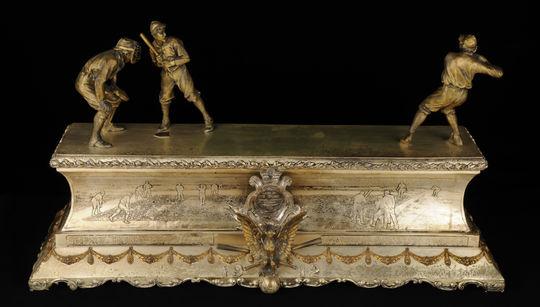 Born in Pontlottyn, Wales in 1870, George Evans immigrated to America as a young boy. Blessed with a beautiful singing voice, he eventually became a professional singer in his early 20s and enjoyed average success in minstrel shows, based primarily out of Illinois and Ohio. This experience prepared him for a career as a blackface performer in vaudeville, which he began in the mid-1890s. A songwriter besides an entertainer and musician, he co-wrote the well known hit “In the Good Old Summer Time.” He eventually ceased performing in blackface and concentrated instead on witty singing and storytelling, becoming one of the leading performers and monologists of his day. These acts were very popular in the early years of the 20th century, and Evans competed as an equal with such famous luminaries as Will Rogers.

In 1907, fellow songwriter Jack Norworth composed the tune “I’ll Be True to My Honey Boy” for George Evans, one of his personal friends. It would soon become the staple of Evans’ performances, a sort of theme song, and Evans would carry the moniker as part of his name for the rest of his life. The following year Norworth, a consummate pro who penned countless songs during his lengthy career, wrote the tune for which he is most famous today. In a stroke of neat coincidence, “Take Me Out to the Ball Game” became the most famous baseball song ever written.

In 1908, Evans left vaudeville and returned to his roots with the Cohan and Harris Minstrels, to which he later bought the rights and toured independently as the Honey Boy Minstrels. George M. Cohan, original co-owner of the outfit, was the most famous song and dance man of his era, portrayed famously on the silver screen by James Cagney in his Oscar Award-winning performance in 1942’s Yankee Doodle Dandy.

In May 1908, the Los Angeles Times reported that “George Evans, the song writer and comedian, has offered a…..cup for the champion batter of the world for the season of 1908. The cup will be known as the ‘Honey Boy Evans Cup.’ ” Two years later the Washington Post noted: “George Evans, the star of the ‘Honey Boy Minstrels,’ has probably taken first honors as the most enthusiastic baseball ‘bug’ of the present day. Mr. Evans annually backs up his enthusiasm as the champion ‘fan’ by presenting a trophy known to all baseball players as the ‘Honey Boy’ trophy to the batsman of the American or National League attaining the highest batting average of the season.”

The inaugural trophy for the 1908 season was presented to Pirates shortstop Honus Wagner on May 20, 1909, prior to a game in New York against the Giants. He topped the nearest competitor by 20 points with his .354 average in 1908. The New York Times reported “The 7,000 people who braved the dark clouds and the damp, shivery weather saw Wagner presented with a silver trophy in the shape of a cup…..The huge cup having been brought out to the home plate by a little boy, and Wagner, having shuffled up to the plate with his hat off, Joe Humphreys made the presentation speech akin to a marriage vow. “Take it and honor it and treasure it and—‘Obey it,’ yelled somebody in the bleachers, ‘until death do us part.’ ‘Fill it up, Wagner! Fill it up!’ yelled the bleachers.” 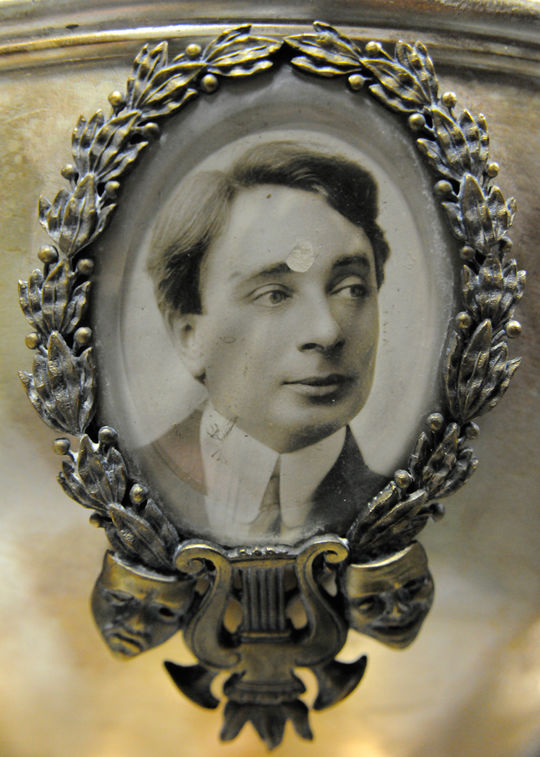 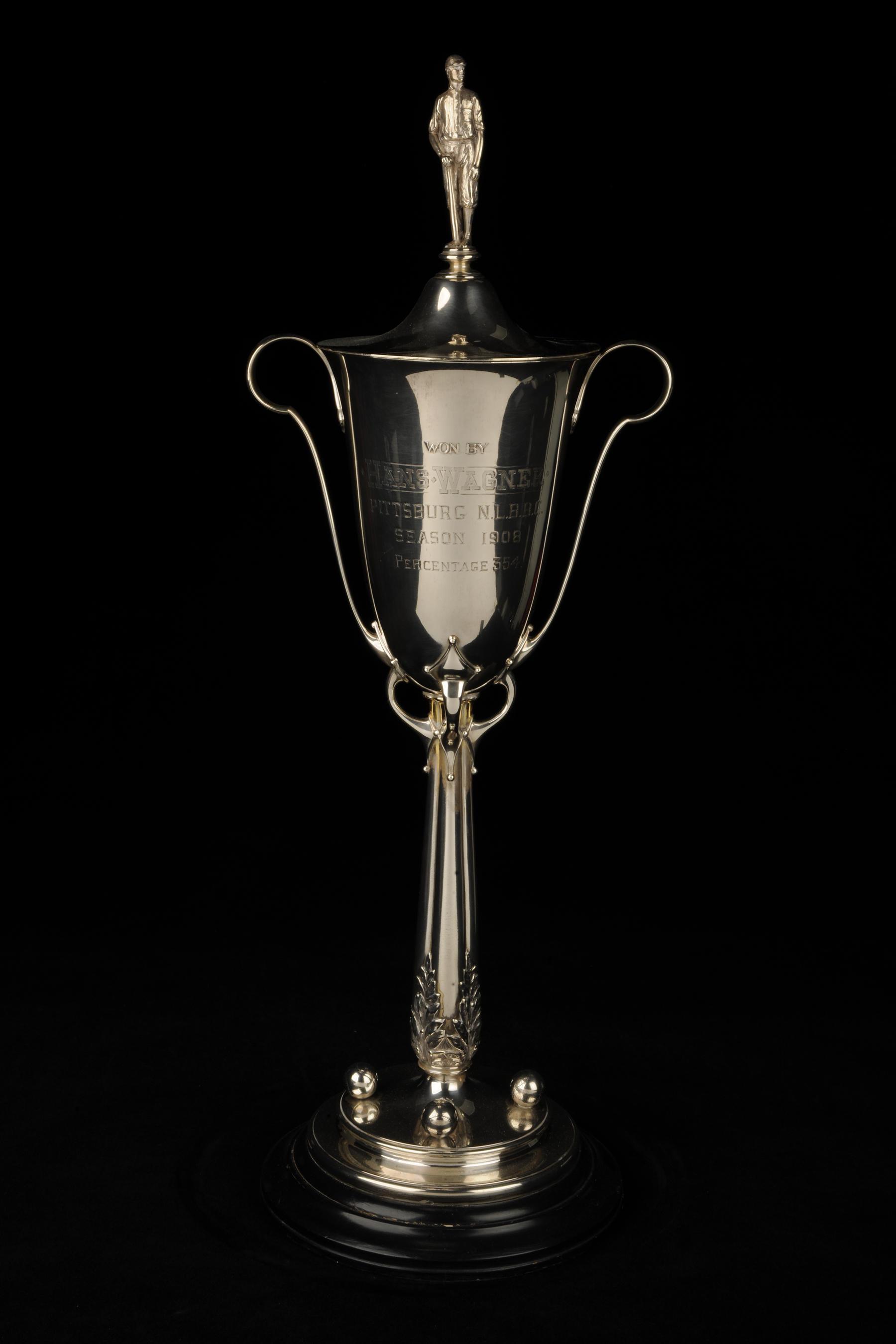 The Washington Post reported, “During the intermission the curtain was rung up, and it revealed on the stage Ty Cobb, Mr. [George] Evans, and Mr. C. Henry Cohen, a prominent local attorney and baseball fan. The trophy was sitting on a pedestal in the center of the ground. Mr. Cohen stated ‘that Augusta and Georgia were most proud of Ty Cobb, and that Augusta felt truly grateful that her most distinguished athlete should have chosen his home city for the presentation of the trophy’….A storm of cheers broke forth when Cobb rose to reply. He was plainly nervous, and he could have faced Ed Walsh at his best with much more nerve than he faced an audience composed of his admiring friends and neighbors. The famous ball player said that he felt deeply appreciative of the gift. He said that it had always been and will always be his intention to play for the best interests of the team he was with, and that his own personal record was always a matter of secondary consideration.”

Cobb won the cup again the following year in a hotly heated contest with Nap Lajoie. In 1910, they battled to the wire for the American League batting crown. Conflicting numbers in the newspapers along with Lajoie’s controversial final-day 8-for-8 performance added to the commotion. Eventually, AL president Ban Johnson declared Cobb the champion with a .385 average. He was presented his second “Honey Boy” cup the following August in Detroit. Some 70 years later, researchers discovered of a record-keeping error from 1910 which led to Lajoie’s eventual recognition as the actual batting champ.

Evans stopped awarding a cup after the 1912 season. There seems to be no explanation in the historical record, but both his health and finances could have restricted his ability to continue such generosity. Evans lived for only three more years, dying in March 1915 from stomach cancer at the age of 44. Two years prior to his death in January 1913, he was unanimously elected honorary president of the Baseball Players’ Fraternity, a testament to Evans’ impact on the game.

A letter from President Dave Fultz stated, “Because of the great interest you have always evinced in the welfare of ball-players, your friendliness to them when off the stage, your eagerness to always extend to them every courtesy within your power when the teams of which they are members appear in the city where your production holds the boards….you have been elected honorary president of the Baseball Players’ Fraternity.”

It comes as no surprise that Evans was held in such high regard by the baseball industry. Almost 100 years after his death, the “Honey Boy” Evans cups provide a constant reminder of his legacy as one of the game’s biggest fans and supporters.