Class of 2019 inducted on historic day in Cooperstown

Raw emotion, humorous anecdotes, throngs of cheering fans, moments that were bittersweet, others that embraced thankfulness. And there was even a musical soundtrack provided by a former player. The 2019 Hall of Fame Induction Ceremony had it all.

On a sunny Sunday afternoon, with temperatures in the low 80s with occasional cloud cover, the wait for baseball immortality finally came to an end for six of the sport’s greats from the last few decades. Historic closers Mariano Rivera and Lee Smith, durable and consistent starting pitchers Mike Mussina and Roy Halladay and slugging designated hitters Harold Baines and Edgar Martinez were inducted as the Class of 2019.

Continuing a summer tradition that began back in 1939, this year’s ceremony was held at the Clark Sports Center, located about a mile south from the Plaque Gallery. An estimated 55,000 fans – the second-largest in history, trailing only the 82,000 fans that attended the 2007 induction of Tony Gwynn and Cal Ripken – came to witness this beloved National Pastime rite.

With an empty stage soon to be filled with living baseball cards, the ceremony began with MLB Network fixture Brian Kenny’s introduction of the returning Hall of Famers. Cheers were afforded all, with Reggie Jackson’s arrival eliciting chants of “Reg-gie” and Rich Gossage’s appearance was followed with calls of “Goose.” And Hank Aaron came out to a rousing cheering and a heartfelt standing ovation.

Acknowledged reverently were Hall of Famers Willie McCovey and Frank Robinson, who both passed away since last year’s induction.

Before long, and live in front of a national television audience on the MLB Network, the newest Hall of Famers were at the podium, telling their stories, sharing the experiences, thanking those who made the day possible, and trying to put into words on joining baseball’s most exclusive fraternity. 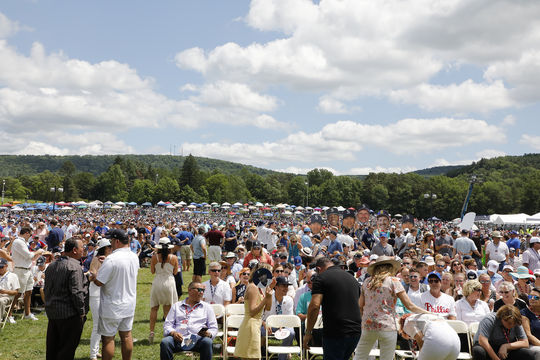 The 2019 Induction Ceremony featured an estimated crowd of 55,000, the second-largest in Hall of Fame history. (Milo Stewart Jr./National Baseball Hall of Fame and Museum)

This day’s pastoral setting, with a sea of jersey-clad fans enveloping everything through to the rolling hills toward the rear, seemed the perfect setting for a baseball-themed happening.

Leading off for the legendary lineup of inductees was Mussina, who recorded 270 wins and a .638 winning percentage. He was a five-time All-Star and seven-time Gold Glove Award winner. Fans repeated “Moose” as he approached the microphone.

“I'm standing up here with the best who ever played the game, some are my former teammates, some are former opponents, some I grew up watching on television. So the obvious questions are: what am I doing up here, and how in the world did this happen,” joked Mussina. “I'm sure that every year the inductees take advantage of this one chance to stand up here and tell great stories about their lives, their challenges, their successes and their failures.

“In about a million words or less, I want to give you a few of my stories. My baseball journey began in the backyards of our neighborhood, back in my hometown of Montoursville, Pa. It's located right next to Williamsport, the home of Little League Baseball.

"Both are connected to Cooperstown by about a 200-mile stretch of the Susquehanna River.”

After thanking family and friends who helped him along the way, Mussina summed it all up. 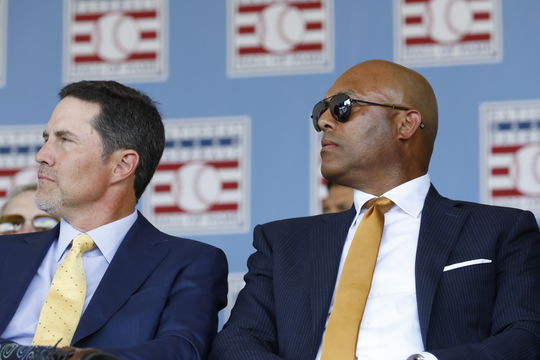 Class of 2019 Hall of Famers Mike Mussina and Mariano Rivera watch a TV monitor on stage during the 2019 Induction Ceremony. (Milo Stewart Jr./National Baseball Hall of Fame and Museum)

“Since I received the incredible and surprising news of my election to the Hall of Fame back in January, I spent a lot of time reflecting on my journey to Cooperstown,” Mussina said. “How did a kid from small town and rural Pennsylvania play enough wiffle ball to make it to the major leagues and pitch there for 18 years? I was never fortunate enough to win a Cy Young Award or be a World Series champion. I didn't win 300 games or strike out 3,000 batters. While my opportunities for those achievements are in the past, today I get to become a member of the National Baseball Hall of Fame. Maybe I was saving up from all of those ‘almost’ achievements for one last push. This time I made it.

Speaking for Halladay was his wife Brandy, who would sometimes become overcome with emotion during her speech.

“Anybody who thinks baseball truly isn't a family has never been involved in baseball. I know how honored Roy would be sitting here today with such accomplished men who have represented this game so well over the course of all of your careers,” she said. “Thank you for being such a good example to him and to supporting him in his career and all of his efforts.

“This is not my speech to give. I'm going to do the best I can to say the things I believe Roy might have said or would have wanted to say if he was here today.”

Baines, known during his career as quiet and unassuming, spoke with the same traits when addressing the audience.

A respected and clutch left-handed hitter, the six-time All-Star totaled 2,866 hits and drove in 1,628 runs, retiring 21st on the all-time RBI list. 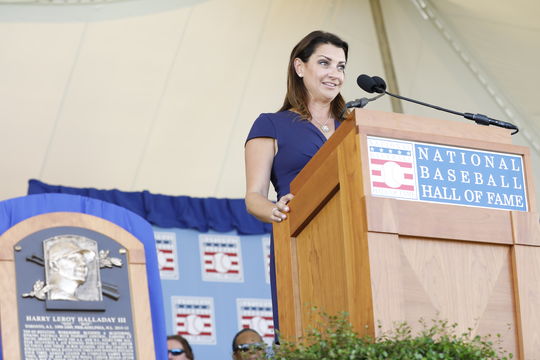 Brandy Halladay delivers a speech on behalf of her husband, Roy Halladay, during the 2019 Hall of Fame Induction Ceremony. (Milo Stewart Jr./National Baseball Hall of Fame and Museum)

“Somewhere, someplace in my career, I acquired a reputation for not saying much. I'm not sure why,” he added with a smile. “Maybe it was May 9, 1984, when my home run in a 25-inning game to beat the Milwaukee Brewers. When a writer approached me postgame, one asked, Harold, it appeared you got all of that one. ‘Evidently,’ I said. Perhaps the reputation was born.”

Baines would later expand on how humbled he was by the honor of election to the Hall of Fame.

“It has taken time to sink in. Moments like the Hall of Fame orientation, signing the wall where my plaque will hang, standing here today in front of tens of thousands of baseball fans, makes it feel like less of a dream,” he explained. “In the end, when you ask me why I never have been outspoken or said very much, think of my dad and the lessons he passed onto me many years ago, often as we were playing catch in the yard. As he told me, ‘Words are easy, deeds are hard. Words can be empty, deeds speak loudest, and sometimes they echo forever.’”

Martinez, introduced with the echoes of “Ed-gar” following, was one of the game's best pure batsman and a Mariners favorite. The third right-handed batter in history with as many as seven consecutive seasons with a .300 average, .400 on-base percentage and .500 slugging percentage, he won two batting crowns, was a seven-time All-Star and earned five Silver Slugger Awards.

“It is hard to believe that a dream that started when I was about 10 years old would take me on an amazing journey,” Martinez said. 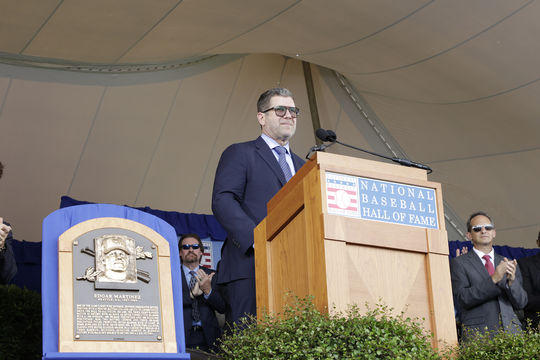 Ending the 2019 Induction Ceremony were, appropriately enough, the pair of closers. First up was Smith, who saved 478 career games, topping the all-time list for more than a decade. The first to record at least 30 saves in 10 different seasons, he was named to seven All-Star teams, and earned his league's Reliever of the Year honors three times.

“First, I'd just like to say I'm really honored to be here on this stage alongside all these baseball legends. Although I'm a little nervous with all these great hitters sitting behind me,” Smith said.

“While my plaque in the Hall of Fame has a Chicago Cub on my hat, all eight teams I played for were outstanding organizations. The fans in all eight cities had the same love of the game and I felt their energy every time I recorded that 27th out. It drove me to try my hardest.”

Rivera, appropriately, closed the three-hour ceremony with the day’s final speech. But prior to that, longtime Yankees centerfielder Bernie Williams, now an accomplished jazz guitarist, provided the event’s soundtrack when he performed his unique version of The Star-Spangled Banner at the beginning of the day. Later, prior to when Rivera gave his speech, Williams returned to the stage for an updated take on Take Me Out to the Ball Game with a little Enter Sandman included for his former teammate.

Rivera set the standard for relief pitchers with unprecedented consistency and efficiency as a pillar of the Yankees dynasty of the 1990s and 2000s. His devastating cut fastball frustrated batters, generating broken bats at a prolific rate. He saved record 652 games, compiled a 2.21 career ERA, was 13-time All-Star and recorded 40 or more saves in nine seasons. 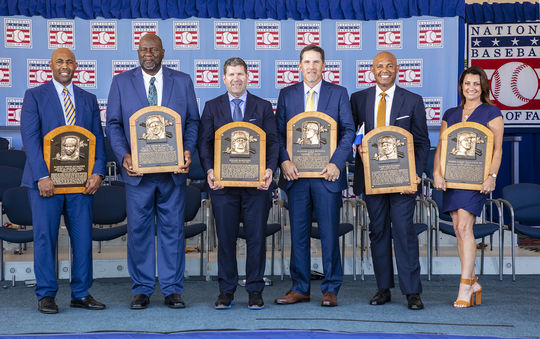 The Hall of Fame Class of 2019 poses on stage with their plaques following the 2019 Induction Ceremony. (Milo Stewart Jr./National Baseball Hall of Fame and Museum)

Sitting together in the audience were Derek Jeter, Jorge Posada and Andy Pettitte, the three other members of the Yankees famed “Core Four,” along with Tino Martinez.

“Derek, Andy, Mr. Posada, Bernie Williams, Mr. Tino Martinez, thank you, guys. I love you, man. You guys mean so much to me. To all my friends, I got my family here, the rest of the family, my friends here, thank you. Thank you for all that support.”

The National Baseball Hall of Fame’s 2020 Induction Weekend will take place July 24-27, with the Induction Ceremony scheduled for Sunday, July 26. 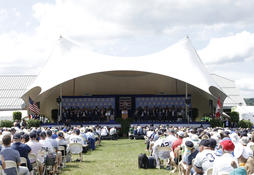 A record number of Hall of Famers returned to Cooperstown to welcome Harold Baines, Roy Halladay, Edgar Martinez, Mike Mussina, Mariano Rivera and Lee Smith into the Hall of Fame. 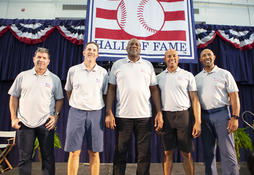 With less than 24 hours until the Induction Ceremony, the Class of 2019 is preparing for the momentous occasion. 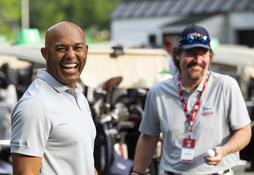 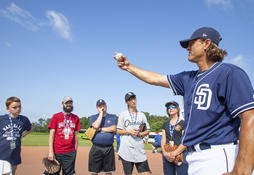 The return to Cooperstown brings back Induction Ceremony memories for Hall of Famers.