A total of 571 ballots were cast by BBWAA voters in 2014, marking the 11th straight year (and 12th overall) that more than 500 ballots have been cast. A record 581 ballots were cast in the 2011 election. Voting privileges are extended to those BBWAA members meeting their organization’s Hall of Fame voting qualifications and in good standing with the BBWAA. Voters can select from zero to 10 names on their Hall of Fame ballot. Votes on 75 percent of all ballots cast are necessary for election.

The BBWAA ballot featured 36 players, including 19 new candidates and 17 returnees. Seventeen players will return for consideration in 2015.

See all Hall of Fame voting history at Baseball-Reference.com 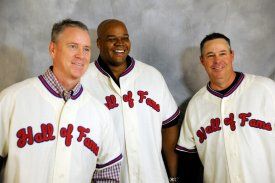