Fifteen years ago, an Academy Award-winning actress came to Cooperstown to discuss her role in a baseball classic.

Teresa Wright, the only actor to be nominated for Academy Awards for his or her first three films, was in Cooperstown in April 2000 to attend an event at the National Baseball Hall of Fame and Museum surrounding the showing of the 1942 film “The Pride of the Yankees.”

After the Lou Gehrig biopic screening, which starred Gary Cooper as the longtime first baseman of the New York Yankees and Wright as his wife Eleanor, the packed crowd at the Hall’s Grandstand Theater heard the 82-year-old actress discuss her movie career and her role in the baseball classic. 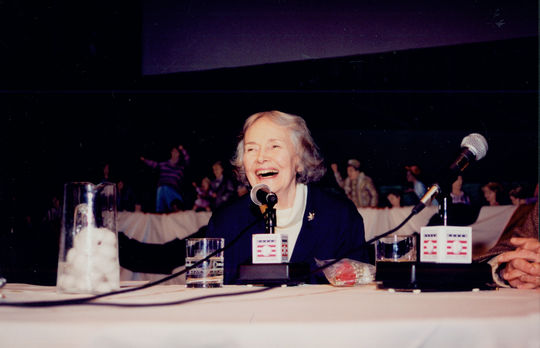 When they called I couldn’t believe it. I just laughed. I can’t tell you how funny this is because I didn’t throw a ball when I was eight let alone at almost 80.

In response to a question from an audience member, Wright claimed to have never followed the game prior to making the beloved Gehrig film. 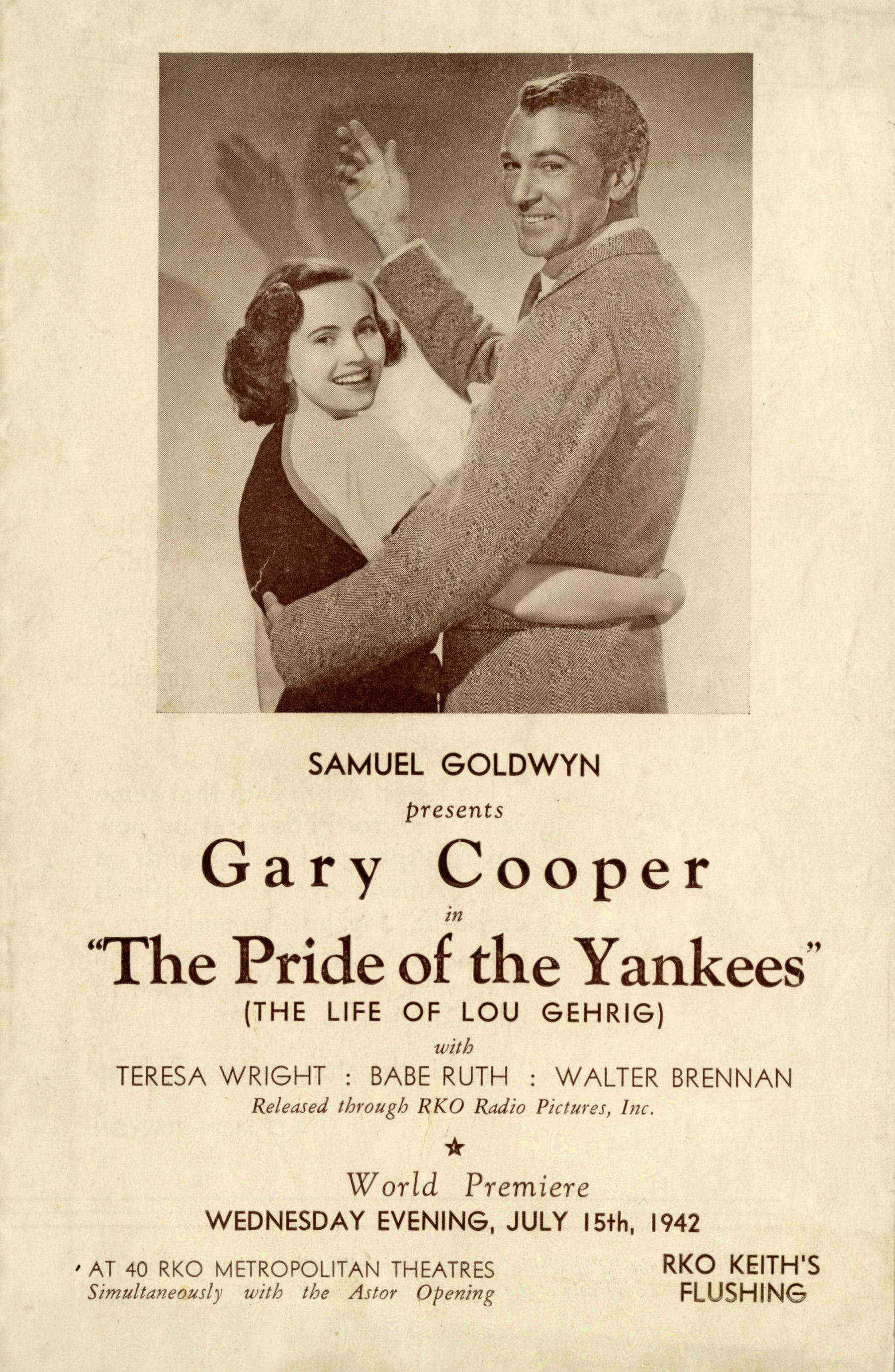 Program for the world premiere of the film “The Pride of the Yankees,” featuring an image of Teresa Wright and Gary Cooper, who portray Eleanor and Lou Gehrig. (National Baseball Hall of Fame Library)

Wright’s attitude lasted until she was asked by the Yankees to throw out the first pitch before a game on July 4, 1998. The franchise celebrates the date every season because it was on July 4, 1939, that Gehrig gave his famous “I consider myself the luckiest man on the face of the earth” speech. “The Iron Horse,” suffering from amyotrophic lateral sclerosis, was elected to the Hall of Fame in 1939 and passed away in 1941 at the age of 37.

“When they called I couldn’t believe it. I just laughed. I can’t tell you how funny this is because I didn’t throw a ball when I was eight let alone at almost 80,” Wright said. “Afterwards, we went up and watched and naturally I was interested, but I didn’t know what was going on. The next day I began watching on television and the more I watched the more I began to understand. Then I began to read the papers, so the baseball writers have become very important to me because they’re sort of my professors.

When asked about Eleanor Gehrig’s reaction to the film, Wright remembered the young widow’s response was very positive.

“I think it meant a lot to her. With the sadness of Lou’s early death, I think, in a way, it kind of gave him back to her for a while,” Wright said. “Having her on the set occasionally, where she was so warm, friendly and supportive, only helped. She was kind of like a visitor to the set, but not as though she were overlooking or making suggestions.

“To me it was just a role, the part of a woman whose husband is a big baseball player and has this terrible disease,” she added. “It was their love story, so I read it as a love story and not a baseball thing, which I knew nothing about.”

In a 1942 Louella Parsons newspaper column, Eleanor Gehrig is quoted as having had initial misgivings about Wright.

“When Sam [producer Samuel Goldwyn] first told me that Teresa would play me I felt that she was much too young. I said ‘Barbara Stanwyck, Jean Arthur or an actress with more experience would be better.’ But now I know no one could do better, or even as well as little Teresa. Of course, she's prettier and younger, but then no woman could object to that, could she?” 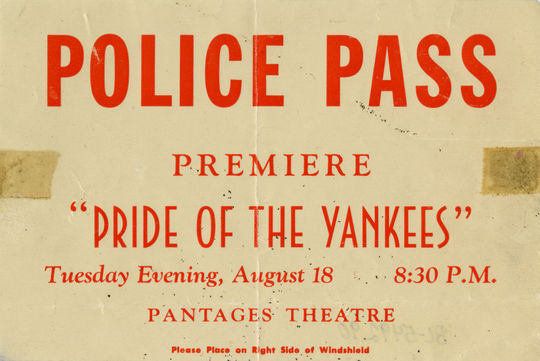 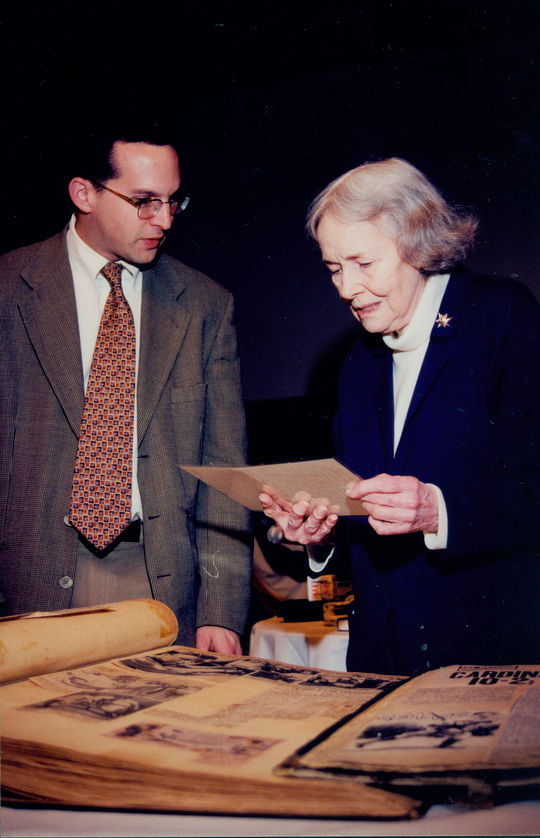 Hall of Fame President Jeff Idelson (then a vice president) and actress Teresa Wright look at Lou Gehrig material in the Hall of Fame collections. Shown in the foreground are two scrapbooks on Lou Gehrig’s career kept by wife Eleanor, as well as a prop scrapbook made specifically for the film “The Pride of the Yankees” (Milo Stewart, Jr. / National Baseball Hall of Fame)

Wright, who had worked opposite such legendary leading men as Spencer Tracy, Marlon Brando and Robert Mitchum, had fond memories of co-starring with Cooper.

“He was very sweet, very dear,” Wright said. “Acting-wise, he’s just himself in a way, and yet there’s something that goes on that you don’t see. You see it on the screen. There’s a lot more there than you give him credit for at the time.”

According to Wright, “The Pride of the Yankees” is still popular because people just love baseball.

“It is a very American game,” Wright said. “Everything that is good about this country is in baseball.” 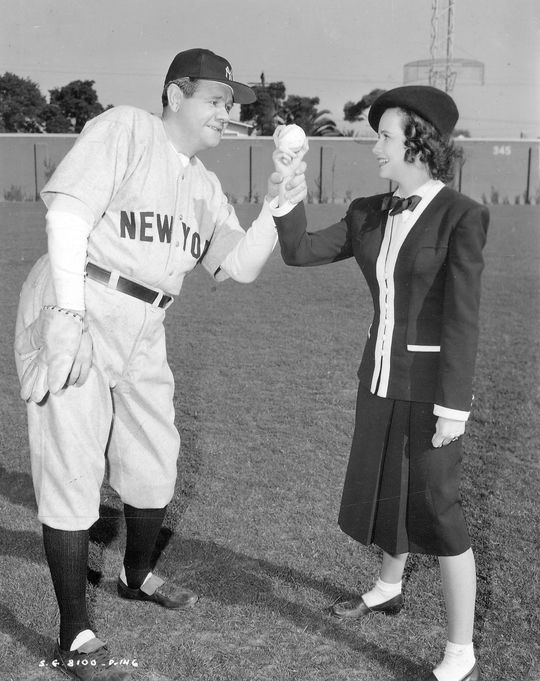 Hall of Famer Babe Ruth instructs actress Teresa Wright on how to properly throw a baseball on the set of the movie “The Pride of the Yankees.” Ruth portrayed himself in the baseball classic. - BL-3036.2000 (National Baseball Hall of Fame Library)