While the skies were shining in Cooperstown, the tears were falling on stage as an emotional 2016 National Baseball Hall of Fame Induction Ceremony entered the history books.

The ceremony, an annual summer tradition since the Hall of Fame first officially opened its doors 77 years ago, saw slugging catcher Mike Piazza and multitalented center fielder Ken Griffey Jr. formally inducted on a brilliantly sunny Sunday afternoon, a day the baseball gods were smiling, with temperatures in the mid-80s.

On a raised stage on the grounds of the Clark Sports Center, with 48 returning Hall of Famers behind them and an estimated 50,000 fans in attendance – many sporting the colors of the Mets and Mariners –in front of them in a pastoral setting, the Class of 2016, who bring the total number of Hall of Famers to 312, shared with the crowd and a live television audience on the MLB Network their path to glory, thanked those who were helpful along the way, and in arguably the most poignant moments, were both tearful and sniffling when talking and glancing at their families seated nearby in the audience.

“You're going to make this harder than it is, I'm telling you right now,” Piazza warned the audience early on in his induction speech, all the while a small plane flying overhead pulled a long banner that read “Congrats Mike.”

Arguably the greatest offensive catcher in the sport’s history, Piazza burst on the national scene with the Dodgers in 1993 when he was the unanimous N.L. Rookie of the Year. The 12-time All-Star would later continue his success during a productive tenure with the Mets. Dependable defensively, Piazza led the N.L. in putouts four times, assists twice and fielding percentage once. The 10-time Silver Slugger Award winner retired having hit 427 home runs, 396 of which set a record for backstops. A career .308 hitter, he posted six seasons with at least 30 home runs, 100 RBI and a .300 batting average.

After naming a few favorite Mets teammates, such as John Franco and Al Leiter, Piazza talked about the franchise’s fans.

“How can I put into words my thanks, love, and appreciation for New York Mets fans? You have given me the greatest gift and have graciously taken me into your family,” Piazza said. “Looking out, today, at all the incredible sea of blue and orange brings back the greatest time of my life. You guys are serious. We didn't get off on the best foot, but we both stayed with it.

“At first, I was pressing to make you cheer and wasn't doing the job. You didn't take it easy on me, and I am better because of it,” he added. “Sometimes a jockey whips a horse. It isn't always pleasant to watch, but it gets results. The eight years we spent together went by way too fast. The thing I miss most is making you cheer. No fans rock the house like Mets fans. You are passionate loyal, intelligent, and love this great game. To be the only second Met to enter the Hall of Fame, following Tom Seaver brings me great pride and joy.”

Soon enough, though, it came to Piazza’s family and his real emotions came through.

“I couldn't imagine leaving the stage without thanking my family,” Piazza said. “My dad always dreamed of playing in the major leagues for his All American love of baseball. He could not follow that dream as the realities of life and having to support his family forced him to work. He built a great business and employed many people. 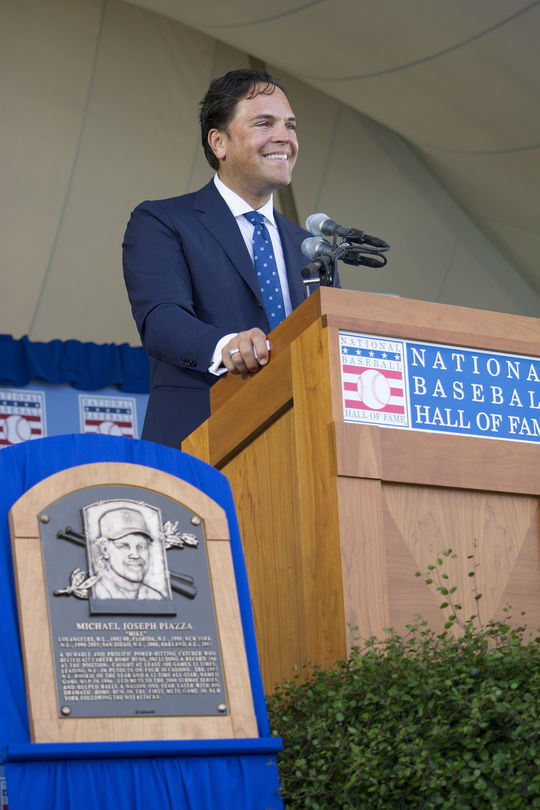 Mike Piazza, addressing the hoards of Mets fans who had come to witness his historic induction, said that "no fans rock the house like Mets fans." (Milo Stewart Jr. / National Baseball Hall of Fame) 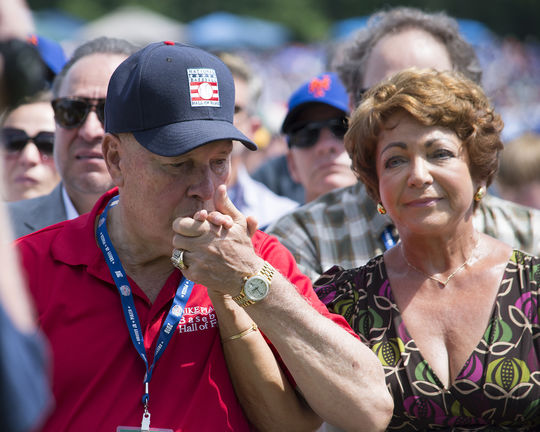 Vince and Veronica Piazza were at their son's Induction Ceremony, as he referred to them as the "most important factor of me being inducted into this Hall of Fame." (Milo Stewart Jr. / National Baseball Hall of Fame) 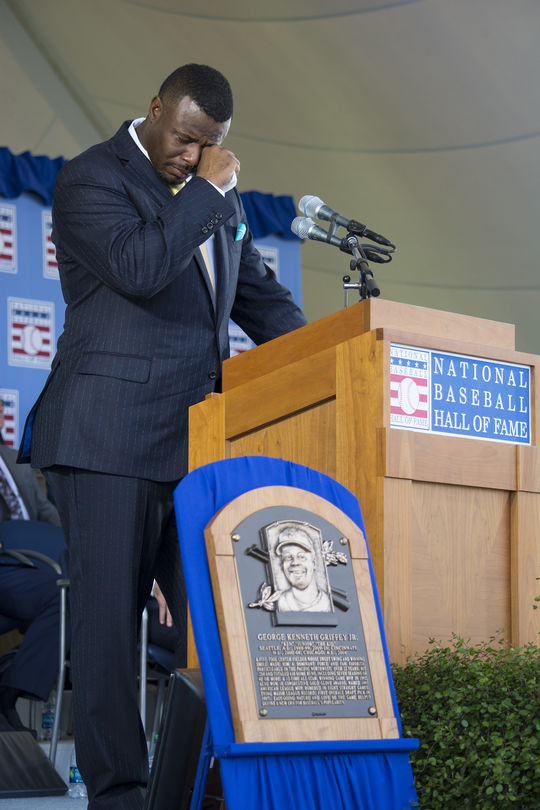 It was an emotional day for both Griffey and Piazza, as both shed tears during their respective Induction speeches. (Milo Stewart Jr. / National Baseball Hall of Fame) 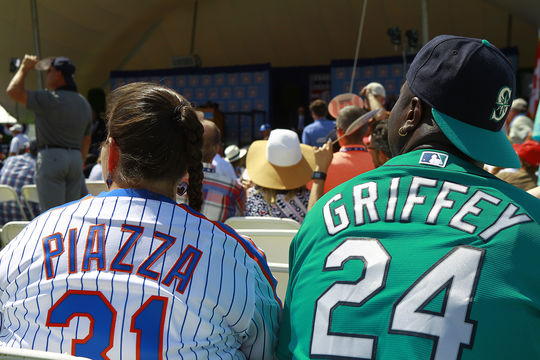 Ken Griffey Jr. and Mike Piazza fans were well represented at today's Induction Ceremony , as the crowd of 50,000 featured a sea of blue and orange, as well as green and white. (Larry Brunt / National Baseball Hall of Fame) 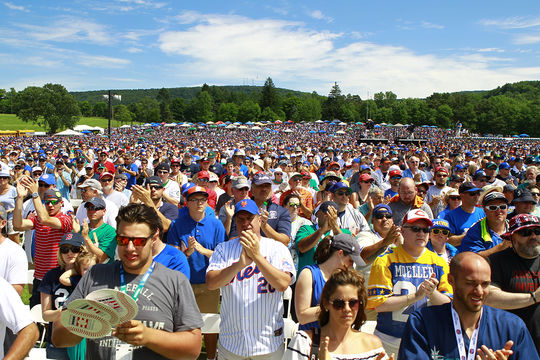 It is estimated that a crowd of about 50,000 people, tied for the second largest in Induction history, was present at today's Induction Ceremony. (Larry Brunt / National Baseball Hall of Fame)

“My father's faith in me, often greater than my own, is the single most important factor of me being inducted into this Hall of Fame. Thank you, Dad,” he added. “I know he watched every game, cried when I cried, was angry when I was angry, and celebrated more than I could ever celebrate. He is a man deeply devoted to his family and after having suffered a major stroke a few years ago, is stronger willed than ever. We made it, Dad. The race is over. Now, it's time to smell the roses.

“My mother gave me the greatest gift a mother can give a child. She gave me the gift of my Catholic faith. This has had a profound impact on my career and it has given me patience, compassion, and hope.”

Before Piazza left the podium he shared an excerpt from the speech "Citizenship in a Republic" delivered by former U.S. President Theodore Roosevelt at the Sorbonne, in Paris, France in April 1910.

“It is not the critic who counts; not the man who points out how the strong man stumbles, or where the doer of deeds could have done them better. The credit belongs to the man who is actually in the arena, whose face is marred by dust and sweat and blood; who strives valiantly; who errs, who comes short again and again, because there is no effort without error and shortcoming; but who does actually strive to do the deeds; who knows great enthusiasms, the great devotions; who spends himself in a worthy cause; who at the best knows in the end the triumph of high achievement, and who at the worst, if he fails, at least fails while daring greatly, so that his place shall never be with those cold and timid souls who neither know victory nor defeat.” 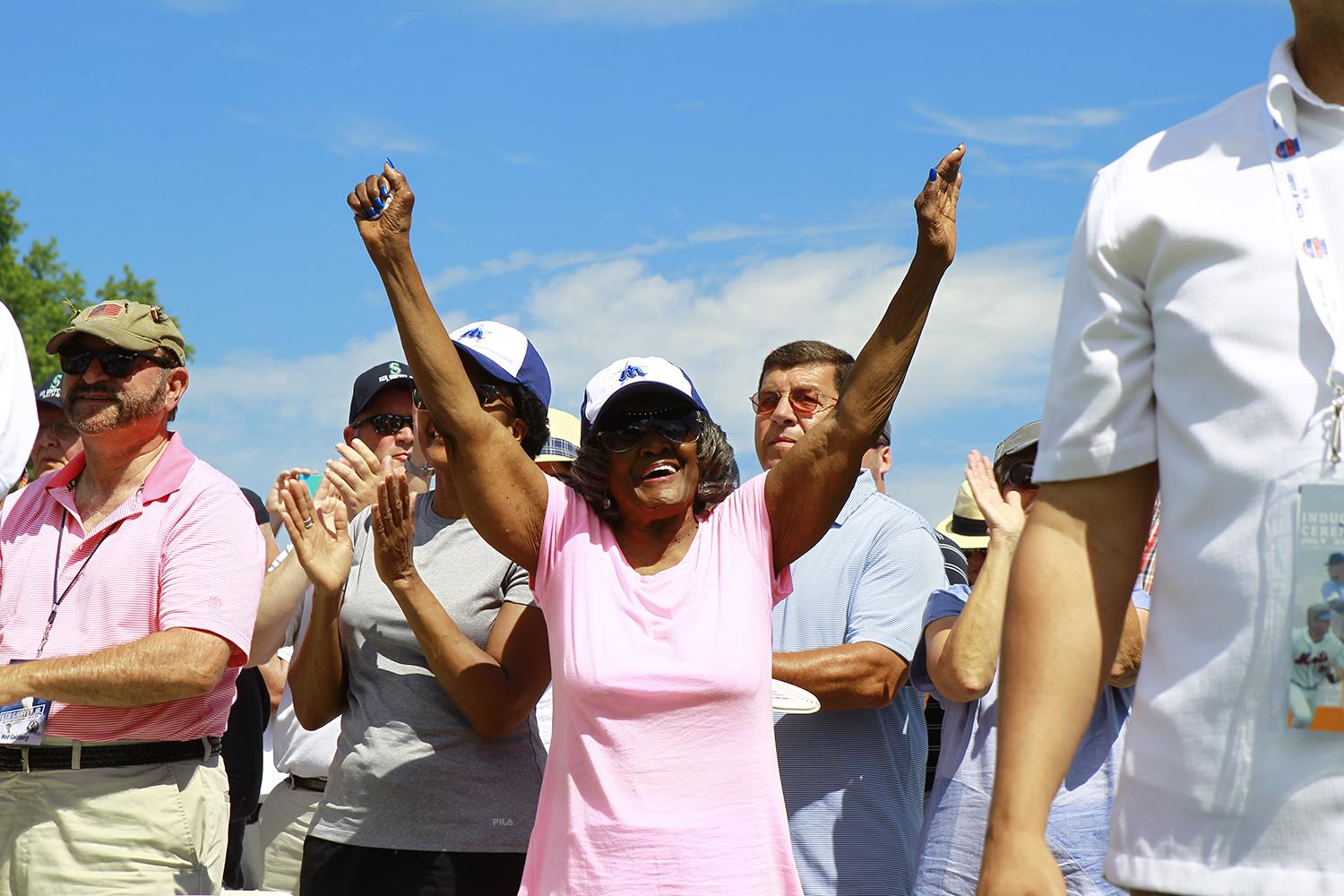 No distance was too far to travel -- as fans proudly donned their favorite Mets and Mariners gear -- to witness the historic induction of Piazza and Griffey. (Larry Brunt / National Baseball Hall of Fame)

Piazza closed by saying, “I have been devoted to this great game of baseball and it is a worthy cause. We players share our love of baseball with millions of fans. That love bridges generation, impacts lives, and helps heal wounds. I want to thank you all for sharing this with me. God bless you and thank you very much.”

Griffey, 46, was elected to the Hall of Fame with record support, being named on 99.3 percent of BBWAA ballots in January. Spending most of his career in center field for the Mariners and Reds, the 13-time All-Star could do it all on a ballfield, winning 10 consecutive Gold Glove Awards as well as seven Silver Slugger Awards. A unanimous American League MVP selection in 1997 – leading the league with 56 home runs, 147 RBI and 125 runs scored - he currently ranks sixth on the career home run list with 630.

Unlike Piazza, Griffey addressed his family early on in his speech and was often choked up talking about those closest to him.

“To my dad, who taught me how to play this game, but more importantly he taught me how to be a man. How to work hard, how to look at yourself in the mirror each and every day, and not to worry about what other people are doing,” Griffey said. “See, baseball didn't come easy for him. He was the 29th round pick and had to choose between football and baseball. And where he's from in Donora, Pa., football is king. But I was born five months after his senior year and he made a decision to play baseball to provide for his family, because that's what men do. And I love you for that.

“To my mom, the strongest woman I know. Raising two boys, having to be mom and dad. Splitting time to go to one another's games, me and my brother. She was our biggest fan and our biggest critic,” he added. “To my brother Craig, my biggest competitor, day and night we had these epic battles, whether it was football, basketball or baseball. But no matter what, you never gave up, never gave in. I just have one problem with you: How come when you won all my friends knew about it? And we didn't even have cell phones back then.

“You're one of the people who pushed me the most, and I will always love you for that.”

“I think once I started looking at the kids made it a little tough,” he said. “I can look at anybody else and I’m good but to see them smile and them start to cry … I think those three are the only ones that can do that to me. But looking at them – they mean everything to me.”

Before Griffey read the final few lines of his speech, he reach under the podium and pulled out a ball cap. To the delight of the crowd, he placed it on his head backwards, a familiar site to fans of “The Kid.” Afterwards, he explained the maneuver was a last-minute suggestion from fellow Hall of Famer Frank Thomas.

“There are so many great things that I could talk about, but we would be here all day,” Griffey said. “So I am going to leave you with one thing: Out of my 22 years, I've learned that only one team will treat you the best, and that's your first team. I'm very proud to be a Seattle Mariner.

“The two misconceptions of me are I didn't work hard, and that everything I made it look easy. Just because I made it look easy doesn't mean that it was and you don't work hard and become a Hall of Famer without working day in and day out.
“I want to thank my family and friends, the fans, the Reds, the White Sox and Mariners for making this kid's dream come true. Thank you.”

The estimated 50,000 fans in attendance tied the 1999 Induction Ceremony crowd for Nolan Ryan, George Brett, Robin Yount, Orlando Cepeda, Frank Selee, Nestor Chylak and Smokey Joe Williams. The largest numbers came in 2007 with the induction of Cal Ripken Jr. and Tony Gwynn, with an estimated crowd that year of 82,000. 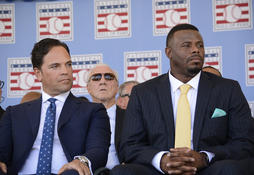 Class of 2016 Welcomed to Cooperstown by Huge Induction Ceremony Crowd 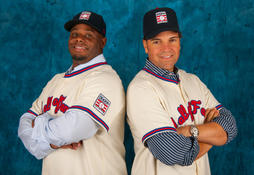 Class of 2016 Will Be Inducted in Less than Six Weeks 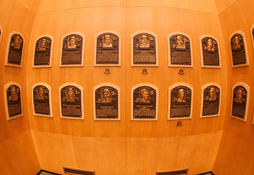 The Hall of Fame Class of 2016: Griffey Jr. and Piazza 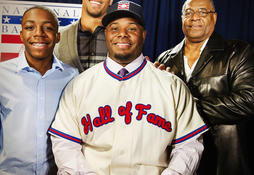 Class of 2016 recalls their fathers’ influence

Griffey, Piazza achieved induction with the help of their dads