By the time Murderer’s Row finished clouting its way through the American League schedule, the New York Yankees appeared ready for new opposition. It would come in the form of the National League’s Pittsburgh Pirates, who won their second pennant in three years. The stage: The 24th World Series.

A memorable treasure from Game 1, the ball struck for the final out, is now part of the Museum’s collection.

Two years earlier in 1925, the Pirates – under manager Bill McKechnie – took a seven-game decision over the Washington Senators in the World Series. Now, led by the Waner brothers, Pie Traynor, and Carmen Hill, Pittsburgh was back in the postseason, but under a new manager, Donie Bush.

The Yankees simply outpaced everyone in the major leagues in 1927. With four hitters driving in more than 100 runs apiece and Lou Gehrig and Babe Ruth combining for 107 home runs, there was just no stopping them. A pitching staff anchored by Waite Hoyt, Herb Pennock and Urban Shocker featured some of the best arms in the game. 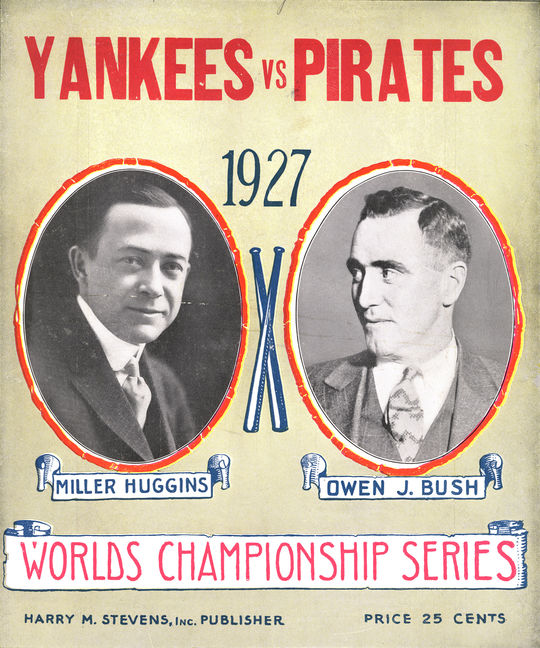 Game 1 of the World Series was slated for Oct. 5 at Forbes Field in the Steel City. Yankees pilot Miller Huggins tabbed Hoyt, his ace, with the start, while Bush countered with Ray Kremer. While Hill led the Pirates with 22 victories and 95 strikeouts, Kremer had the lowest ERA of the Pittsburgh starters and sported a 19-8 record.

The press focused on the composition of the teams’ pitching staffs before the series began. Irving Vaughan of the Chicago Daily Tribune noted that the Pirates’ starters lacked a southpaw and were getting quite overused.

Perhaps this overuse was because the Pirates lacked a deep pitching staff, Vaughan suggested, unlike the Yankees. New York could use the “invaluable” Wilcy Moore or Dutch Ruether. Pittsburgh was “shaded considerably, as Bush owns nobody capable of going in to save mates in distress. Any change he makes to save a game will involve one of his regular men, thus taking something from those who must start the battles,” he explained.

“There is one thing that doesn’t augur well for the Pirates’ chance, and that is that they are without a steady left hander and that their pitchers have had their noses to the grindstone for two months without a letup,” he surmised. 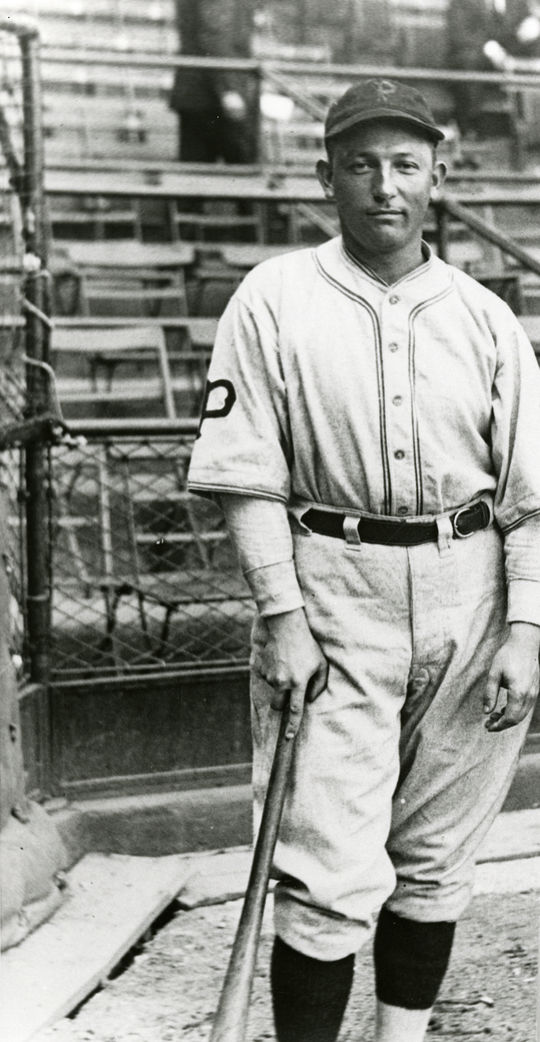 Clyde Barnhart, pictured above, grounded out for the final out in Game 1 of the 1927 World Series. The baseball he hit is currently in the Hall of Fame's collection. (National Baseball Hall of Fame)

Over 41,000 fans filed into Forbes Field for the opener, and for the first time, millions more fans from coast to coast would be able to listen to the World Series on their radios. The National Broadcasting Company announced they would handle the first nationwide broadcast for a World Series, with Graham McNamee describing the action.

Fans at the ballpark and those listening to McNamee over the airwaves would learn that pitching and defense failed the Pirates in Game 1 and that Hoyt was the beneficiary despite allowing four runs on eight hits. Kremer suffered as a result, giving up five runs on five hits in five innings pitched, but his defense did him no favors. The Yankees took the opener 5-4. 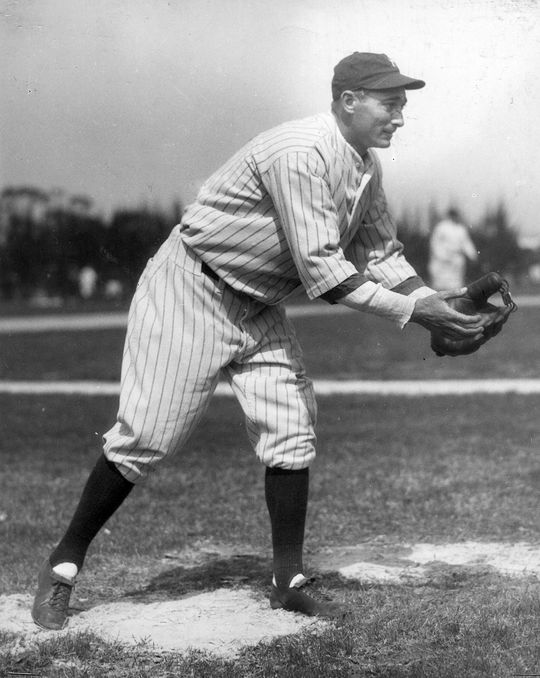 Tony Lazzeri fielded the ground ball hit by Clyde Barnhardt to conclude Game 1 of the 1927 World Series, flipping it to fellow Hall of Famer Lou Gehrig for the final out. (National Baseball Hall of Fame)

“This is supposed to be the age of wallop, but Gene Tunney proved at Chicago that the wallop doesn’t always reign, and the Yankees proved the same thing this afternoon when they were outbatted by a margin of 50 percent and yet won through a stronger, surer defense,” he continued, referencing Tunney’s heavyweight championship fight victory over Jack Dempsey just two weeks earlier.

The third inning proved a costly one for the Pirates, as errors from second baseman George Grantham and catcher Earl Smith led to three Yankees runs. Kremer recovered enough as Pittsburgh chipped away at the New York lead, but a Gehrig sacrifice fly in the fifth was the difference in the final score.

Pittsburgh rallied in the eighth inning, but only pushed one runner across the plate against Moore while leaving two stranded. 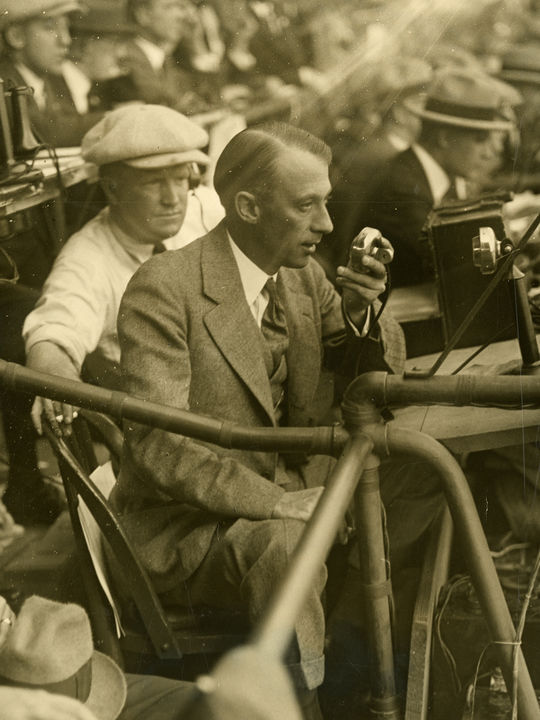 Moore then closed the door on the Pirates with a one-two-three bottom of the ninth, inducing Pittsburgh left fielder Clyde Barnhart into a ground ball for the final out. The ball, with its distinctive red and blue stitching, glanced off Moore’s glove, was fielded by second baseman Tony Lazzeri, and ended up in Gehrig’s mitt.

Today, it is preserved forever in Cooperstown.

The Yankees’ bats awoke from their slumber in the next three matches, shelling the Pirates’ pitching for a total of 32 hits in those games. Moore went the distance in Game 4, as Earle Combs scored on a wild pitch in the bottom of the ninth to give New York its second World Series championship. 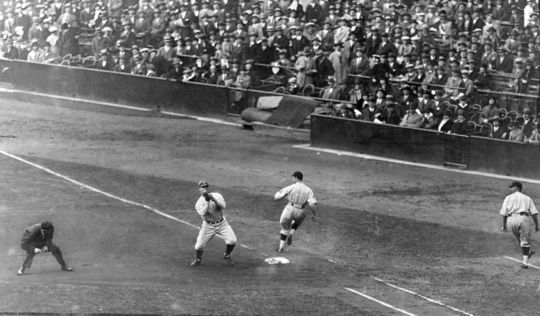