The numbers suggest that third base might be the most demanding position on the baseball diamond.

The numbers also suggest that Ken Boyer played the hot corner as well as it can be played.

Boyer, who played 15 big league seasons for the Cardinals, Mets, White Sox and Dodgers, is one of 10 finalists on this year’s Golden Era ballot that will be considered by the committee on managers, umpires, executives and long-retired players at the National Baseball Hall of Fame and Museum. The 16-person committee will vote at baseball’s Winter Meetings in San Diego, Calif., and the results of the vote will be announced Dec. 8.

The 10 candidates on the Golden Era Committee ballot are: Dick Allen, Gil Hodges, Bob Howsam, Jim Kaat, Minnie Minoso, Tony Oliva, Billy Pierce, Luis Tiant, Maury Wills and Boyer. Any candidate who is named on at least 75 percent of all ballots cast will be inducted in the Hall of Fame as part of the Class of 2015. 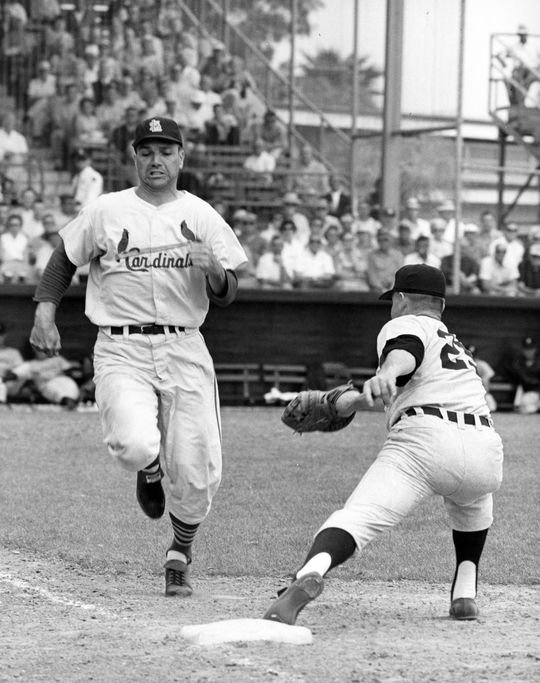 Born May 20, 1931 in Liberty, Mo., Boyer starred as a high school shortstop before signing with the Cardinals in 1949 as an amateur free agent. Boyer’s bloodlines were spectacular: His brothers Cloyd and Clete both played in the majors, and three other brothers also played minor league baseball.

Boyer moved quickly through the Cardinals’ minor league system, but was drafted into the Army in 1951. He was discharged in 1953, and hit .319 for Double-A Houston in 1954.

By the start of the 1955 season, Boyer was the Cardinals’ starting third baseman – and already considered by some writers to be St. Louis’ best third base prospect ever.

“I didn’t like third base at first and I was terrible, too,” said Boyer, who began his pro career as a pitcher before moving to first base and then across the diamond to third. “In fact, I didn’t really begin to improve until… I realized I had spent so much time on hitting that I had neglected my defense.”

In 1957, Boyer played 105 games in center field to help the Cardinals develop other infield prospects, and he led all NL outfielders with a .993 fielding average. But the next year, Boyer was back at third base, where he led the NL in putouts with 156 and captured the first of five Gold Glove Awards. From 1956-60, Boyer led the league each year in double plays by a third baseman, tying a record.

After averaging almost 26 home runs and 98 RBI per season from 1958-63, Boyer had his best year in 1964 – hitting .295 with 24 home runs and an NL-best 119 RBI en route to league Most Valuable Player honors. Boyer powered the Cardinals to the pennant that year, and in the Fall Classic he hit two homers and drove in six runs – including a home run and three runs scored in the decisive Game 7 win over the Yankees.

Only four of the 13 Hall of Fame third basemen who played in the big leagues – Mike Schmidt, Eddie Matthews and George Brett – hit more homers than Boyer.

“I can never be any prouder of another human being (than) the way I was about Ken,” said Clete Boyer. “He was a super athlete and a super brother.”