Today, Latin American ballplayers make up almost one third of all big leaguers.

They can all thank Minnie Minoso, whose talent on the field and courage off it redefined the National Pastime.

“Minnie Minoso is to Latin ballplayers what Jackie Robinson is to black ballplayers,” wrote Hall of Famer Orlando Cepeda in his autobiography. “Minnie is the one who made it possible for all us Latins. He was the first Latin player to become a superstar.”

Saturnino Orestes Armas Minoso, who played for the Indians, White Sox, Cardinals and Senators for 17 big league seasons spanning five different decades, is one of 10 finalists on this year’s Golden Era ballot that will be considered by the committee on managers, umpires, executives and long-retired players at the National Baseball Hall of Fame and Museum. The 16-person committee will vote at baseball’s Winter Meetings in San Diego, Calif., and the results of the vote will be announced Dec. 8.

The 10 candidates on the Golden Era Committee ballot are: Dick Allen, Ken Boyer, Gil Hodges, Bob Howsam, Jim Kaat, Tony Oliva, Billy Pierce, Luis Tiant, Maury Wills and Minoso. Any candidate who is named on at least 75 percent of all ballots cast will be inducted in the Hall of Fame as part of the Class of 2015. 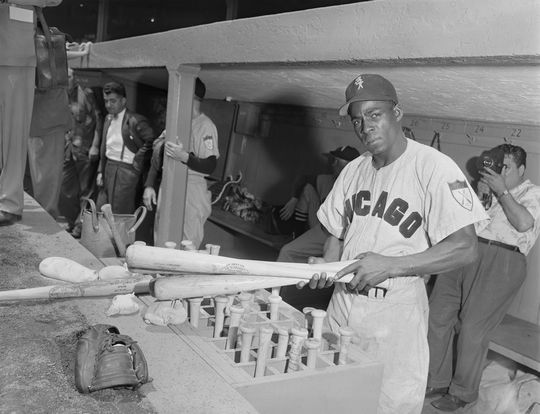 Born in Havana, Cuba on Nov. 29, 1925, Minoso grew up on a sugar plantation, collecting cane during the week and playing ball on weekends. He quickly established himself as a star with Negro league teams like the New York Cubans, but – as a black-skinned Latin American – was denied the chance to play big league ball until Jackie Robinson broke the color barrier in 1947.

Minoso signed with the Indians just before the 1949 season, making his big league debut on April 19 of that year to become the first acknowledged dark-skinned Latin player in big league history. It was in Cleveland where he was first called “Minnie.”

He spent most of the 1949 season and all of 1950 with San Diego of the Pacific Coast League, hitting.339 in the latter season, then played eight games with the Indians at the start of the 1951 season before being dealt to the White Sox in a three-team trade with the A’s.

The White Sox quickly put Minoso in their everyday lineup, where he finished the season with a .326 batting average, 112 runs scored and an American League-best 14 triples and 31 steals. He finished second in the AL Rookie of the Year vote to Gil McDougald of the Yankees, and fourth in the AL Most Valuable Player voting.

Minoso was the first dark-skinned player to appear in a game for the White Sox.

“Chico Carrasquel was already with the White Sox when I got there, so I had somebody I could talk with,” said Minoso of Carrasquel, a Venezuelan of Caucasian descent who spoke Spanish. “It made things a little hard, but as long as I could play baseball in the big leagues, nothing else mattered.”

Minoso quickly demonstrated he could play baseball as well or better than almost anyone else around. Between 1951 and 1957, Minoso led the league in triples three times, stolen bases three times, scored 100 or more runs five times and recorded at least 100 RBI three times. In those seven years, he was named to five All-Star teams, finished in the top 10 of the AL MVP voting four times and won a Gold Glove Award for his play in the outfield in 1957 – the first year Gold Glove Awards were presented.

“I remember my first home run at Comiskey Park; I hit it off Vic Raschi of the Yankees,” said Minoso, whose first home run came on the same day and in the same game as the first home run of future Hall of Famer Mickey Mantle. “But if you ask what was the best day I had in baseball, I would say it was every day I could suit up and play the game.”

The White Sox traded Minoso back to the Indians following the 1957 season, receiving Early Wynn and Al Smith in a deal that would propel the team to the 1959 American League pennant. Minoso hit .302 in both his seasons in Cleveland while averaging 22 homers and 86 RBI per year, then was traded back to the White Sox before the 1960 season. He led the AL with 184 hits in 1960 and won his third Gold Glove Award in the outfield.

Minoso’s average dropped to .280 in 1961, and the White Sox sent him to the Cardinals for the 1962 season. There, Minoso suffered a fractured skull while diving into the Sportsman’s Park wall in pursuit of a ball on May 11, 1962, and appeared in only 39 games that season. He finished his career as a regular player with a stint with the Senators in 1963 and another with the White Sox in 1964.

Minoso, however, continued to play and manage in the Mexican League following his big league career. In 1976 at the age of 50, Minoso appeared in three games with the White Sox when team owner Bill Veeck brought the Chicago hero back to the South Side. Minoso recorded one hit in eight at-bats to become a four-decade player, then became a five-decade player when he appeared in two games for the Sox in 1980 at the age of 54.

Minoso appeared in games in the Northern League in 1993 and 2003, making him a seven-decade pro baseball player.

It was his play on the big league diamond, however, that set Minoso apart. In what amounted to 14 full big league seasons, Minoso hit better than .300 eight times, earned All-Star recognition in seven seasons, captured three Gold Glove Awards and led the league in getting hit by pitches 10 times.