For his first eight full big league seasons, few in baseball could conceive of a better hitter than Tony Oliva.

For his last five years, eight knee operations gradually robbed Oliva of his marvelous skills. But no injury could remove Oliva’s impression from those who saw the left-handed line drive master at his peak.

“He was as good as any hitter of his time… Better,” said Lou Piniella.

Oliva, who played 15 big league seasons for the Minnesota Twins, is one of 10 finalists on this year’s Golden Era ballot that will be considered by the committee on managers, umpires, executives and long-retired players at the National Baseball Hall of Fame and Museum. The 16-person committee will vote at baseball’s Winter Meetings in San Diego, Calif., and the results of the vote will be announced Dec. 8.

The 10 candidates on the Golden Era Committee ballot are: Dick Allen, Ken Boyer, Gil Hodges, Bob Howsam, Jim Kaat, Minnie Minoso, Billy Pierce, Luis Tiant, Maury Wills and Oliva. Any candidate who is named on at least 75 percent of all ballots cast will be inducted in the Hall of Fame as part of the Class of 2015. 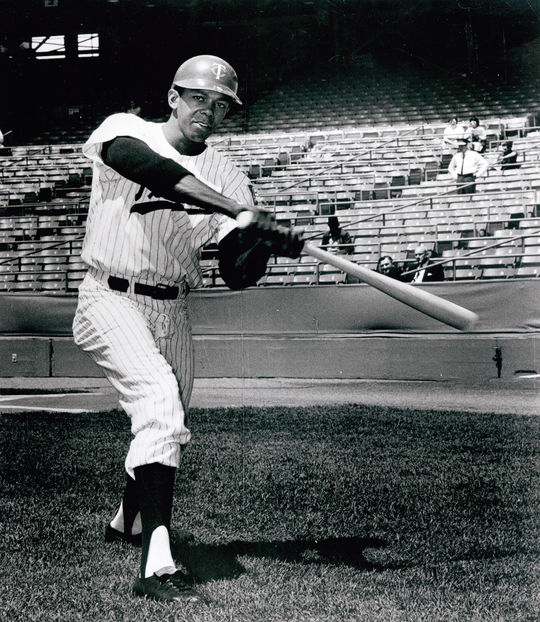 Born July 20, 1938 in Pinar del Rio, Cuba, Oliva was raised on his father’s farm but found time to establish himself as one of the country’s best baseball players. Oliva signed with the Twins in 1960 and came to the United States the following year using his brother’s passport, immediately establishing himself as a big league prospect. He played a handful of MLB games at the end of the 1962 and 1963 seasons before earning a starting job in 1964.

That year, Oliva was the runaway winner of the American League Rookie of the Year after hitting a league-leading .323 with 32 home runs and 94 RBI – to go along with AL-highs in runs (109), hits (217) and doubles (43). His knock-kneed stance and golf-like swing left some wondering how Oliva produced his impressive totals, but Twins owner Calvin Griffith gave his coaches an ultimatum where Oliva was concerned.

“I don’t want anyone to coach (Oliva) in hitting,” Griffth said. “I want him left alone.”

Griffith’s order resulted in another batting title for Oliva in 1965 when he hit .321, becoming the first player ever to win batting titles in his first two seasons. Oliva finished second in the AL Most Valuable Player voting that year, leading the Twins to the AL pennant with 16 homers, 98 RBI and a league-best 185 hits.

“He was one of the best hitters I ever saw,” said former big leaguer Ken Harrelson. “And it was not only what he hit, but when. He always seemed to be getting big hits.”

But in 1971, it was a play in the field that forever altered Oliva’s career. On wet grass in Oakland, Oliva dove for a fly ball and injured his right knee. He finished with season batting .337 – good for his third AL batting crown – then missed all but 10 games the following year while rehabbing the knee.

He returned as a designated hitter from 1973-75, then spent 1976 as a coach/pinch-hitter in his final season. By the end of his career, Oliva’s knee caused him so much pain that he was unable to slide.

“I don’t know if I could have beaten out Rod Carew for any batting titles in (my) last four years,” Oliva said. “But I do know I’d have about 50 more home runs and about 150 RBI.”