For some, a trip to a professional conference can be a chance to mingle with others in the same line of work, exchanging ideas and knowledge or learning about the newest developments.

For one group of librarians and individuals affiliated with the library industry, it’s also an opportunity to talk baseball.

Founded 22 years ago, the Special Libraries Association’s Baseball Caucus meets during the SLA’s annual conference and has grown to 140 active members. Following the organization’s meetings in Boston, 14 members and guests made the four-hour drive to Cooperstown on Thursday, June 18, to visit the National Baseball Hall of Fame and its Library.

As SLA Baseball Caucus Convener, Tony Landolt made arrangements with Hall of Fame Library Director Jim Gates for the group to get a behind-the-scenes look at the Hall’s Library. The members and their guests toured the Giamatti Research Center, the photo archives, manuscript archives, recorded media collection, and took in an artifact spotlight presentation.

“This is our second trip (to Cooperstown),” said Landolt, who works at Reprints Desk, a San Francisco-area document delivery service. “Our first trip was in 2011 when we were meeting in Philadelphia. It was a great tour, and so I called Jim Gates. He said we were more than welcome (to return). It’s a great opportunity for the staff at the Hall of Fame to mingle with other librarians.”

Among the visitors was Laura Bernheim, reference department head at the Waltham (Mass.) Public Library, a member of SLA since 2003, and an avid Red Sox fan.

“I saw there was this group called the Baseball Caucus, and I have to admit, I originally thought it was librarians who worked with baseball,” Bernheim recalled. “I thought, ‘Wow, there’s so many of them.’ It turned out to be an amazing group of librarians who love baseball. I love baseball. I’m a Red Sox fan, but I’m also a fan of the game.”

For Bernheim, whose favorite artifact presented were the batting gloves David Ortiz wore to hit his 400th home run, it was her fourth visit to baseball’s shrine, but she had never before been behind the scenes.

“I’ve always loved baseball because it’s the most literary of all the sports,” she said. “People just wax poetic about baseball in a way they don’t about American football. I think there’s just something very emotional. This exceeded all my expectations.”

Dr. Bill Fisher, Professor Emeritus at San Jose State’s School of Information and a past convener of the caucus, said that the initial interest and following that the SLA Baseball Caucus received took some people by surprise.

“There was a group of us that liked baseball – and we found that out about us by ourselves – and a couple of them were in jobs or business that were baseball statistic oriented, that was kind of justification,” said Fisher, a charter member. “It wasn’t just a group of people that wanted the organization’s official blessing to go out to a ballgame.

“When we did go to our annual conference – since it is in mid-June and the season has already started – if we were in a major league city and the team was in town, we would try to get to a game, informally. Now we can do it a little more formally.”

Fisher told a story about a SLA conference in Cincinnati over 20 years ago where a chance encounter with former Reds owner Marge Schott led to complimentary box seats at Riverfront Stadium. Schott had met the president of SLA, who was a member of the Baseball Caucus, at a reception for local business leaders.

The SLA Baseball Caucus annual meetings often attract a variety of speakers. Fisher noted that Dan Shaughnessy, columnist for The Boston Globe, who spoke at this year’s meeting, brought in a lot of interest from the entire association.

“The room was packed,” Fisher noted. “We had Dan Shaughnessy, and a lot of people who weren’t caucus members but were from the Boston area saw who the speaker was. They came to hear this guy and interact with this guy because they knew who he was.”

In 2000 during the caucus’ meeting in Philadelphia, the speaker was former Phillies relief ace Tug McGraw, who was in town for a 20th reunion of the Phillies’ World Series championship team. McGraw delayed his trip to ceremonies at Veterans Stadium because he was having too much fun with SLA members, Fisher said.

I’m amazed – and continue to be amazed – that 98 percent of the [library collection] is donated. What [the Hall of Fame Library] does with the resources [it has] is absolutely phenomenal.

“Tony (Landolt) had been given marching order from Tug’s wife to get him out of the hotel by a certain time,” recalled Fisher. “The question-and-answer (session’s) going on, and Tony’s trying to cut him off and says, ‘Tug, I told your wife…’ Tug just turns to him and says, ‘They can wait. I’m enjoying myself.’”

It’s just not former ballplayers who enjoy the SLA Baseball Caucus’ company. According to Landolt, authors appreciate the caucus’ knowledge because they “realize it’s just a well-read group of people.” Authors such as John Thorn and Paul Dickson have spoken before the group at past conferences, and Baseball Caucus membership vote for the best baseball book from five to six candidates.

“It makes it a fun experience for the authors because they’re quite surprised and quite pleased that we not only interview a lot of book authors, but it gives them a chance to promote their [work] on our site,” Landolt explained.

But what the SLA Baseball Caucus took away from their visit to Cooperstown is a better understanding of what makes the Baseball Hall of Fame Library unique among institutions.

“I’m amazed – and continue to be amazed – that 98 percent of the [library collection] is donated,” Fisher expressed. “What [the Hall of Fame Library] does with the resources [it has] is absolutely phenomenal.”

I’m a huge sports fan, and I’m also a bit of a sports snob, thinking that baseball is the most intelligent sporting event that’s out there,” he said. “After seeing all those statistics and all the records that are kept, I think most people these days visualize that it’s all done electronically, and it isn’t.

Landolt agreed and added: “I’m always impressed by the way Jim (Gates) runs the staff and the camaraderie of everybody, and the passion of baseball and the fact that you love baseball and you’re librarians. It really all comes together.”

For Demetri Kyriakis, a SLA member from the Morse Institute Library in Natick, Mass., librarians and baseball are a natural fit.

“I’m a huge sports fan, and I’m also a bit of a sports snob, thinking that baseball is the most intelligent sporting event that’s out there,” he said. “After seeing all those statistics and all the records that are kept, I think most people these days visualize that it’s all done electronically, and it isn’t.

“But they have no idea of the history as to how it got there, and I don’t know that football or European football or other sports do the same thing or have the same fascination. It makes sense that librarians are drawn to baseball.” 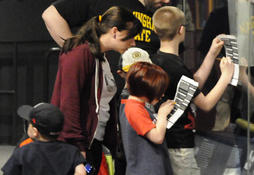 Exploring the role of baseball in society and using the game to learn classroom subjects. 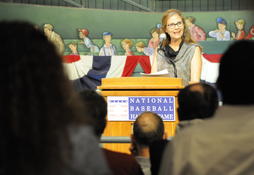