Part of the SHORT STOPS series
Written by: Tim Wiles

It has been said that records are made to be broken. However, some “records” are made not to be broken, but for our listening pleasure.

A great example of the latter kind of records are the approximately 70 baseball songs written and recorded by Terry Cashman, who was honored in Cooperstown as part of Hall of Fame Weekend 2011.

Cashman sang his timeless 1981 hit “Talkin’ Baseball (Willie, Mickey and The Duke)” as part of the Hall of Fame's Awards Presentation on July 23, 2011 at Cooperstown's Doubleday Field.

It was a return to glory for Cashman, who performed the song at the 1982 Induction Ceremony as well, singing in front of inductees Hank Aaron, Happy Chandler, Travis Jackson and Frank Robinson. On that occasion, he also performed a song written specially for the Hall of Fame, called “Cooperstown (The Town Where Baseball Lives).”

“The area is so beautiful, in the summertime and it’s always amazing to me that this place that’s such an homage to baseball exists,” says Cashman. 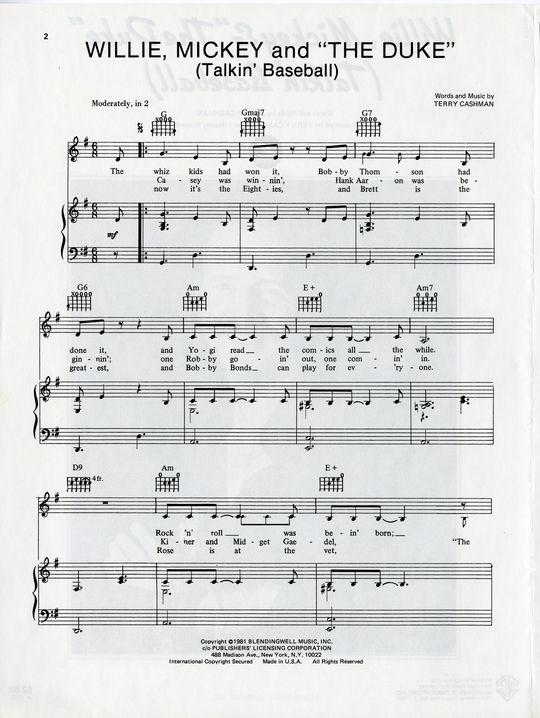 Cashman, born Dennis Minogue, grew up in northern Manhattan on the border between Inwood and Washington Heights and was a Giants fan as a youth. When the Giants moved to San Francisco in his mid teens, Dennis went right with them, only becoming a Mets fan in 1972 when his beloved Willie Mays was traded back to New York.

“Willie Mays was always my favorite player,” he recalls. “But I remember the baseball culture of the time. After dinner, we’d all go stand on the street corner and have a (soda) or an ice cream, get the papers for the box scores, and talk about which of our three teams was the best,” he remembers fondly. Conversation invariably turned as well to which of the three teams’ standout center fielders was the best: Mickey Mantle, Willie Mays, or Duke Snider, future Hall of Famers all.

As a young man, Minogue was pretty talented on the pitcher’s mound. The young righty signed with the Detroit Tigers and pitched in the minors in 1960 before shifting to music exclusively. At the time, he was a member of a Doo-Wop group called the Chevrons, and he even missed their appearance on “Dick Clark’s American Bandstand” because he was pitching at Spring Training.

He made six albums with his folk-rock duo, Cashman and West, and formed his own record company as well. He co-wrote “Sunday Will Never Be the Same,” a top-10 hit for Spanky and Our Gang. He had great success as the producer of classic hits by Jim Croce, including “Operator, (That’s Not the Way It Feels)” “Time in a Bottle,” “Bad, Bad Leroy Brown,” “I Got a Name,” and “I’ll Have to Say I Love You In a Song.”

Inspiration struck one day in 1981, when Cashman was presented with a photograph of four great New York centerfielders: Mickey Mantle, Willie Mays, Duke Snider – and Joe DiMaggio. The men were photographed from behind walking in from centerfield at an Old Timers Game, held in 1979 at Shea Stadium.

“When I saw the photo I said this is just incredible, it captures so much of the history of baseball in New York City, and I started thinking about a song. I kept trying to put Joe in there with Willie, Mickey and the Duke, but it wasn’t really clicking. That’s when I realized that Joe really was before these three guys, who were all great young players at the same time. That’s when I said to myself, ‘My God, It’s Willie, Mickey and the Duke.’ That’s what all the arguments were about, and the idea of these three great centerfielders in New York at the same time – it could only happen in New York because this was the only town with three teams.”

So DiMaggio didn’t make it into the song, but Cashman and his record company still wanted to use the photo on the record sleeve. They sought out Willie, Mickey and the Duke, got permission and paid a royalty, but they never could get in touch with DiMaggio and ended up airbrushing him out of the picture.

After the song’s initial success, Cashman had a chance to meet the three centerfielders. “They were all extremely nice to me and seemed to like the song, and liked being linked to the other two, and so it was great,” he recalls. 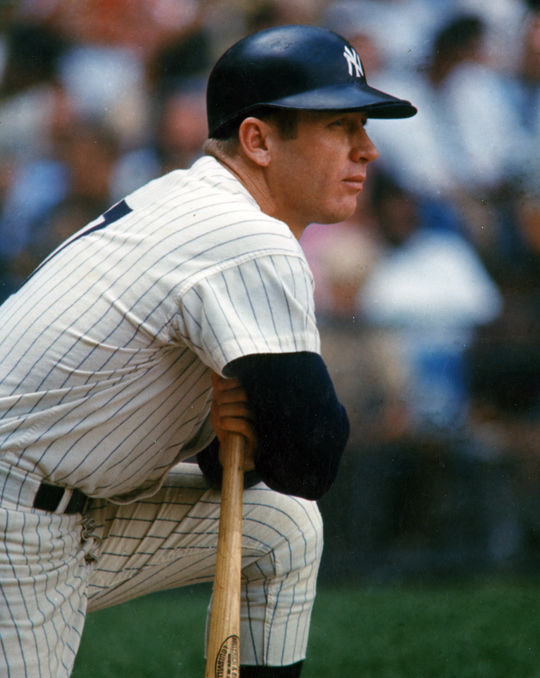 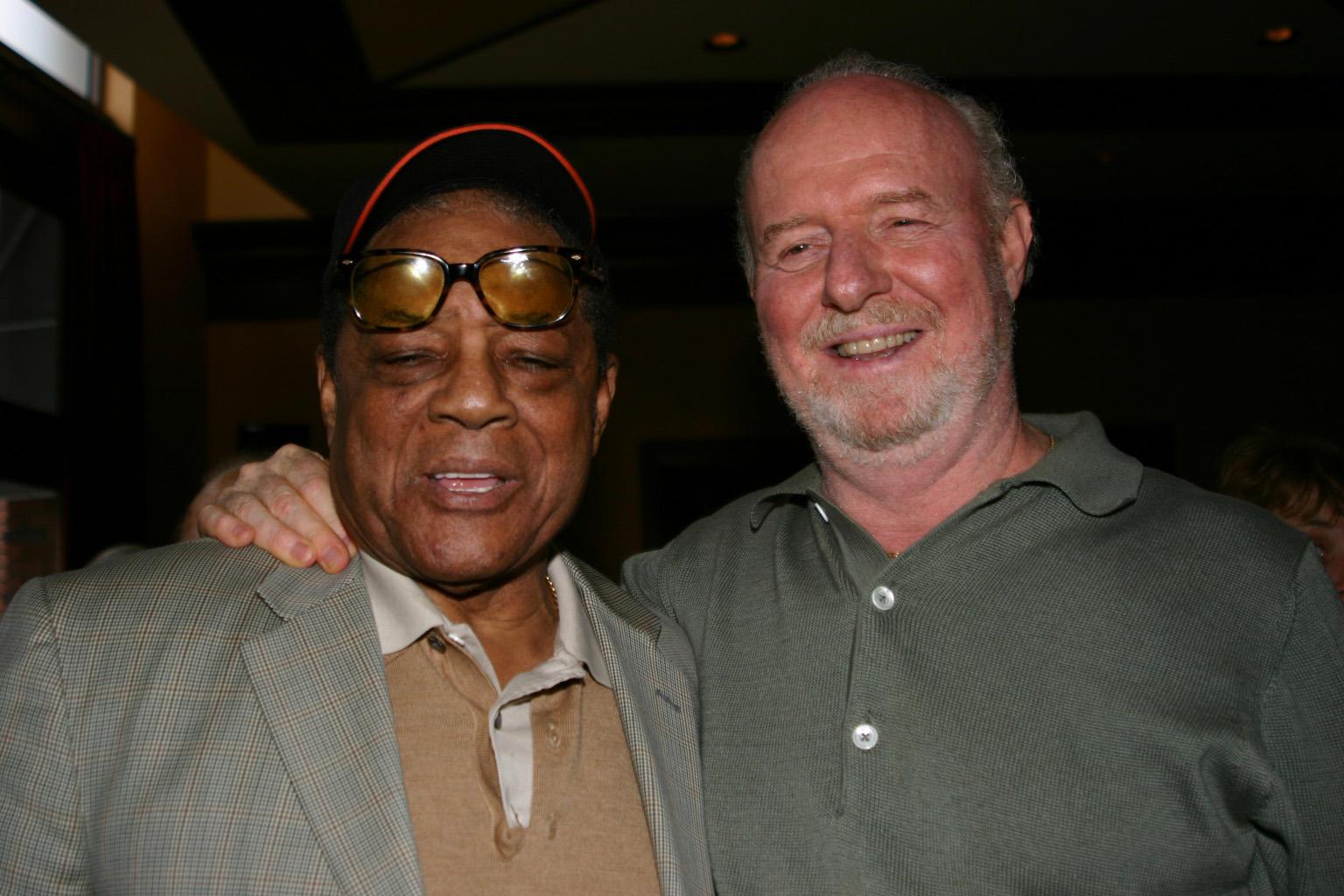 Terry Cashman with Willie Mays in San Francisco in 2004. Cashman was there to perform The Catch, to commemorate the 50th Anniversary of Willie's famous over-the-shoulder catch. BL-204.2011-2 (Laura Fieber-Minogue / National Baseball Hall of Fame Library)

Later he was introduced to Joe DiMaggio, who surprised Cashman by saying “Oh, so you’re the guy who took me out of the picture. That’s OK, I’ve had plenty of songs written about me.” Cashman defused the situation by saying he was working on another song, assuring DiMaggio that he would be very happy with it.

“At the time, I had no idea that I would write ‘Cooperstown (The Town Where Baseball Lives)’ (at the request of former Hall of Fame publicity director Bill Guilfoile.) When I sang both songs at the 1982 Induction Ceremony, with all of the Hall of Famers behind me, I came off the stage and DiMaggio shook my hand and said ‘Now I know what you meant about your new song. I couldn’t believe he remembered the conversation.” The song features the oft repeated line “Ruth, Cobb and DiMaggio.”

The success of “Talkin’ Baseball (Willie, Mickey and The Duke)” was in no small part due to the 1981 baseball strike – just when fans were enduring the first major baseball strike, just after the beginning of the free agent era – as the song harked back to simpler times, when players played ball and kept the business dealings off the sports pages and were seemingly defined by their association with just one team.

Eventually each of the 30 major league teams would ask Cashman to write and record a version of the song specific to the players of that franchise. Cashman has also hit the big time with a parody of his classic. He penned the lyrics to “Talkin’ Softball,” for “The Simpsons” classic episode “Homer at the Bat.” 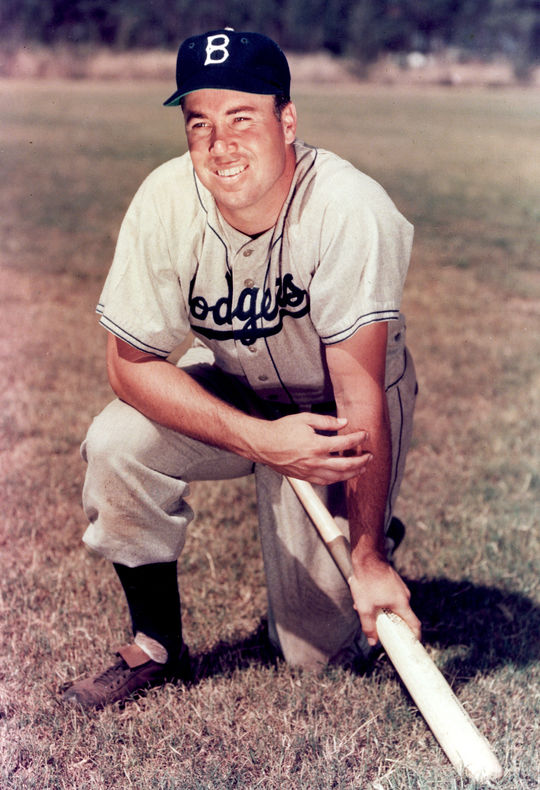 “I was honored and thrilled when they contacted me, and I flew out to California and recorded the song. They tell me it is one of their most popular episodes.”

Cashman has written not just over 30 different versions of the “Talkin’ Baseball’ song, but 40 other baseball songs, on subjects as diverse as Hall of Famers Johnny Bench, Phil Niekro, Babe Ruth, Carl Yastrzemski and Earl Weaver; the Negro Leagues; and even rain delays and third base coaches. He wrote a song to commemorate the 50th anniversary of Bobby Thomson’s 1951 playoff home run and a song about Mike Piazza’s home run in the first New York City baseball game after 9/11. He has also written a song about Ichiro Suzuki and a song called “The Catch” about Mays’ great grab in the 1954 World Series. 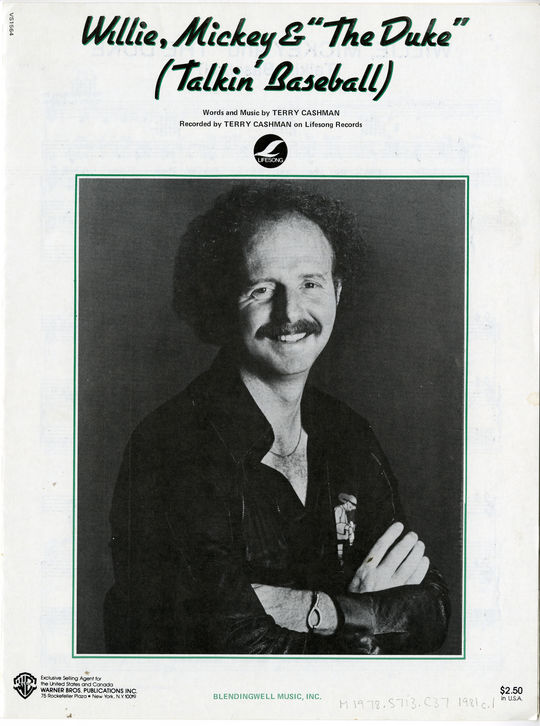 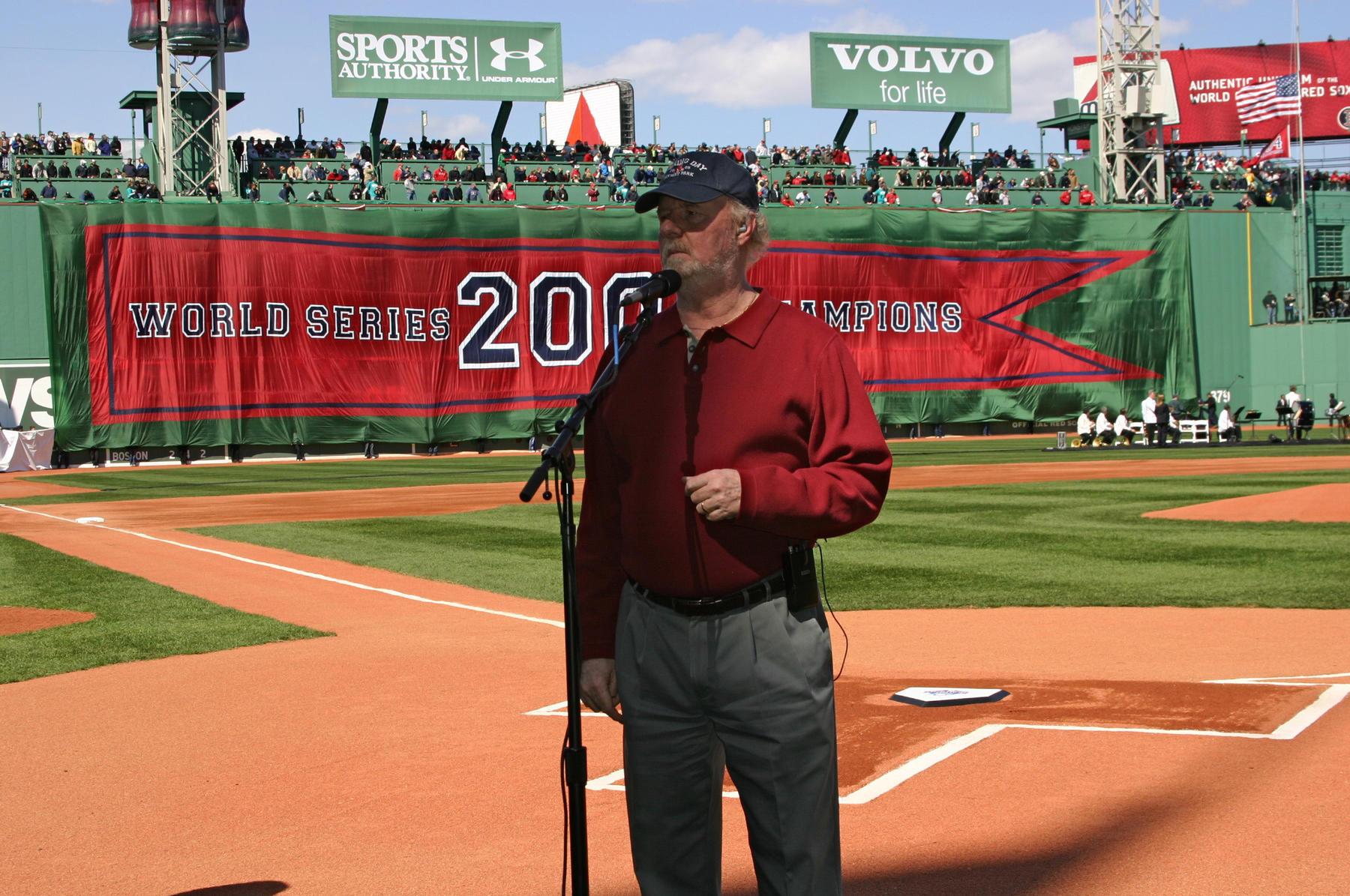 The songs all come out of the folk rock idiom, but there are definite splashes of other musical styles – jazz, blues, country and rock, which are used to perfection to musically illustrate the subject matter.

For example, the Babe Ruth song is inflected with 1920s jazz, and the songs about the Negro leagues touch on jazz and the blues.

One of the Negro Leagues songs, “Now They’re Writing Songs,” is typical of the lyrical sophistication of Cashman’s work – it doesn’t just celebrate the Negro Leagues, but it also asks pointedly why it took us, as a culture, so long to get to this point of celebrating that era.

“‘Willie, Mickey and The Duke’ overshadows all the other songs,” he notes. “But I know that, without trying to sound egotistical, these other songs are good songs, and if people got a chance to hear them, I know they would like them.” 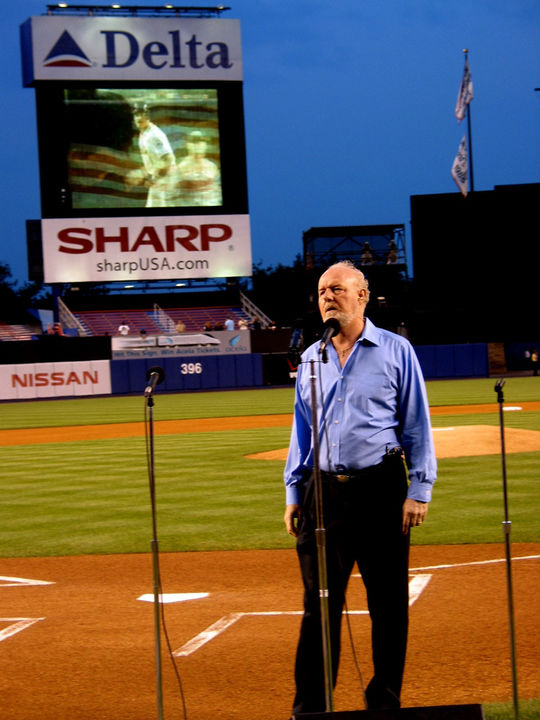 Terry Cashman performing Tattered Flag in the Breeze (Michael's Song), "as a tribute to the healing power of baseball, that began with Piazza's massive home run" at Shea Stadium in 2002, on the first anniversary of the first game played in NYC after 9/11. BL-204.2011.1 (Laura Fieber-Minogue / National Baseball Hall of Fame Library)