Class of 2016 Reflects on Election

Less than a day after Ken Griffey Jr. and Mike Piazza received the greatest news any former ballplayer can get – election to the National Baseball Hall of Fame - two of the greatest players of their generation shared the spotlight and a stage in the Big Apple.

At a mid-afternoon press conference held at the New York Athletic Club in Manhattan on Thursday, Jan. 7, Griffey, the ebullient and joyful center fielder, and Piazza, the rugged catcher with the powerful stroke, spoke with the assembled media about their journey that led them to the game’s pinnacle.

Jack O’Connell, the secretary/treasurer of the Baseball Writers’ Association of American, the organization who announced the duo’s election the previous day, began by talking about how it takes different paths to get to the Hall of Fame in Cooperstown, New York. 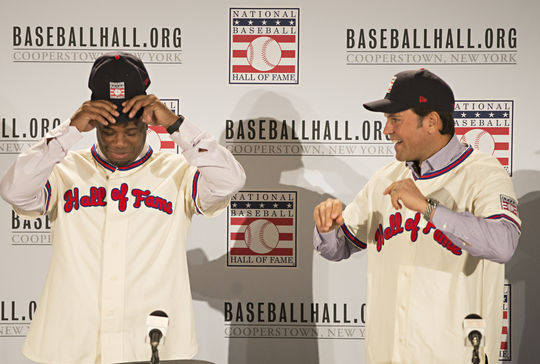 Class of 2016 electees Ken Griffey Jr. and Mike Piazza don the uniforms of baseball's most exclusive team - the Hall of Fame - for the first time on Jan. 7, 2016 at a press conference in Manhattan. (Jean Fruth / National Baseball Hall of Fame)

“In 1987, Ken Griffey Jr. was the first player selected in that year’s first-year player draft. The very next year Mike Piazza was the 1,390th player taken in the draft,” O’Connell said. “Yet here they are today, shoulder to shoulder, heading into the Hall of Fame.”

Hall of Fame President Jeff Idelson put the recent announcement in perspective, explaining that one of the most difficult career paths in the world is to the major leagues.

“In the long first of professional baseball there have been just over 18,500 players who have been privileged enough to wear a major league uniform. And only one percent, one out of a 100, make it to Cooperstown,” Idelson said. “That’s really how special the Hall of Fame election is. And these men here on the dais today are among those select few.

“Gentlemen, you combined to wear the uniforms for eight different teams during your careers and now you’re teammates on the greatest team ever assembled, the Hall of Fame team. And we’re going to give you both lifetime contracts – you’re not going anywhere – and we’re absolutely thrilled to welcome you to Cooperstown.”

It’s something that you can only dream of. I knew I could play baseball but I didn’t know at this level until later in my career what I was able to do. At age 19 it’s pretty much trying to survive day in and day out.

Idelson and Hall of Fame Chairman Jane Forbes Clark would soon outfit the Class of 2016 with their new uniforms – white jerseys with a red-lettered “Hall of Fame” across the chest and blue caps with the Hall of Fame logo in front.

Griffey, whose father ended a 19-year big league career in 1991 after playing alongside his son for two years, was known for his five-tool ability during 22 seasons spent mainly with the Mariners and Reds. With a memorable left-handed swing, he blasted 630 home runs, which ranks sixth all-time, and he still ranks 13th overall in total bases and 15th in runs batted in. A 13-time All-Star, he won game MVP honors in 1992, as well as 10 consecutive Gold Glove Awards and the 1997 American League MVP. 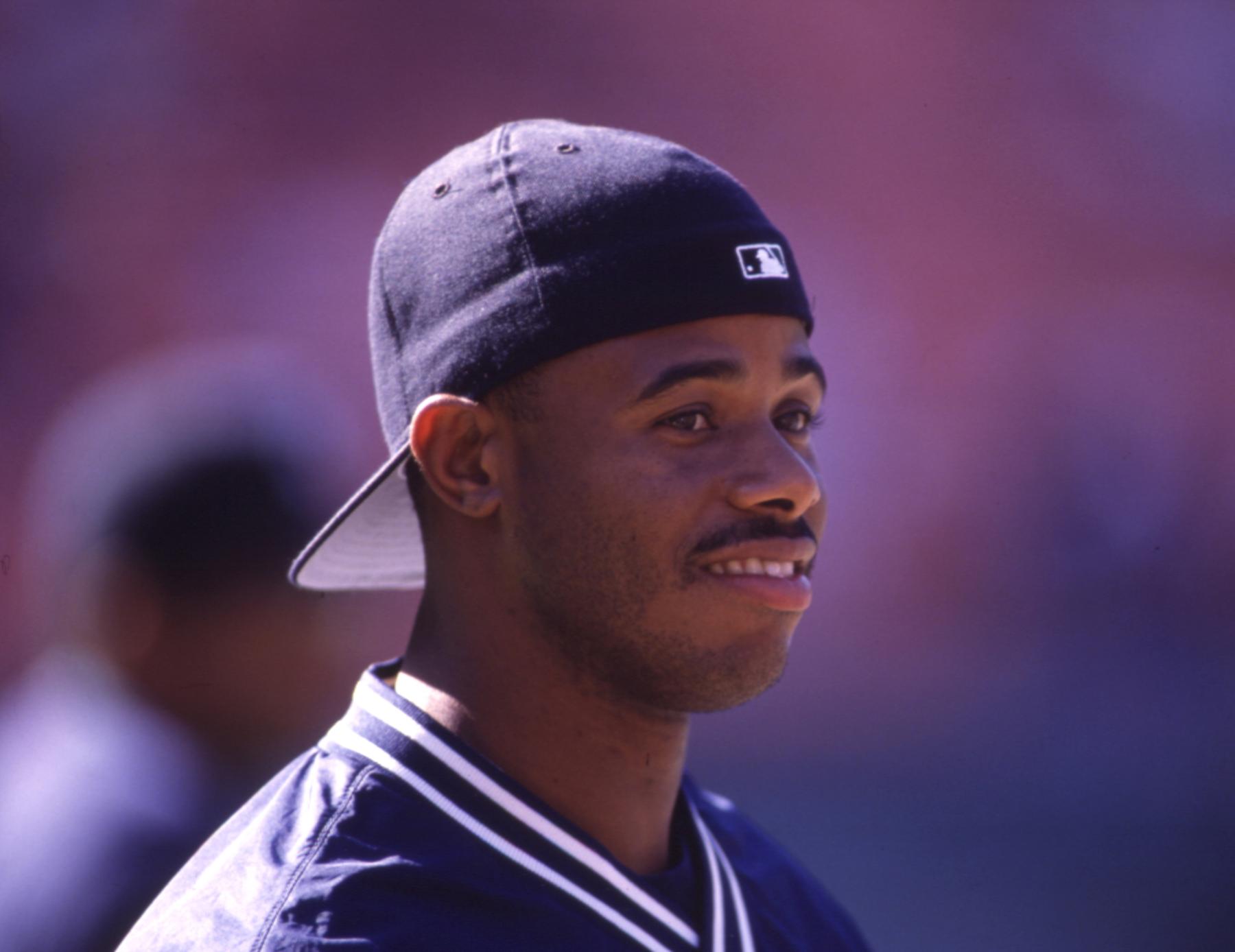 “I’m very honored and humbled by this tremendous … wow,” is how an emotional Griffey began his opening remarks. “It’s something that you can only dream of. I knew I could play baseball but I didn’t know at this level until later in my career what I was able to do. At age 19 it’s pretty much trying to survive day in and day out. As I got older I think I started realizing around 35 my place in baseball.

“He understood the history of the game being 38 or 39 where I was just like, ‘I’m ready to play every day.’ As I got older, I finally understood what I’ve accomplished and what I had the potential to be. Now it’s paid off.”

According to a statement provided by Joe Morgan, who like Griffey is a member of both the National Baseball Hall of Fame and the Reds Hall of Fame, "When I was broadcasting, I made a statement that Ken Griffey Jr. was the closest player I had seen with the skills, pure enjoyment and love for the game that Willie Mays showed. 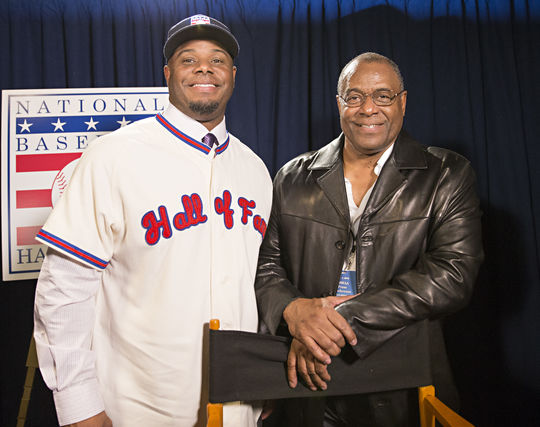 Class of 2016 electee Ken Griffey Jr. poses for a photo with his father, Ken Sr., who was a 19-year Major League player in his own right. The two men became the first father-and-son combo to play on the same team in 1990 with the Seattle Mariners. (Jean Fruth / National Baseball Hall of Fame)

"There was no place he would rather be than patrolling center field and taking his turn in the batter's box. Willie agreed with me."

Piazza set a standard behind the plate, hitting for both power and average by launching 427 home runs, including a record 396 among catchers, while posting a .308 lifetime batting average. An incredibly durable catcher, he led the National League in putouts four times and assists twice. A 12-time All-Star with the Dodgers and Mets, winning the Midsummer Classic MVP honors in 1996, he earned 10 Silver Slugger Awards and was the 1993 N.L. Rookie of the Year.

“First and foremost I would like to thank God for this blessing. I’m really honored. It’s really overwhelming,” said Piazza at the start of his opening address. “It’s so rewarding to be recognized by those who cover the sport and know the gravitas of this Hall and the history of the sport. It’s truly a special club.

“As a young catcher I knew I had a lot of work to do, and I think that speaks volumes about how wonderful this game is, that you have such an amazing, diverse role system that players can find their way in and really, truly make a great living at this sport,” he added. “From me being a student of history, and a student of the sport, this is something truly overwhelming. When you get an honor like this you truly think back from your days in the minor leagues and living with three guys and going to the late-night fast food and all the work and dedication that you do put in. It’s something that brings it all around in focus. It’s something that is very special.”

Piazza also called being elected alongside Griffey an honor. 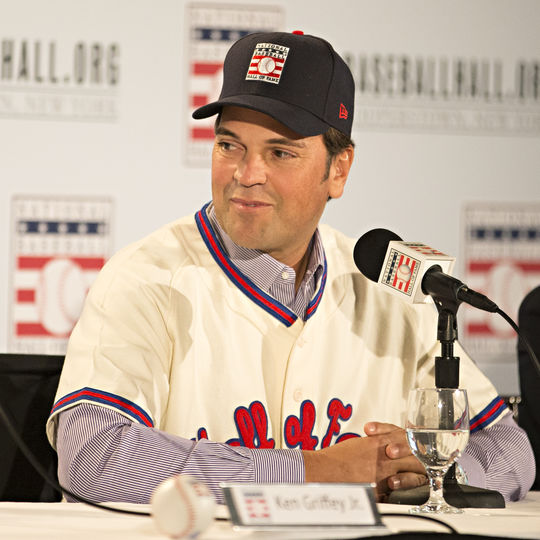 “I remember signing with the Dodgers in 1988 and one of my first games was against the Instructional League team of the Seattle Mariners,” Piazza said. “I remember watching you and being awed by your athletic talent. And I knew that I was the complete polar opposite of you. But I knew I had one thing that I could do – get the bat to the zone and hit.”

The new Hall of Fame electees also made some news when they revealed what team’s cap they would be wearing in the Cooperstown institution’s Plaque Gallery. The plaques will be unveiled Hall of Fame Weekend this summer – Griffey’s bronze likeness donning a Mariners hat and Piazza sporting a Mets hat.

Piazza, who played in just 246 more games for the Mets than the Dodgers, added that his special connection with the passionate New York fanbase was a deciding factor.

“It’s tough. For me, as much as I enjoyed my time there, I ended up in New York and feel like the fans here truly brought me into their family. Every time I’ve come back I’ve been so incredibly honored from the response. Unfortunately, we do have to choose one and for me I always enjoyed reconnecting here in New York.”

Griffey’s options for a plaque cap were simpler, as he played 13 years in Seattle and nine with the Reds.

“I think I did most of my damage as a Mariner,” Griffey said. “I wanted to be the first in a lot of things, and to be able to wear a Mariners hat and be the first Mariner to go into the Hall of Fame as a Mariner, I think that’s also one of the decisions I needed to make. I felt that being 19 they gave me an opportunity to play the game that I love.”

The 2016 Hall of Fame Induction Ceremony featuring Griffey and Piazza will be held on Sunday, July 24. 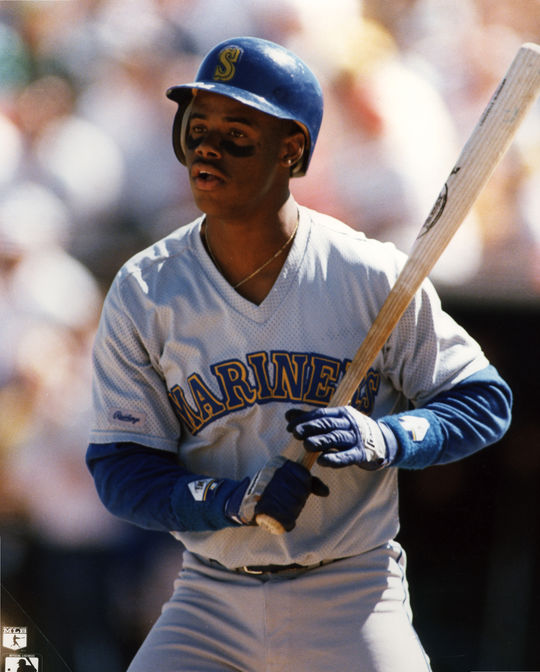 Ken Griffey Jr. was drafted with the No. 1 overall pick by the Seattle Mariners in 1987. BL-774-2002 (National Baseball Hall of Fame Library)