For Hank Aaron, the moment came on April 15, 1947. The moment that he realized that he wasn’t just chasing a pipe dream. Aaron was only 13 years old at the time – seven years away from his Boston Braves debut – but growing up in Mobile, Ala., segregation was all he knew.

“We all knew that Babe Ruth was a great home run hitter and a great player, but what he accomplished was virtually meaningless to black kids,” Aaron told The New York Times. “We paid little attention to the records of white professional players. It wasn’t until 1947 when Jackie Robinson broke the color line that I started thinking seriously of playing Major League Baseball.”

A baseball icon associated with shattering a seemingly unbreakable record, sometimes it bears reminding that Hank Aaron was born into poverty, during the heart of the Great Depression. He was the third of eight children, living in a modest, one-story white house built by his father, Herbert. But Hank himself never needed reminding, as he committed to a lifetime of uplifting children who grew up in circumstances much like he did. And now, after paying it forward for so many years through his Chasing the Dream Foundation, the baseball world will give its thanks in “A Salute to the Life and Times of Henry Aaron,” an event held on Feb. 3, at the Delta Flight Museum in Atlanta.

Proceeds from the event will benefit the Chasing the Dream Foundation, with the intent of funding college scholarships for students in need. To honor Aaron and his philanthropic efforts, the Hall of Fame will send multiple Hank Aaron-related artifacts which were are normally on display in the Museum’s Chasing the Dream exhibit, including the Hall of Famer’s Presidential Medal of Freedom, his 1957 World Series ring, the bat he used to notch his 3,000th hit, and more. The event will also feature the bat and ball Aaron used to hit his historic 715th home run, currently on loan from the Atlanta Braves.

“As a Hall of Famer on the field, Henry Aaron changed the game with his incredible ability and consistency,” said Erik Strohl, vice president of exhibitions and collections at the National Baseball Hall of Fame and Museum. “But his work off the field in support of his community and society have left a legacy that is unparalleled. We are honored to present these historically important treasures, which have never before been exhibited together outside of Cooperstown.” 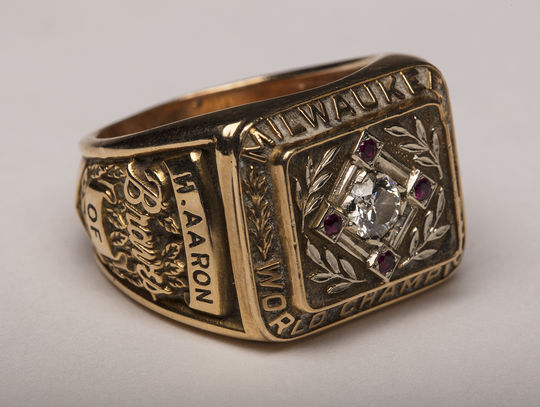 Hank Aaron batted .393 during the 1957 World Series against the New York Yankees. The Milwaukee Braves took the series in seven games. Aaron's World Series ring, pictured above, is currently on display at “A Salute to the Life and Times of Henry Aaron,” in Atlanta. (Milo Stewart Jr. / National Baseball Hall of Fame) 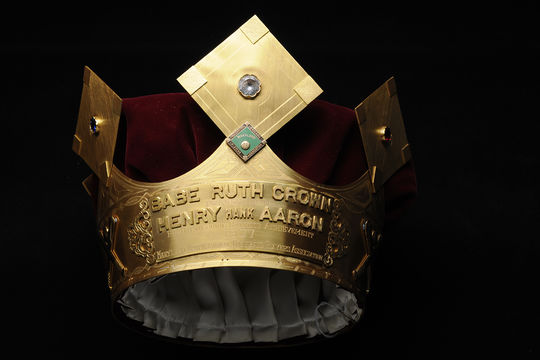 This Babe Ruth Crown was awarded to Hank Aaron for his career hitting achievements by the Maryland Professional Baseball Players Association in 1977. (Milo Stewart Jr. / National Baseball Hall of Fame) 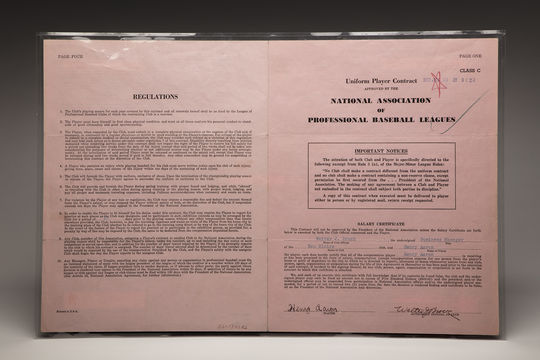 Bringing these artifacts more than 1,000 miles south of Cooperstown to Atlanta, event participants will be able to experience Aaron’s career in full – from his start in the minor leagues to his 715th home run. The Hall of Famer’s philanthropic accomplishments will be celebrated in equal part. His Chasing the Dream Foundation, which was founded in 1994, began with the goal of awarding 755 scholarships to underprivileged students – a tribute to Aaron’s 755 career home runs. But it has since surpassed that number, providing more than 1,000 students with financial assistance. 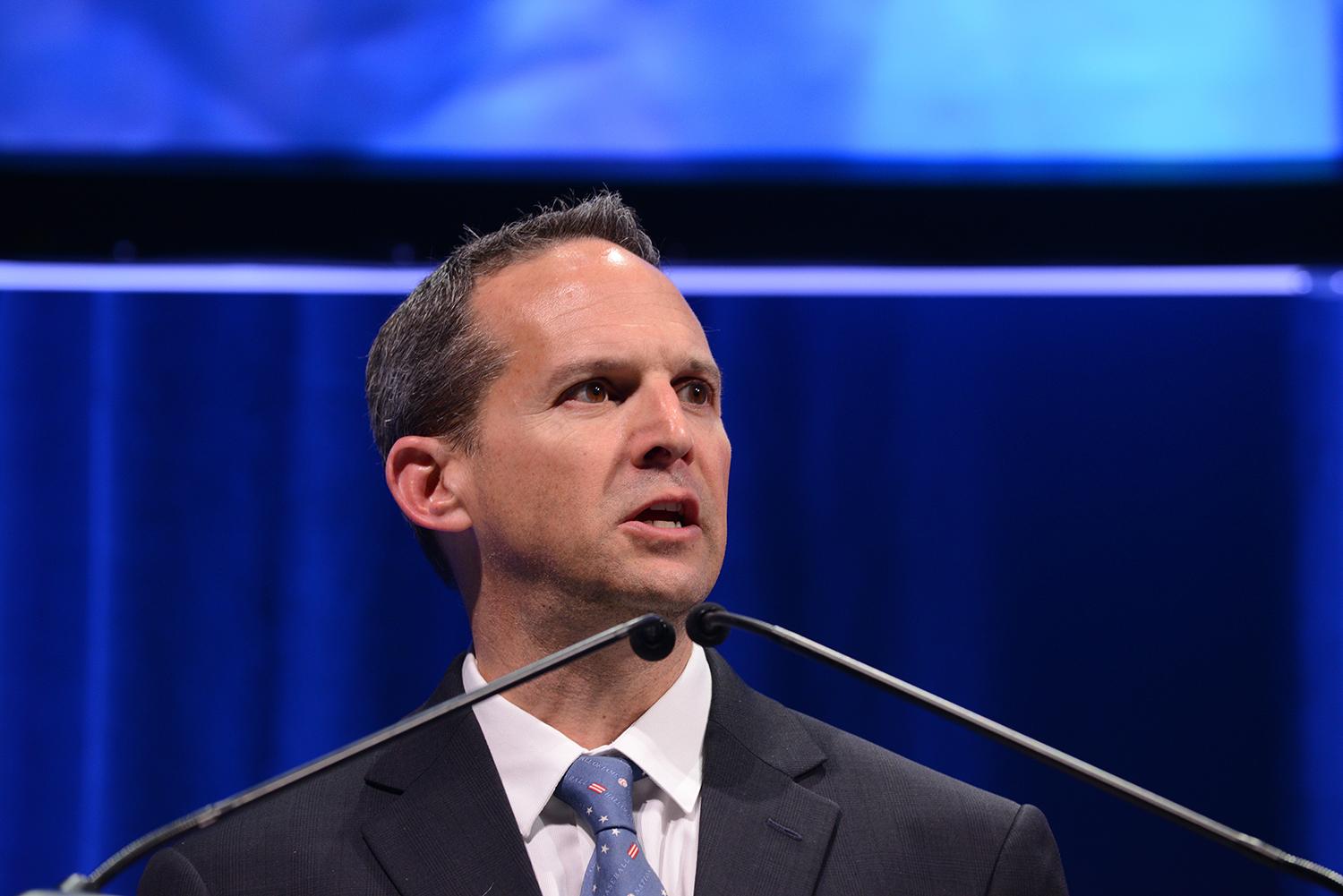 Hall of Fame President Jeff Idelson speaks at “A Salute to the Life and Times of Henry Aaron," benefiting the Hall of Famer's Chasing the Dream Foundation. (Images by Caselove Productions)

“Our intent was to encourage youngsters to dream a dream and then do what we could to help that dream take root and grow,” Billye Aaron, Hank Aaron’s wife, said while speaking at Tuskegee University in 2003. “Henry had the feeling that we need to reach youngsters at an early age before their attention is diverted by the communities in which they live. If they focus, if they have talent, they can certainly achieve. If they do not become stars, they can certainly become good citizens.”

Aaron hopes that at the end of the day, what he has accomplished on the field and through his Foundation can provide a message of hope.

“African-American kids need to know that anything is possible,” Aaron said to The New York Times. “Not just becoming a home run king, but maybe even becoming a president. That’s the message we’re trying to convey with the Chasing the Dream Foundation.” 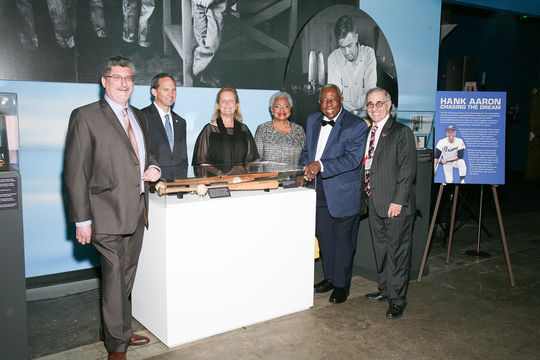 Hank and Billye Aaron (second and third from right) pose with various artifacts from the Hall of Famer's career, at “A Salute to the Life and Times of Henry Aaron." From left to right: Hall of Fame Vice President of Exhibitions and Collections Erik Strohl, Hall of Fame President Jeff Idelson, Hall of Fame Chairman of the Board Jane Forbes Clark, Billye Aaron, Hank Aaron and Allan Tanenbaum. (Images by Caselove Productions) 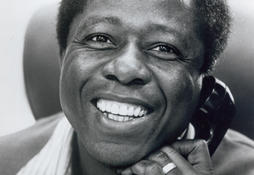