Chip off the Block

Part of the SHORT STOPS series
Written by: Lenny DiFranza

On April 24, 1960, a small crowd gathered in Brooklyn to mark the demise of Ebbets Field with a one-of-a-kind event. During an auction of baseball memorabilia spanning the ballpark’s history, the auctioneer presented the building’s cornerstone – but it was only a prop, used for a mock explosion to reveal five circus clowns dressed in Dodgers uniforms. Later the real cornerstone was sold in this memorable final act for the beloved ballpark.

The Brooklyn Dodgers called Ebbets Field home for 45 seasons before moving to Los Angeles after the 1957 season, and held the lease to the park for two more years. Demolition of Ebbets Field began in February of 1960, to make way for an apartment building complex that still stands in Flatbush.

Kratter Corporation, which owned Ebbets Field and everything in it, razed all but the ballpark’s outer walls and ticket rotunda. Before finishing the job, the company decided to auction off a large collection of salvaged items. The Brooklyn Dodgers’ diehard fans were clamoring for mementos of their favorite ballpark and their dear departed “Bums.” 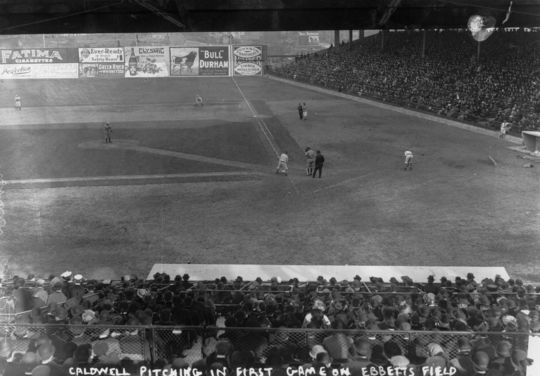 The first game at Ebbets Field took place on April 9, 1913, the year after the cornerstone and time capsule were placed in the ballpark’s foundation – BL-10457-94 (National Baseball Hall of Fame Library)

Writers estimated the crowd on that April day to be as low as 100 and as high as 1,000. Auctioneer Saul Leisner hawked items including broken bats, bleacher seats, autographed balls, gold-painted construction bricks, ushers’ caps, flagpole banners, and photos of treasured heroes. Everything was sold at bargain prices; most for less than $5. Flower pots filled with infield dirt were distributed for 25 cents, and some were just given away.

Leisner finally revealed the ballpark’s cornerstone, a granite block that had been set into the rotunda’s wall on January 5, 1912. It was an imposing stone, measuring four feet by three feet and one foot thick. “Here it is, ladies and gentlemen,” the auctioneer shouted. “This is gonna be the official opening of the cornerstone.” 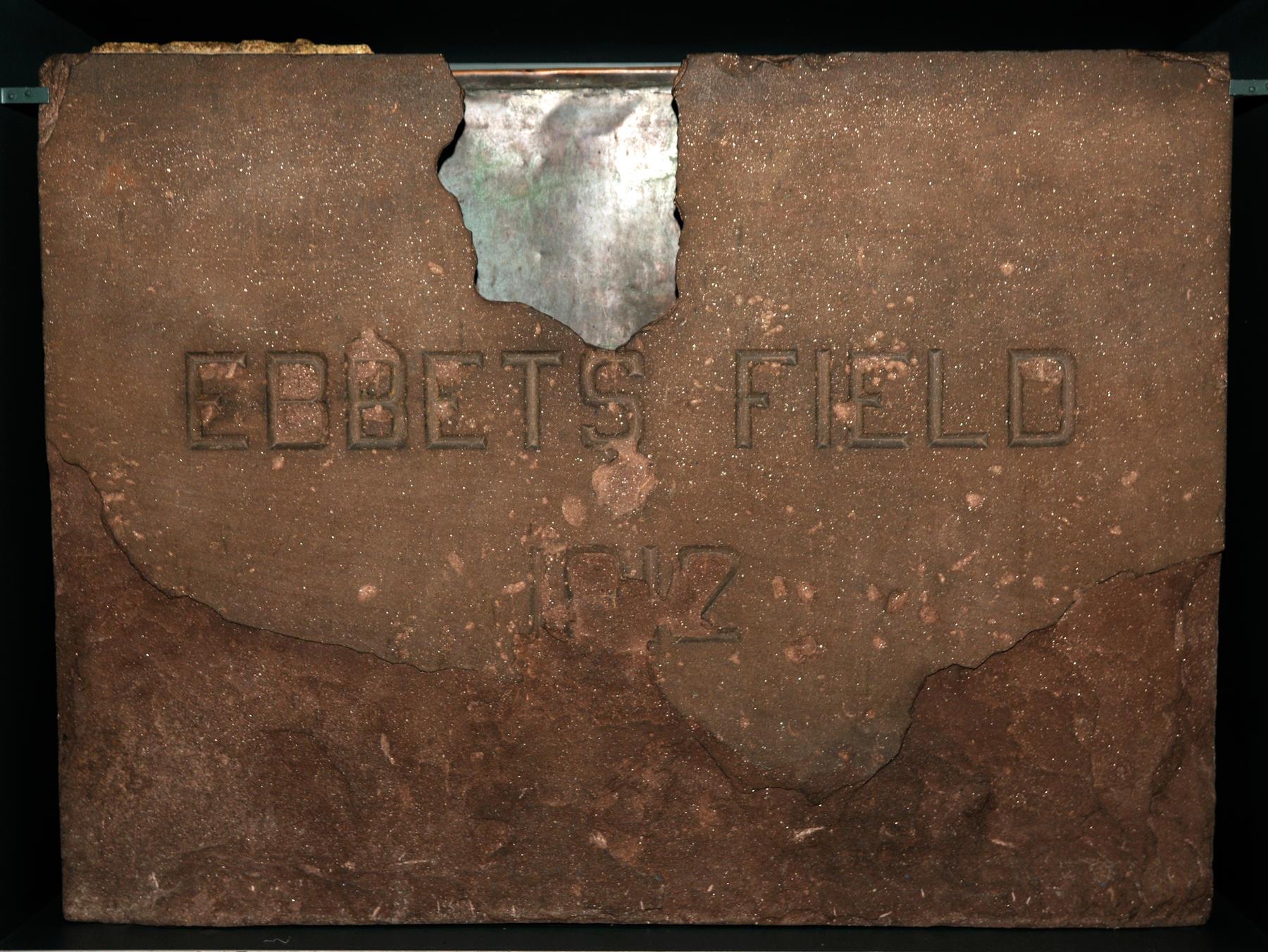 Ebbets Field’s cornerstone is on exhibit at the Hall of Fame – B-35-60 (Milo Stewart, Jr. / National Baseball Hall of Fame)

He was referring to opening a time capsule hidden within the stone. Edward A. Duval, a city worker who remembered when the ballpark opened, said that special items were placed inside the cornerstone in 1912. Without his memory, the hidden collection would have been lost to history.

The bidding started at an amazing $600, the amount that National League President Warren Giles had arranged to offer for the cornerstone, though he did not attend. No one offered more, so it was his.

It was time for the day’s climax, the opening of the capsule. Seymour Goldsmith, Kratter Corporation vice president, took possession of a handy sledgehammer and struck the cornerstone, but could not crack it. He tried again – no luck.

Finally, construction worker Maxie Rosenfeld took his turn. It required some hard labor, but he was able to break a large hole into the stone. His coworkers helped him to remove a large copper box and pry it open. 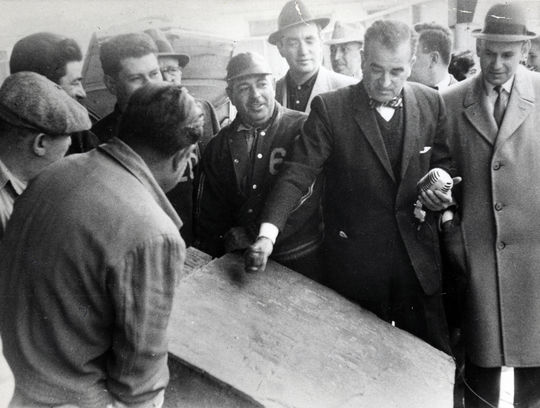 The Associated Press reported the contents: “A picture of Charlie Ebbets, president of the Dodgers when the park was built; letters from baseball greats congratulating the team on its new park; a copy of Adm. Peary’s message to America that he had reached the North Pole; a copy of the old New York Morning Post of Jan 5, 1912; five 1912 pennies and one 1811 penny, now worth about $7.50.”

In fact, the many paper items fell victim to time and the elements. They quickly turned to dust as the crowd inspected them.

In all, an estimated $2,300 changed hands. Giles shipped the cornerstone containing the empty copper box to the Hall of Fame where it was installed a few weeks later. Currently displayed in the Museum’s Sacred Ground exhibit, the granite stone has now lived in Cooperstown longer than it did in Brooklyn.

Ebbets Field’s cracked cornerstone is a symbol of the fabled ballpark and the unforgettable 45 years of baseball it hosted. It is among the rare artifacts in the Museum that visitors are allowed to touch. 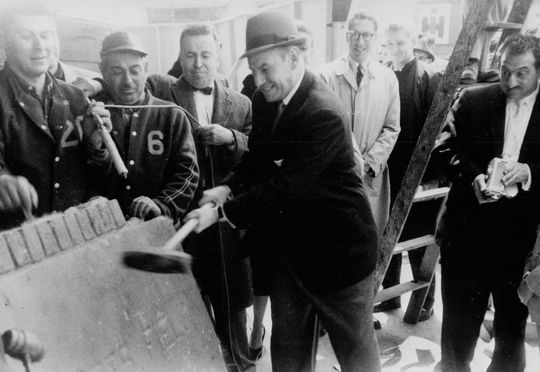 More From the Collection