For 2020 and 2021, PWCC, a sponsor of the Hall of Fame’s Shoebox Treasures exhibit, has loaned the rookie cards of 14 Black Hall of Famers, honoring these pioneers who changed our National Pastime forever.

When visitors come to Cooperstown to see the exhibit and the “From the PWCC Vault” baseball card drawers, they will see some of the game’s greatest postwar players as they were first introduced to card collectors from 1949 to 1961.

As a bonus, these examples also show how quickly the design and appearance of cards evolved during the era, suggesting why collecting baseball cards became such a passion in an age of otherwise black and white media. Finally, the cards illustrate how graphic designers took the basic elements of the cards and converted them into treasured time-capsules that carried on for generations of youths.

Following the end of World War II in 1945, baseball – in a reflection of American society – evolved through a number of fundamental changes. Chief among these was the breaking of the game’s long-held color line. The Pittsburgh Courier’s Double V campaign, promoting victory abroad against the Axis powers abroad and full rights for Black Americans at home, had raised the profile of inequality in a new and powerful way.

The end of WWII also permitted the American economy to begin reopening. War rationing and restrictions ended, and resources began flowing back toward their peacetime markets. The term “a return to normalcy” may have been coined after the First World War, but the sentiment was certainly reflected by the Bowman Gum Company, which in 1948 became the first company to resume issuing baseball cards on a national basis.

In 1945, Jackie Robinson played his only year in segregated baseball, starting at shortstop for the Negro American League’s Kansas City Monarchs. A year later, he broke the minor league color line with the Montreal Royals, Brooklyn’s top-level minor league entry in the International League. He then shattered baseball’s Black ceiling for good in 1947, and was joined in the big leagues later that same season by Larry Doby, Hank Thompson, Willard Brown and Dan Bankhead. A year later, Roy Campanella and Satchel Paige made their major league debuts.

Bowman had first made its trading card presence known in the 1930s, and from 1939 through 1941 produced the celebrated Play Ball set. Bowman’s first postwar set was the 1948 issue, a black and white, 48-card edition that failed to include any of the above-named players, despite Robinson’s breakout 1947 season that culminated in his earning the first-ever Rookie of the Year Award. 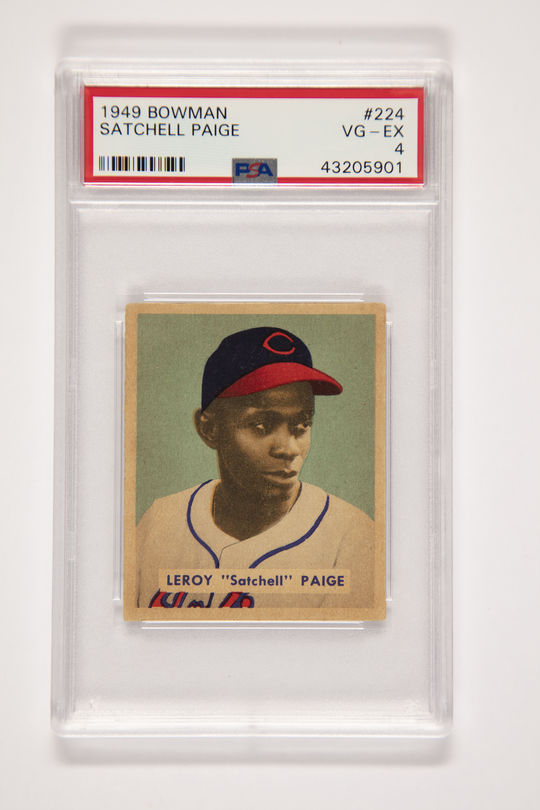 Having satisfied itself that the market was strong enough to resume production, Bowman issued its much more engaging 1949 semi-color set of 240 players, which included future Hall of Famers Jackie Robinson, Doby, Campanella and Paige. Measuring just 2 1/16 x 2 1/2 (compared to the modern industry standard of 2 1/2 x 3 1/2), these nearly square cards packed a little more punch by including spot color in the background, team color on the jerseys and caps, and, for the first time, a few Black players.

Among the PWCC cards in the Shoebox Treasures exhibit are the 1949 Bowman issues of Jackie Robinson and Larry Doby, integrators of the National and American Leagues, respectively, and their 1948 teammates, Roy Campanella and Satchel Paige.

The rookie cards of Willie Mays and Monte Irvin highlight Bowman’s larger (2 1/8 x 3 1/8), full color 1951 set. The images themselves were based on black and white photos, which were then colorized and reproduced. Like most of the early Black major leaguers, both Mays and Irvin began their careers in the Negro Leagues. Through the scouting efforts of Hall of Famer Alex Pompez, a long-time Negro League executive and scout, both landed in Manhattan with the New York Giants. 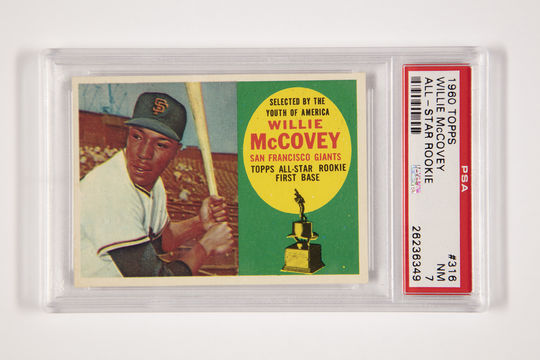 After Topps debuted with a poorly received 1951 black and white set, the famed Sy Berger assumed production in 1952 and, together with art director Woody Gelman, revolutionized the industry. By 1954, Topps had created a novel two-image front, featuring a large full-color player portrait with a smaller overall black and white action shot. Berger also improved upon design elements from 1952 and 1953: a team logo and the player’s position and signature. Together, the features give collectors a lot to enjoy on the front, and the backs are engaging, too. Personalized cartoons replaced trivia questions of 1953, and together with a detailed bio, gave a real feeling of connection with the players. The current PWCC loan includes the 1954 Topps cards of both Hank Aaron and Ernie Banks, two MLB rookies poised for a breakout, although both had already cut their pro baseball teeth in the Negro American League.

Topps marked Roberto Clemente’s rookie year with the horizontal 1955 issue, which took the 1954 design and turned it on its side. The 1955 issue kept the larger size (2 5/8” by 3 ¾”) of the previous three years, giving the design elements just a little more breathing space. It is sometimes forgotten that Clemente started off slowly (at least compared to the vast majority of his career). A quadruple combination of youth, language barrier, racial tension and the lingering effects of a 1954 traffic accident have all been cited as reasons for his uneventful start, but he ultimately overcame every obstacle. The 1955 issue also marked the end of Bowman; Topps bought out the venerable brand before the next season, beginning a quarter-century of an effective baseball card monopoly. 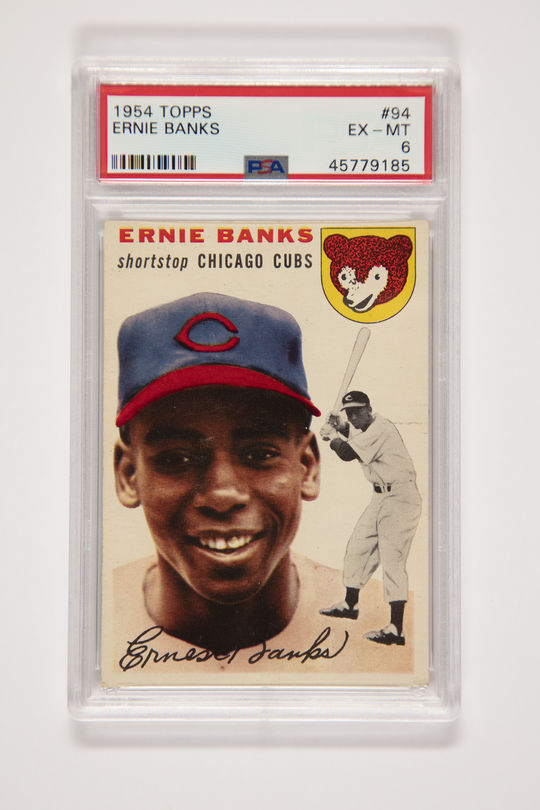 The unanimous 1956 NL Rookie of the Year Award winner, and the only player to win the Most Valuable Player Award in both leagues, made his baseball card debut in 1957: Frank Robinson. The slightly smaller 1957 issue was the first to measure the now standard 2 ½” x 3 ½” size. Possibly in light of the new size, Topps opted for a simpler design, leaving only the player’s name, team name, and an abbreviated position on the front. Topps made the most of Robinson’s image, however, giving collectors a great shot of his confident, off-camera look and the classic Cincinnati vest.

Question: When does Bob Gibson smile? Answer: Only when he’s not on the mound. Gibson is recognized as the top rookie in the 1959 Topps set, which featured an entirely new design. Topps placed the player’s image and signature in a cutout circle, surrounded by a solid colored border. With the player’s name set at an angle in bold, lower case typeface, and the logo, team name and player position on the bottom, collectors got the equivalent of a matted and framed signed portrait for a penny. Quite a bargain! 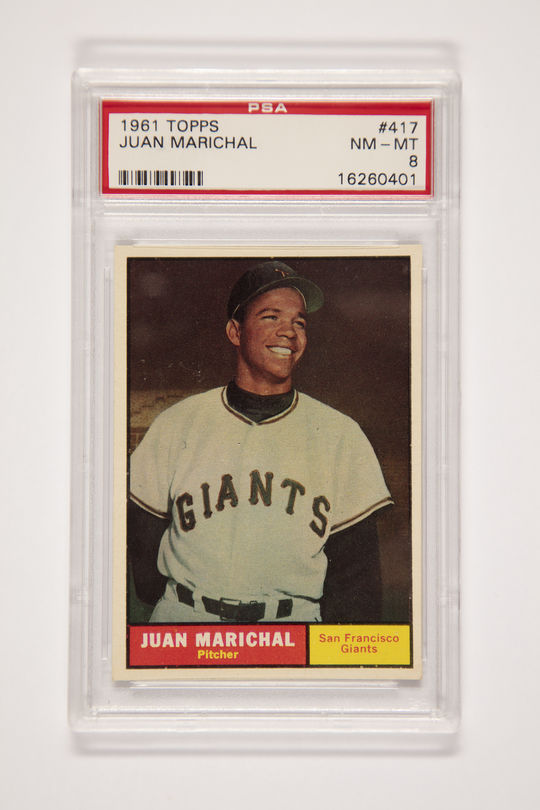 In 1960, Topps returned to the horizontal well one last time with a larger color portrait, a smaller full-length black-and-white picture as a secondary image, and the now-famous multi-colored player’s name. Giants first baseman Willie McCovey made his baseball card debut that year with the inaugural Topps Rookie trophy, awarded to him based upon his stats from the previous season.

The 1961 issue marked the card debuts of two more Black ballplayers who would eventually make the Hall of Fame, Juan Marichal and Billy Williams. The cards themselves are understated in design, providing lots of real estate for the smiling Dominican Dandy and the intense, sweet-swinging Williams.

As was so often the case back in the day, neither player was in his first year when he got his first card; Topps had to determine that you were likely to be called up and stay up before immortalizing you in cardboard. 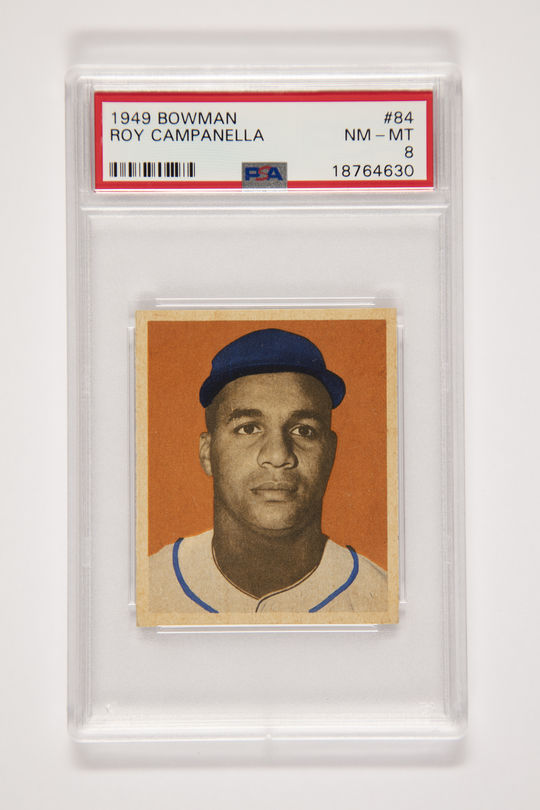 Marichal was in his second year with the Giants, and had clearly played himself into the starting rotation. Although he was entering his third major league season, Williams had played so sparingly for the Cubs in 1959 and 1960that he retained his rookie eligibility for 1961. As a technical rookie with some big league playing time, Topps gave Williams the baseball card nod for this campaign, complete with the rookie star icon in the corner. Williams made the best of his first real playing time, winning the NL Rookie of the Year over Joe Torre. 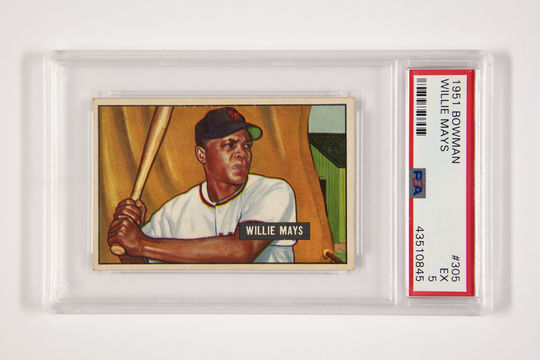 In 1961, baseball had been integrated for 15 seasons, but the rest of America wasn’t yet. Spring Training sites still practiced housing and dining discrimination, and players later recalled that teams often just happened to have an even number of Black players, ensuring they could room them together.

To the betterment of baseball, more great Black ballplayers were on the way and would be featured in upcoming Topps card sets. 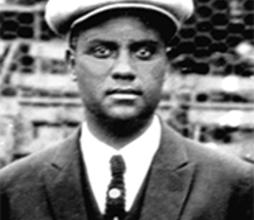 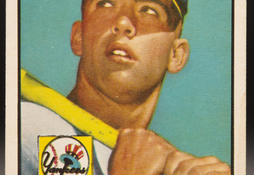 The Hall of Fame collection features some of the most unique cards of all time, many of which are featured in Shoebox Treasures. 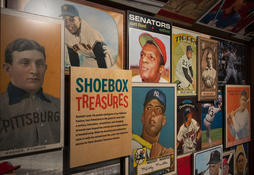 The Hall of Fame's Shoebox Treasures exhibit opened on May 25, 2019. 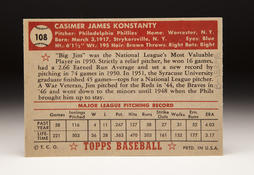