He was so easily identifiable that no sleeve number was even necessary.

The silver hair, the methodical-yet-authoritative signals. A presence that earned him the nickname “god.”

“You always respected him because he came out to his job and (did it) with a lot of class,” said Dodgers manager Joe Torre, who – in Harvey’s rookie season of 1962 – became the first player ejected by Harvey. “He was very consistent, and that’s the highest compliment you can pay anybody.”

Born March 13, 1930, in South Gate, Calif., Harvey did not umpire a game until he was 16 years old. But three years later, Harvey was asked by his father – an alternate umpire in the Class C Sunset League – if he wanted to work a series of games in Mexico. Thirteen years later, Harvey began a 31-year career in the National League when he worked third base in the Reds’ 6-3 win over Los Angeles at Dodger Stadium.

The home plate umpire that day, Al Barlick, is one of the nine other men enshrined in the Hall of Fame as umpires – and a man Harvey cited as one of his biggest influences.

But it was another Hall of Fame umpire – Jocko Conlan – who made the biggest impression.

“I’ve got a photograph of Jocko Conlan working first base,” Harvey told writer Jerome Holtzman, the 1989 winner of the J.G. Taylor Spink Award. “Jocko’s arm was extended in the out call. But the runner was still short of the bag, and the ball was still in flight.

“In those days, it was common to anticipate the call. Everything was called too quickly.”

Harvey worked 4,673 games during his 31 years in the big leagues, including nine National League Championship Series, five World Series and six All-Star Games. He served as a crew chief in 18 of his seasons.

“This much is indisputable: Harvey is one of the best umpires the game has seen,” wrote USA Today’s Hal Bodley in the fall of 1992 – one of several national columnists to laud Harvey as he wrapped up his career. “He’s a Hall of Famer, period.” 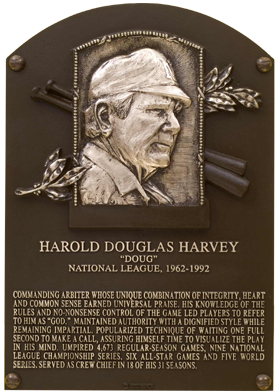 that Doug Harvey was a referee in the American Basketball Association from 1967-69?

More info on Doug Harvey
Retrosheet.org
"You always respected him because he came out to his job and (did it) with a lot of class. He was very consistent, and that’s the highest compliment you can pay anybody. "
Hall of Famer Joe Torre 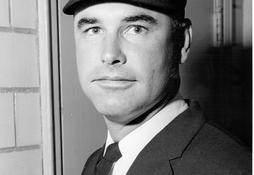 The ability to focus on the present made Doug Harvey one of baseball’s best umpires – and eventually took him to Cooperstown.
Explore more Inductees