Nestor Chylak recovered from a World War II accident that nearly rendered him blind to become the model umpire of the post-war era.

Chylak, a son of Ukrainian immigrant parents, was serving in the United States Army during the infamous Battle of the Bulge when he was wounded by shrapnel from an exploding shell. He was hospitalized for eight weeks with bandages over his eyes before recovering with his eyesight intact. He was later awarded both the Silver Star and Purple Heart for his courage in battle.

Less than two years after the explosion, Chylak began umpiring amateur baseball and eventually moved up to call minor league games. In 1954, Chylak made his major league debut as an American League umpire.

Over the next 25 years, Chylak served as an important figure in many of the game’s memorable moments, including five All-Star Games, three League Championship Series and five World Series. He was behind the plate for Sandy Koufax’s final game in the 1966 World Series and the Toronto Blue Jays’ first home game in 1977.

"I umpired for 25 years and can honestly say I never called one wrong in my heart," Chylak once said. "The way I see it, an umpire must be perfect on the first day of the season and then get better every day."

On June 4, 1974, Chylak was the crew chief for the infamous “10-Cent Beer Night” promotion in Cleveland that ultimately resulted in forfeit by the Indians and Chylak being hit over the head with a chair.

In addition to his skill as an arbiter, Chylak was admired by players, managers and executives for his quick wit.

“This must be the only job in America that everybody knows how to do better than the guy who is doing it,” Chylak said.

“The big thing about Nestor is that I respected him not only for his ability but for his enthusiasm at all times,” said White Sox broadcaster Jimmy Piersall. “Every day was a challenge for him to be good.”

Following his retirement in 1978, Chylak became a member of Sports Illustrated’s Speakers’ Bureau and gave speeches about the lessons he learned from baseball.

“Very few of us reach what Nestor reached – the best at his job,” said longtime Tigers player and coach Dick Tracewski. “And he was absolutely the best.” 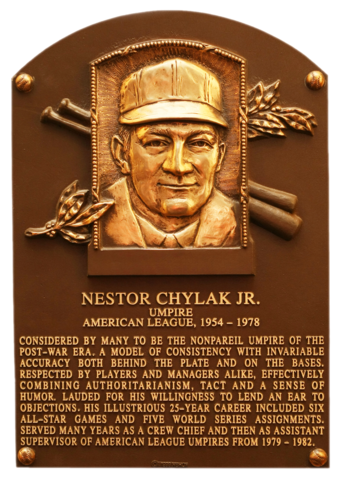 that Nestor Chylak was the crew chief for the infamous 10-cent Beer Night promotion in Cleveland, June 4, 1974, that ultimately resulted in a forfeit to the visiting Texas Rangers?

More info on Nestor Chylak
Retrosheet.org
"Nestor is one of the ultra, ultra good umpires. And the players respond to him. He's a good hustler. He always seems to be at the right place at the right time. "
Johnny Pesky