"Your job is to umpire for the ball and not the player." – Bill Klem

While the mark of a good umpire is often to go unnoticed throughout the course of the game, National League umpire Bill Klem was a colorful exception.

Known affectionately as “The Old Arbiter,” Klem was a pioneer for umpires across the major leagues during his 37 years on the diamond. He was the first umpire to wear a chest protector, and also one of the first to use visible arm signals to coincide with his calls.

"That guy in a twenty-five cent bleacher seat is as much entitled to know a call as the guy in the boxes,” Klem explained. “He can see my arm signal even if he can't hear my voice."

Klem began his life in baseball as a catcher in the Canadian League until arm injuries cut his playing career short. In 1901, Klem followed the footsteps of hometown friend and NL umpire Frank "Silk" O'Loughlin by calling his first game between the New York Cuban Giants and a semi-pro team from Berwick, Maine. In four years, Klem worked his way up from umpiring Class D baseball games for five dollars to calling balls and strikes in the National League.

From 1905-1941, Klem built a reputation as one of the most respected game callers in the Senior Circuit. He spent the first 16 years of his career behind the plate because of his superior ability to call balls and strikes. Always seeking the best view of the action, Klem taught his fellow umpires how to stand slightly to the side and work the “slot” between the catcher and the batter.

"Fix your eye on the ball from the moment the pitcher holds it in his glove,” Klem said. “Follow it as he throws to the plate and stay with it until the play is completed. Action takes place only where the ball goes."

Perhaps the best example of Klem’s reputation in the game lies in his record 18 World Series assignments. He was also known as a man who wasn’t afraid to throw anyone out of a game if they were out of line – including the normally chivalrous Christy Mathewson in 1904. In 1941, Klem was promoted to be chief of National League umpires – a post he served in until his retirement in 1951.

Two years later, Klem joined American League umpire Tom Connolly as the first two umpires to be elected to the Hall of Fame. It was the ultimate recognition for Klem, a man who devoted himself to maintaining the integrity of the game.

"Baseball is more than a game to me,” Klem said. “It's a religion." 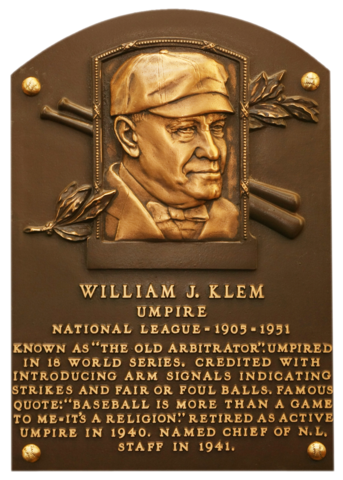