While the word “umpire” most often evokes images of an older sage in the minds of baseball fans, fresh-faced Billy Evans was anything “old” when he debuted as an American League umpire in 1906.

At a remarkable 22 years of age, Evans became the youngest umpire in major league history and began a 22-year career in which he worked six World Series.

Furthermore, Evans was a baseball renaissance man. He was an accomplished sportswriter at the same time he was an umpire, and later became a front office executive for three major league teams.

Evans grew up in Youngstown, Ohio, and later studied law at Cornell University where he played baseball under the tutelage of future Hall of Famer Hughie Jennings. When his father’s death forced him to leave college to support his family, Evans became a newspaper reporter for the Youngstown Vindicator. He was covering a baseball game when the scheduled umpire failed to show up. Evans was persuaded to officiate the contest and impressed the players and crowd so much that he was offered an umpiring contract for $150 a month.

Financially motivated to take on a second career, Evans umpired for two years in the minors before American League president Ban Johnson offered him a $2,400 salary to officiate in the junior circuit. Years later, Evans claimed that he broke all sorts of speed records to find a telegram and send his simple reply to Johnson: “Yes and thanks!”

At age 22, Evans entered the American League during a challenging era when umpires often called games alone. In 1907, Evans single-handedly worked seven doubleheaders in eight days. Later that season, he suffered a fractured skull when a glass bottle thrown by a spectator knocked him unconscious.

The New York Times described the incident as “one of the most disgraceful scenes ever witnessed on a ball field.” Evans, however, refused to press charges.

As Evans’ career in baseball progressed, he became known as an innovator among umpires. He was among the first to run down the first base line to follow a play, and treated players with great respect. Evans was also an early advocate for improving umpires’ standing in the game, calling for the establishment of formal schooling for game callers.

When asked to describe what makes a good umpire, Evans replied, "Good eyes, plenty of courage – mental and physical – a thorough knowledge of the playing rules, more than average portions of fair play, common sense and diplomacy, an entire lack of vindictiveness, plenty of confidence in your ability.”

Evans was also distinct from other umpires in how open he was in admitting his fallibility. Yet he was also firm in believing his calls were final as soon as he made them.

"I missed a lot of decisions," Evans once admitted. "At the time of making such a decision there was no doubt in my mind as to its correctness. However, a second or two later I felt that I erred and wished I could change my original ruling.”

While Evans earned respect on the diamond, he was also making a living in the press box. From 1918-28, Evans served as sports editor of the Newspaper Enterprise Association and wrote a weekly syndicated column entitled “Billy Evans Says.” When he retired from umpiring, Evans moved up to the front office and became one of the the first executives to carry the official title of “General Manager” with the Cleveland Indians.

Evans lifted the Indians back up to the AL’s first division before moving on to direct the Boston Red Sox farm system. He served as general manager for the National Football League’s Cleveland Rams for one season before returning to baseball as president of the Southern Association minor league in 1942. Though many other leagues had to shut down during World War II, Evans helped to increase the SA’s attendance by nearly 300,000 during his four-year tenure.

In 1946, Evans returned for one final stint in the major leagues as general manager for the Detroit Tigers. A year later, he penned "Umpiring from the Inside" – a book that would prove to be influential for several generations of young umpires – before retiring from baseball for good in 1951. 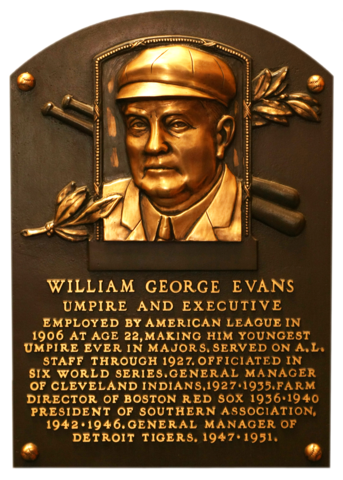 More info on Billy Evans
Retrosheet.org
"Some historians insist that after a soda pop bottle thrown by a St. Louis fan in 1907 fractured the skull of umpire Billy Evans, public animosity toward his trade began to slacken. "
J. Astor