A player, manager, umpire and scout for more than 40 years in the National League, Hank O’Day remains the only person to serve the league in so many capacities.

But it was as an umpire where O’Day made his greatest mark on history in some of baseball’s greatest games. And it’s as an umpire that O’Day earned election to the National Baseball Hall of Fame, just the 10th arbiter to be inducted.

Born on July 8, 1862 in Chicago, O’Day made his major league baseball debut in 1884 as a pitcher for the Toledo Blue Stockings. In his seven-year career, O’Day went 73-110 with clubs like the Pittsburgh Alleghenys, Washington Nationals and New York Giants.

In 1889, O’Day won two games with a 1.17 ERA in the World Series to help the Giants to a 6-3 win over Brooklyn of the American Association. Coming off that successful postseason, O’Day had his best season in 1890, going 22-13. But en route to throwing more than 300 innings, he began to have arm trouble. That was the last season he would play in the big leagues, and O’Day ended his playing career in 1893 in the minors.

He wasn’t gone for long. O’Day returned to the National League as an umpire in 1895 and spent 30 years calling games.

O’Day was chosen to umpire the first modern World Series in 1903 as the only NL ump. He worked in nine other World Series, second-most in baseball history.

In 1908, O’Day was involved in one of the most controversial plays in history. As the plate umpire during a Cubs vs. Giants game, O’Day watched as Al Bridwell of New York appeared to hit a walk-off single to win the game. Fred Merkle, the Giants’ 19-year-old first baseman, was on first base at the time and never advanced from first to second when Moose McCormick – the runner on third base – scored, a common practice of the era. Cubs players produced a ball, and Chicago second baseman Johnny Evers tagged second base, claiming Merkle was out and that the run didn’t count because of the force out. O’Day ruled in favor of the Cubs – and Chicago later won a makeup game to win the National League pennant.

O’Day was the home plate umpire for no-hitters in four decades and also umpired the game in 1920 that featured the only unassisted triple play in World Series history – one of 10 World Series appearances.

O’Day retired following the 1927 season and remained active in the National League as a scout for new umpires. 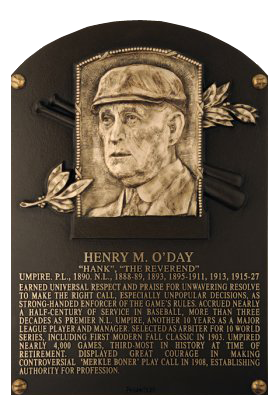 that Hank O'Day umpired in the first modern World Series in 1903?

More info on Hank O'Day
Retrosheet.org
"O’Day was the greatest in his line, bar none. O’Day was the best umpire the game has ever known. "
Johnny Evers