Tom Connolly officiated the first American League game in 1901 and saw the league’s evolution from upstart to respected equal of the National League during the next three decades.

Known for his calm and dignified demeanor, Connolly possessed a remarkable ability to control the game, so much so that he once went 10 consecutive seasons without ejecting a player during one of the toughest eras in baseball history.

“A well-groomed, alert umpire adds dignity to a ball game,” Connolly once explained. “And a good official is one who never attracts attention.”

An Irishman who played cricket as a boy, Connolly was fascinated by the new American game when his family immigrated to Natick, Mass. He immersed himself in the rules of baseball and worked as an umpire for YMCA games when he was discovered by major league umpire Tim Hurst in 1894.

Hurst set Connolly up with an umpiring job in the New England League, where Connolly worked for three seasons until he was promoted to the National League in 1898. In 1900, Connolly resigned mid-season when NL president Nicholas Young failed to stand behind his calls. The following spring, Connolly signed with the new American League and was the sole arbiter for the league’s first official contest on April 24, 1901.

Connolly was an authority figure during an era that featured rough-and-tumble play. Though he was normally even-tempered, Connolly showed he could stand up to the game’s toughest players – including when he called Ty Cobb out for stepping across home plate during a swing.

"You can go just so far with Tommy," Cobb once said of Connolly. "Once you see his neck get red, it's time to lay off."

Standing 5-feet-7 inches tall and weighing 140 pounds, Connolly famously stood in front of Babe Ruth when the Bambino began to charge a heckler in the stands.

“You should be ashamed of yourself,” Connolly told Ruth, then promptly ejected him. It was the last time Ruth would be thrown out of a major league game.

Connolly’s reputation was rewarded with many high-profile assignments. He was the lone AL umpire chosen to work the first modern-day World Series in 1903, the first of eight Fall Classics that he would eventually officiate. Connolly went on to work the opening games at Comiskey Park, Shibe Park, Fenway Park and Yankee Stadium. He called balls and strikes for four no-hitters, including Addie Joss’s perfect game in 1908.

In 1931, AL president Will Harridge responded to complaints about the quality of officiating by appointing Connolly as the league’s first supervisor of umpires. For the next 23 years, Connolly scouted and trained new umpires and became known as the greatest authority on the rules of baseball.

When asked how he trained umpires, Connolly explained, “If they're otherwise all right, what you have to teach them is poise. And another thing I tell ’em is not to have rabbit ears. Never mind the wrecking crew in the dugout. Just go about your job of calling ’em on the field.”

In 1953, Connolly joined the National League’s Bill Klem as the first two umpires to be elected to the Hall of Fame. It was a remarkable accomplishment for a man who had never seen a baseball game until he arrived in America at age 13.

“Although he may have lacked the color of a Bill Klem,” wrote The New York Times, “Mr. Connolly was perhaps the perfect umpire.” 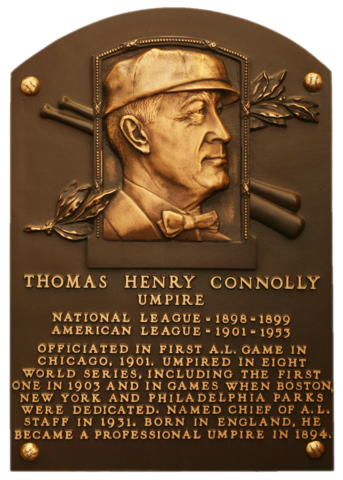 More info on Tom ConnollyRetrosheet.org
"Soft-spoken, a master of the rules, he was a firm disciplinarian who managed nevertheless to go 10 consecutive years of rambunctious games and arguments without ejecting a single player. "
J. Astor, Hall of Fame 50th Anniversary Book