Al Barlick’s rise to becoming one of baseball’s most revered umpires began in a coal mine in Springfield, Ill.

In 1935, Barlick was helping his father in Springfield’s Peabody mine when a friend asked if he could fill in as an umpire for the local municipal league games. Five years later, Barlick debuted behind the plate in a doubleheader at Shibe Park, becoming one of the youngest umpires in major league history at age 25.

During the next 27 seasons as a National League umpire, Barlick would call seven All-Star Games and seven World Series.

Known as one of the loudest umpires in the game, Barlick was respected by peers and players alike for his hustle, stern demeanor and a strict-but-fair, interpretation of the rules. He called his first All-Star Game in just his second full major league season before serving in World War II with the United States Coast Guard from 1943-45.

When he returned to baseball, Barlick was a crew member for the 1946 World Series at age 31.

“The boy is a natural,” proclaimed Hall of Fame umpire Bill Klem. “If Barlick’s grandmother and his worst enemy were out there on opposite sides of a ball game, he would call everything the way he sees it, favoring neither side. He’s going to be the best umpire in history.”

Barlick was a part of many historic moments during his nearly three decades in baseball. He was the first base umpire and stood directly behind Brooklyn Dodgers first baseman Jackie Robinson when Robinson broke baseball’s color barrier on April 15, 1947. Barlick worked six no-hitters, along with the first games at Los Angeles’ Dodger Stadium, Houston’s Astrodome and Pittsburgh’s Three Rivers Stadium. He was also a crew member for the first National League Championship Series in 1969.

“I think the greatest testimony for [Barlick] was what is said about any good umpire: You never knew he was there,” said St. Louis Dispatch sports editor Bob Broeg.

In 1961, a poll conducted by the Sporting News determined that Barlick was the most respected umpire in the National League among managers and coaches. Displaying his characteristic humility, Barlick brushed off the distinction, stating, “The very idea of the ratings is unfair in that they place labels on hard-working officials who always try to do a good job.”

In September 1963, Barlick requested that he call the final game for Stan Musial, one of his favorite players. But true to his unbiased character, Barlick did Musial no favors once the game began, calling the future Hall of Famer out on strikes in his first at-bat.

“I think I earned the players’ respect – and that’s the ultimate in life, isn’t it?” Barlick would later say. “I didn’t care if they liked or disliked me, as long as I had their respect.”

Later in 1963, Barlick was instrumental in organizing the first umpires’ union. Throughout his career, Barlick was a vocal advocate for better pay and respect for game-callers.

“We umpires have to shoulder the too much blame,” Barlick said. “Yet all we do is enforce the rules. We don’t write the rules, just make certain none are violated.”

In 1971, his final year in baseball, Barlick was honored with an Umpire of the Year Award by his colleagues. 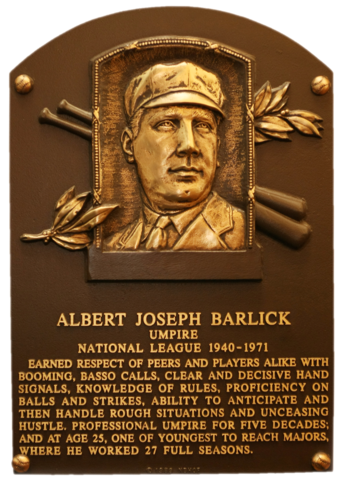 that before his umpiring career, Al Barlick was a coal miner in his home town of Springfield, Ill.?

More info on Al BarlickRetrosheet.org
"I think I earned the players' respect, and that's the ultimate in life, isn't it? I didn't care if they liked me or disliked me, as long as I had their respect. "
Al Barlick 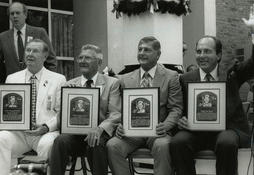 After devoting their life to baseball, Al Barlick and Red Schoendienst received the game’s greatest reward when they were elected to the Hall of Fame.
Explore more Inductees