Many major league players, at some point during their careers, have claimed they could call a game as well as the umpires.

In a 1935 game between the Chicago White Sox and St. Louis Browns, White Sox player Jocko Conlan got the rare chance to do just that – and then never looked back.

Conlan was a reserve outfielder during that fateful July day when umpire Red Ormsby was overcome by the heat. Since there were only two umpires assigned to the game, Conlan was asked to fill in.

Still wearing his White Sox uniform, Conlan worked the second game of the doubleheader and impressed players from both teams with his impartiality.

“I can remember thinking that I didn’t want to show any favoritism to my own team,” Conlan would later recall. “But when I called my teammate, Luke Appling, out at first on a close play, I not only had a helluva argument with Appling, but I also had to fight with my own manager.”

Conlan left the outfield the following year to pursue his new career as an umpire. In 1941, he debuted in the National League and began a long career as one of the game’s most colorful and respected umpires.

From 1941-65, Conlan officiated five World Series and six All-Star Games. He wore a fashionable polka dot bow tie and was the last NL umpire to wear a chest protector over his clothes. Besides his attire, Conlan was known for his ability to combine his cheerful personality with a stern sense of authority.

“He ran the ball game like it was supposed to be run,” said Hall of Fame manager Leo Durocher, who famously clashed with Conlan on several occasions. “He wanted players to hurry in and out of the dugout. He did it his way.”

Conlan officiated three different tiebreaking playoff series, including Bobby Thomson’s “Shot Heard ’Round The World” during the New York Giants’ triumph over the Brooklyn Dodgers in 1951. He was the home plate umpire when Gil Hodges hit four home runs in one game in 1950, as well as when Willie Mays equaled the feat in 1961.

Conlan retired after 25 years of service in 1964 before coming back to serve as a substitute umpire for 17 games in 1965. When he retired for good, National League president Warren Giles proclaimed: “I know of no one who has been more dedicated to his profession, more loyal to the game in which he has been such a big party, and I hate to see him hang up his spikes.”

In 1974, Conlan became the fourth umpire to be elected to the Hall of Fame.

“I lasted all these years in the game because I respected the ball players and demanded their respect, too,” Conlan said. “There have been some pretty good men in umpiring who were chased out. They let the game get them; I never did.” 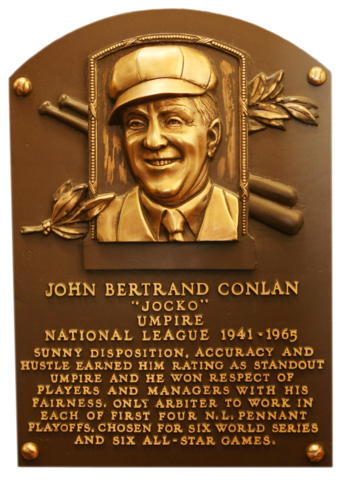 More info on Jocko Conlan
Retrosheet.org
"I know of no one who has been more dedicated to his profession, more loyal to the game in which he has been such a big party, and I hate to see him hang up his spikes. "
Warren Giles