Monday afternoon was a perfect example of how the record book often comes to life in Cooperstown.

Colorado Rockies pitcher LaTroy Hawkins was making his way around the third floor of the Hall of Fame with Tom Shieber, senior curator at the Museum, when he stopped to check out the interactive records display in the One For The Books exhibit. After toggling over to the category for most appearances by an active pitcher, Hawkins looked up to see a picture of someone very familiar: Himself.

“Before that I was only in here because I was on the losing end of a perfect game,” Hawkins joked, “so this is pretty exciting.”

Hawkins was referring to a start he made for the Minnesota Twins on May 17, 1998, when opposing pitcher David Wells of the Yankees threw his perfect game at Yankee Stadium. Indeed, Hawkins has seen just about everything over 20-plus years of pitching in the major leagues. He currently ranks 13th all-time with 1,021 appearances – one of only 16 pitchers in history to have appeared in at least 1,000 games. At age 42, he is also the oldest active player in the big leagues. To put it another way for stat geeks: He is the only player to have appeared in every edition of the Baseball Prospectus annual. 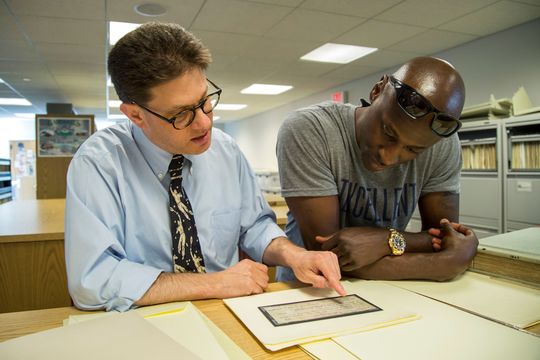 Colorado Rockies pitcher LaTroy Hawkins (right) looks at a promissory note from the sale of Babe Ruth from the Boston Red Sox to the New York Yankees during a visit to the Hall on July 13, 2015. (Parker Fish / National Baseball Hall of Fame)

I’m glad I waited until the end of my career to come here...to come here where baseball is preserved and is in its greatest state is pretty exciting.

Hawkins began his afternoon in Cooperstown by accompanying Shieber on a tour of the Museum Library, where they flipped through his player file and looked over historic documents, including an old program from a Negro League doubleheader in 1938, and the official Major League Baseball record tallies from Jackie Robinson’s historic 1947 season.

After that, Shieber and Hawkins traveled downstairs to check out artifacts from the Museum collection. Hawkins lit up when he saw a box of signed baseballs from Hall of Famer Kirby Puckett (Hawkins is the last active player who is a former teammate of Puckett, with the Twins in 1995), and marveled at a baseball from an 1865 game between the Brooklyn Excelsiors and Philadelphia Athletics.

“I couldn’t use that,” Hawkins said, thumbing the smooth ball with a smile. “When I get a new ball out on the mound, you’ll see me working on that thing and raising the seams as soon as I get it.”

Just like many fans when they come to the Hall, Hawkins appeared to be in awe to be surrounded by artifacts and mementos of the great players who came before him. He cited passing Cy Young’s 906 career appearances, for instance, as a highlight of his career. 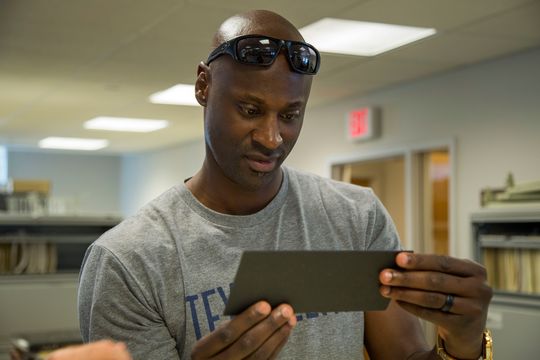 Colorado Rockies pitcher LaTroy Hawkins holds a promissory note from the sale of Babe Ruth to the New York Yankees during a visit to the Hall on July 13, 2015. (Parker Fish / National Baseball Hall of Fame)

“That’s one [achievement] that really stuck out to me,” Hawkins said. “Passing a name like Cy Young? That was really cool.”

Now, as Hawkins gets set to begin the final second half of his career, the Rockies’ right-hander said he was grateful that he took advantage of the All-Star break to visit the Hall of Fame.

“I’m glad I waited until the end of my career to come here,” he said. “It’s more exciting for me knowing that I’ve been a huge part of baseball for almost a quarter century. So to come here where baseball is preserved and is in its greatest state is pretty exciting.” 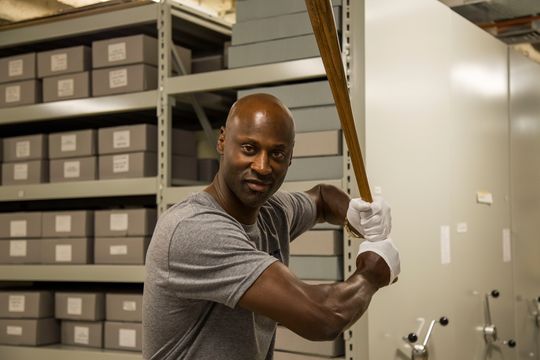 Colorado Rockies pitcher LaTroy Hawkins poses with a bat in the Museum collection during a visit to Cooperstown on July 13, 2015. (Parker Fish / National Baseball Hall of Fame)