Former major leaguer Scott Brosius has experienced a lot of remarkable things during his three-plus decades in baseball.

He scored a run in the MLB All-Star Game. He made the old Yankee Stadium shake with a dramatic World Series home run. He coached his alma mater to its first NCAA Championship.

But for all the things he’s done on his remarkable journey through the game, there was still one thing left for Brosius to do: Visit the Hall of Fame.

The former Oakland Athletics and New York Yankees third baseman toured the Museum on June 18 with his wife, Jennifer, and his son David, who will begin playing college baseball at Oregon State University this fall. Scott has just completed his final season of coaching baseball at Linfield College in McMinville, Ore., where he led his alma mater to three straight appearances in the Division III NCAA Tournament and its first national championship in 2013.

The Brosius family made sure to stop in Cooperstown before making their way to the Bronx to participate in Old Timer’s Day this Saturday at Yankee Stadium.

“This is so great because we’ve been trying to come here for such a long time,” said Brosius, who lives just outside Portland. “I know that I’m just a minor blip in the grand history of baseball, but to see all these things that are associated with all these legends of the game is just really special.” 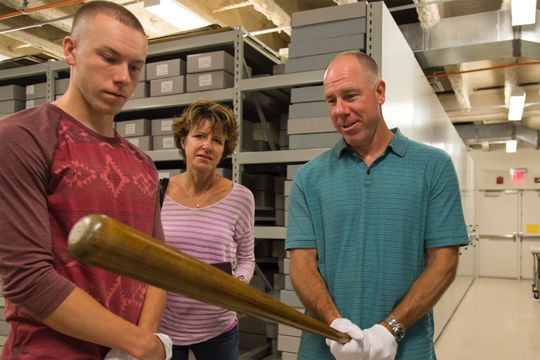 Accompanied by Erik Strohl, vice president of exhibitions and collections at the Hall, the Brosius family began its tour in the Plaque Gallery. They looked at the plaques of the original Hall of Fame Class of 1936, as well as the Class of 2014 – which included Brosius’ former Yankees manager, Joe Torre, and a player he knew well from his days in the minor leagues.

“Frank Thomas and I played against each other in Double-A ball (in the Southern League in 1990),” Brosius recalled when he saw Thomas’ plaque. “He had about 20 home runs at the All-Star break and he said, ‘I’ve been around this league once now, I think it’s time to move up.’

“I remember thinking to myself, ‘Who is this guy?’ Well, he went up through Triple-A and into the majors pretty quick and as you can see, I guess he never looked back.”

They continued up to the Museum library, where Strohl gave them an in-person glimpse at some of the most historic documents in baseball history. These included a page of box scores from an 1865 issue of the Yankee Clipper, published just weeks after the assassination of President Abraham Lincoln, and an original copy of the first issue of Sports Illustrated, featuring Hall of Famer Eddie Mathews on the cover.

“That’s a good looking swing there,” Brosius said to his son. 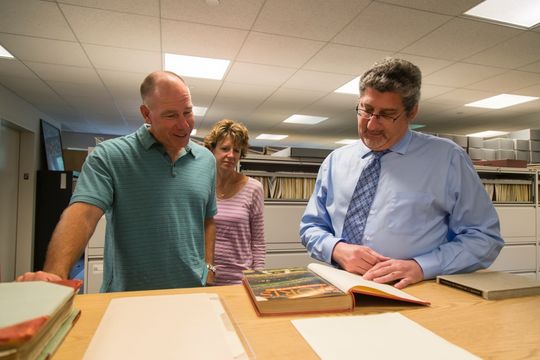 Erik Strohl, vice president of exhibits and collections at the Hall, shows Scott and Jennifer Brosius an original copy of the first issue of Sports Illustrated magazine from August 16, 1954, featuring Hall of Famer Eddie Mathews on the cover. (Parker Fish / National Baseball Hall of Fame)

“I know some guys are a little hesitant to give away their stuff, but when you guys came and asked me for these bats, I just said, ‘Are you kidding me? Yes!’ Anything I can do to get in this place, I will.”

After the library, Strohl took the Brosius family down to the Museum collection. Donning white gloves, they examined various artifacts that spanned across the history of the game, from a baseball made in the 1850s to light fuses from the Astrodome scoreboard to the ball from Randy Johnson’s 300th victory.

As Jennifer did her best to take pictures and capture the moments, Scott and his son geeked out on the various bats in the collection. Brosius, who hit .300 and drove in 98 runs himself in 1998, asked many questions about the size and weights that Hall of Fame players preferred.

He also got a chance to hold two of his own bats: One from the 1998 World Series when he batted .471 and was named Most Valuable Player, and the other from the 2001 World Series when he hit a game-tying home run in the ninth inning of Game 5 that led to the Yankees’ second consecutive come-from-behind win.

“Everyone always asks me about that moment,” Brosius said of that Game 5 home run, which followed the late game heroics of Tino Martinez and Derek Jeter in Game 4, “and I just remember running around the bases and thinking to myself: ‘No way did that happen twice.’ It was a great moment, but this bat from the ’98 Series is actually a sweeter memory for me, because we won the Series.”

As he held the bats of legends like Ted Williams and Hank Aaron, Brosius said he was grateful to have his former equipment housed in the same place.

“I know some guys are a little hesitant to give away their stuff,” Brosius said, “but when you guys came and asked me for these bats, I just said, ‘Are you kidding me? Yes!’ Anything I can do to get in this place, I will.”

But perhaps one of the biggest thrills of all for Brosius was to share his day at the Hall with his family. He said he was glad his son got to experience the moment before he begins writing his own chapters in baseball this fall.

“I loved seeing David hold the artifacts and look at all this history, and to kind of see what he thought was cool,” Brosius said. “It was a great father-son moment.” 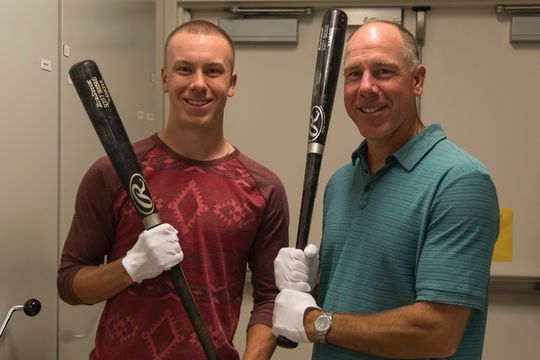 Scott Brosius (right) and his son David hold a pair of bats -- one from the 1998 World Series in which he was named Most Valuable Player, and the other from the 2001 World Series -- that Brosius donated to the Hall of Fame. (Parker Fish / National Baseball Hall of Fame)