The winningest manager in baseball history saw his share of outstanding big-game pitchers. But when Connie Mack had everything on the line, Charles Albert Bender was his guy.

“If everything depended on one game, I just used Albert – the greatest money pitcher of all time,” said Mack of Charles Albert Bender, a full-blooded Ojibwa Indian often called "Chief" who pitched for Mack for the Philadelphia Athletics from 1903-14. “I’d tell Albert when I planned to use him in a crucial series. Then I relaxed. He never let me down.” 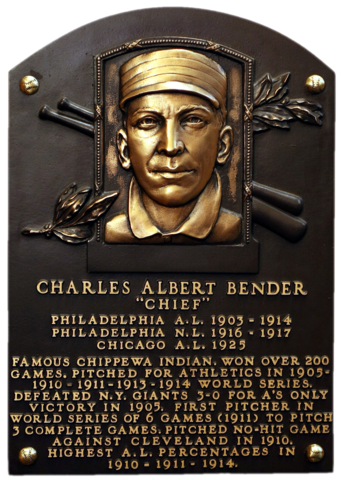 that Charles Bender is credited as being one of the inventors of "the nickel curve", also known as the slider?

"If I had all the men I’ve ever handled and they were in their prime and there was one game I wanted to win above all others, Albert would be my man. "
Connie Mack