“Charlie was a tremendous left-handed hitter who could also bunt, steal a hundred bases a year, and cover center field as well as anyone before him or since…he was like Ty Cobb, Babe Ruth and Tris Speaker rolled into one.” – Buck O’Neil

As a youth, Oscar Charleston was a batboy for his hometown Indianapolis ABC’s. At the age of 15, he enlisted in the military and was sent to the Phillipines, where he played baseball with the 24th Negro Infantry. In 1915, still a teenager, Charleston returned to Indianapolis and quickly became a star center fielder for the ABC’s. The next year, he led them to the first of many championships in his career.

A powerful hitter who could hit to all fields and bunt, Charleston was also extremely fast on the base paths and in center field. He played a very shallow center, almost behind second base, and his great speed and instincts helped him outrun many batted balls. He had a powerful arm. Coupled with this great natural ability was an aggressive demeanor and will to win.

From the mid-1920s on, he was a player-manager for several clubs. In 1932, he joined the Pittsburgh Crawfords and would manage the 1935 Crawfords club that many consider the finest Negro League team of all time, featuring four future Hall of Famers including himself: Cool Papa Bell, Josh Gibson and Judy Johnson. Charleston hit three home runs in leading the Crawfords to victory in the seven-game championship in 1935 against the New York Cubans.

He played nine seasons of winter ball in Cuba, amassing statistics quite similar to his Negro League achievements. In the 1940s, Charleston scouted for Branch Rickey, making recommendations on the best players to consider for the job of integrating the major leagues. He managed as late as 1954, when he led the Indianapolis Clowns to a league championship. 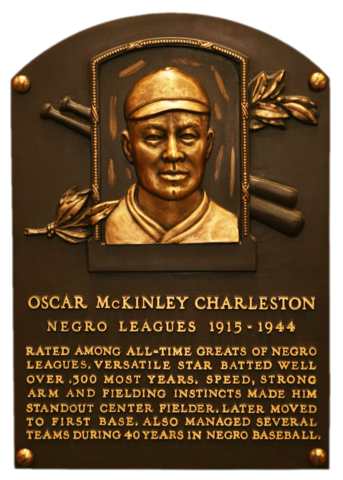 that as a member of the St. Louis Giants of the Negro National League, Oscar Charleston became the first African-American player to hit a home run at Sportsman's Park, the longtime home of the St. Louis Cardinals and Browns?

"Some people asked me, 'Why are you playing so close to the right-field foul line?' What they didn't know was that Charleston covered all three fields, and my responsibility was to make sure of balls down the line and those in foul territory. "
Dave Malarcher