“People nowadays just don’t realize how great a hitter Harry was. Next to Rogers Hornsby, he was the best right-handed hitter of them all.” – Ty Cobb

Though somewhat overshadowed because he shared the outfield in Detroit with Ty Cobb, Harry Heilmann was one of the greatest players of his generation. He played 17 years in the big leagues, ending his career with a .342 batting average, surpassed only by Rogers Hornsby and Ed Delahanty among modern-era players for the right-handed career batting average record. Heilmann won four batting titles and hit .403 in 1923 to lead all of baseball.

Heilmann struggled to hit at first and then took half of 1918 off because he entered the Navy in World War I. Upon returning to baseball in 1919, Heilmann found his swing, hitting .300 for the first time in his career. Heilmann would take advantage of the end of the dead ball era and truly break out in 1921, however. With Ty Cobb taking over as manager, Heilmann moved from first base to right field and his hitting took off. Heilmann won his first batting title that season, hitting .394 with a career-high 139 RBI. Heilmann became the first right-hander to win the American League batting title since Napoleon Lajoie in 1910.

As Heilmann established himself as one of the game’s biggest stars, the Tigers’ outfield became one of the best in the history of the game. Heilmann and Cobb were joined at first by Bobby Veach, who led the AL in RBI three times, and later by Hall of Famer Heinie Manush.

Heilmann made a habit of winning batting titles every other year, taking the crown in 1921, 1923, 1925 and 1927. But as quickly as it had started for Heilmann, it was over. Arthritis in his wrists hampered him, though he continued to post good statistics, the pain became too much. He didn’t play in 1931 before attempting a failed comeback in 1932.

Heilmann retired for good after 17 seasons in the big leagues. 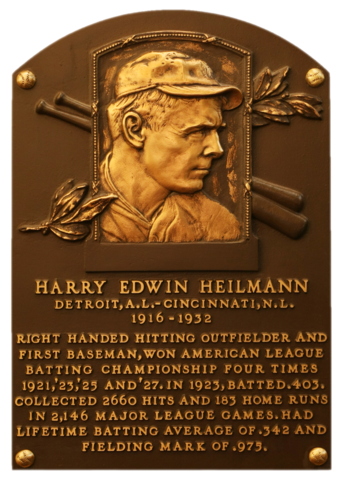 That in July of 1916, Harry Heilmann saved the life of a woman who nearly drowned in the Detroit River?

"Harry Heilmann was one of the most marvelous men I ever met in baseball and one of the greatest right-handed hitters. He had a choppy stroke, but powerful. He was a tough man to pitch to. "
Ted Lyons