His durability was so impressive that almost 80 years after his death, Jake Beckley’s name appeared on the computer screens of baseball writers across the world.

But Beckley’s ability to play every day is only part of the story of the powerful first baseman whose standards still top the record books.

Beckley played 19 National League seasons with the Pirates, Giants, Reds and Cardinals and one season with Pittsburgh in the Players League from 1888-1907. He played 2,383 of his 2,392 games at first base, setting a big league standard that was not eclipsed until 1994.

Born Aug. 4, 1867 in the town Mark Twain made famous – Hannibal, Mo. – Beckley began his career in semipro leagues before St. Louis of the Western Association sold his contract to the NL’s Pittsburgh Alleghenys in June of 1888 for $4,000. Beckley immediately won the first base job and batted .343 that season.

Beckley was traded to the Giants in 1896, but never found his footing in New York and was released in 1897. Given another chance by the Reds, Beckley’s batting form returned with a .345 average in 97 games in Cincinnati. On Sept. 26 of that year, Beckley hit three homers in a game against St. Louis – a feat no other big leaguer matched until 1922.

From 1899-1904, Beckley topped the .300 mark each season – establishing himself as one of baseball’s best contact hitters and earning the nickname “Eagle Eye.” His skills as a bunter were well known – he could drop a sacrifice with the handle of the bat, holding the thicker end – and he continued to thrive at the plate even after he was beaned by a Christy Mathewson fastball in 1901.

Sold to the Cardinals before the 1904 season, Beckley left the big leagues following the 1907 season but continued to play and manage in the minor leagues. He finished his big league career with 2,938 hits, 1,581 RBI, 1,603 runs scored and a .308 batting average.

In the field, Beckley recorded 23,755 putouts at first base – still the all-time record – and trails only Eddie Murray (by 30 games) on the all-time list for games as a first baseman. When Murray passed Beckley in 1994, the Beckley’s turn-of-the-century accomplishments became news once again. 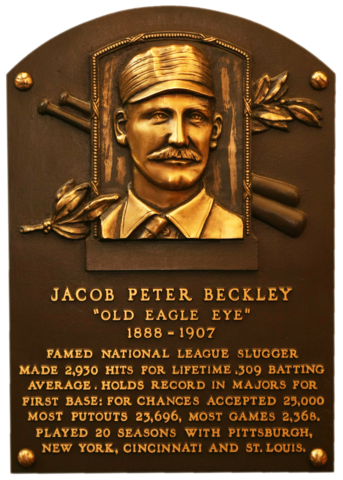 that Jake Beckley's 23,755 putouts at first base are the most ever at the position?

"He was a big, happy, healthy, good-natured, small-town boy who had his full share of good luck in the game and left behind him a big army of pals among players, fans, and writers and who was never guilty of doing a dirty act, never tried to cut down a player or used obscene language against an umpire. "
Daguerreotypes, 1941