Inducted into the Hall of Fame as a player, Hughie Jennings was also a leader on the field, which propelled him to a successful career as a manager after his playing days were over.

For his career, Jennings batted .312 with 1,526 hits, scored 992 runs and stole 359 bases. He also led all shortstops in the league in fielding average four times.

The shortstop was hit by a pitch a record 287 times in his career. In one game in particular, he was hit in the head by a pitch in the third inning and remarkably, he continued to play the rest of the game. But, as soon as it finished, he collapsed and remained unconscious for the three days that followed.

After the 1899 season, in which he played for the pennant-winning Brooklyn Superbas, Jennings went to Cornell Law School and began his managerial career with the university baseball team while also completing his studies. He left campus before finishing his degree in the 1904 season to manage the Eastern League's Orioles, and was hired as the manager of the Detroit Tigers in 1907. He later passed the bar and enjoyed a long career practicing law.

Jennings led the Tigers to three consecutive pennants in his first three seasons with the team and stayed with them until 1920. He compiled 1,131 wins in his 14 years as Detroit’s manager.

The Detroit manager became known for yelling “Ee-yah!” from the coaching box, as a form of encouragement for his players. It became his nickname, and fans would yell the word whenever he came on the field. 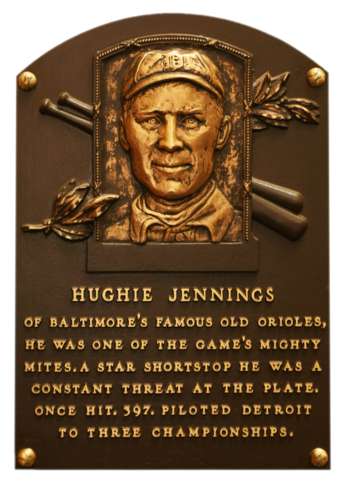 that Hughie Jennings attended law school at Cornell University and later practiced law with his brother in Scranton, Pa.?

"Jennings, in his prime, was the greatest shortstop in baseball. "
Joe Vila, New York Sun